I decided to title the post unknown instead of abandoned, as these tips kind of apply to any situation.  As I love exploring forgotten buildings, I am often faced with a rush of artistic inspiration when I first walk it.  And it is quite easy to get overwhelmed and not really know what to shoot.  So having some things to look for in my head ahead of time helps to cut down on the chaos in my head… and save some time as you never know when you’ll have to leave the area 😉 All the photos below where done during an exploration of a closed recycling plant a month or so ago.

Probably the easiest to do.  Find angles that allow you to capture as much of the scene as possible.  In factories, finding huge rooms and shooting them thinking of the depth and create some lines that lead the viewers eye to the back.  In old houses, trying to capture multiple rooms in one shot. Wide angle lenses are great for this as the distortion created at ultra wide focal ranges (16mm ish) creates a bigger sense of magnitude. 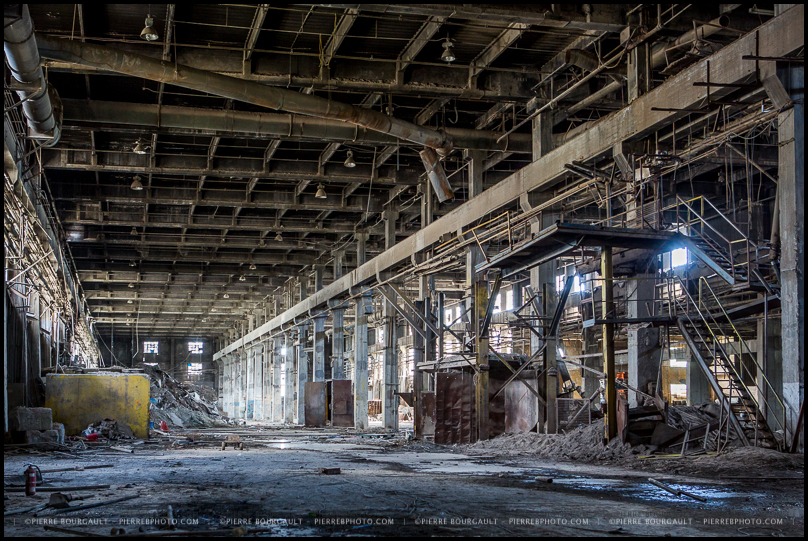 I find this one works well when you shoot in black and white.  Try and find some contrasts of light.  Places where there is dark and light at the same time.  It adds some drama to your photos.  It could be a crack of light coming through a broken garage door, or even finding a dark hallway of lockers that leads to a well light infirmary. 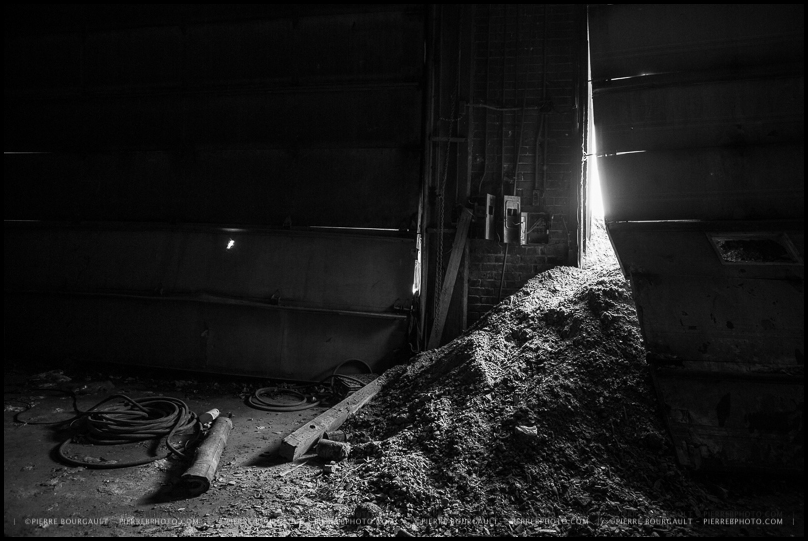 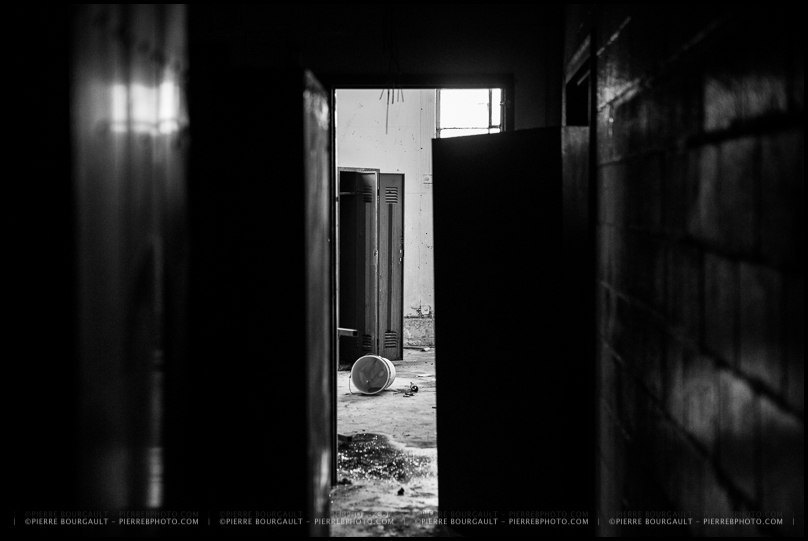 I love finding individual elements that seem alone.  Adds to the story of the place being abandoned.  While finding the item is great, trying to capture the shot and still keep that isolated feel to it.  Chairs sitting there (haha, chair… sitting… sigh), a control panel on the wall. I like to capture the scene a little bit wider, but not as wide as shooting an overall scene like in tip #1.  I also like to capture the item straight on. 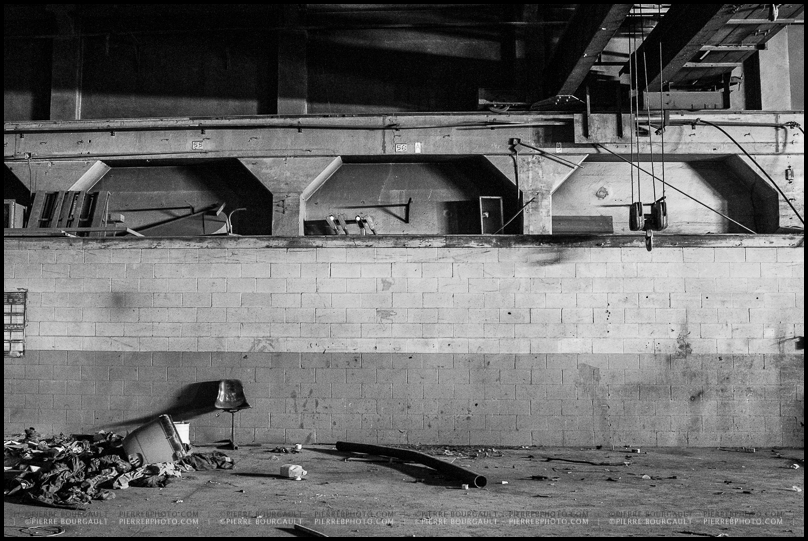 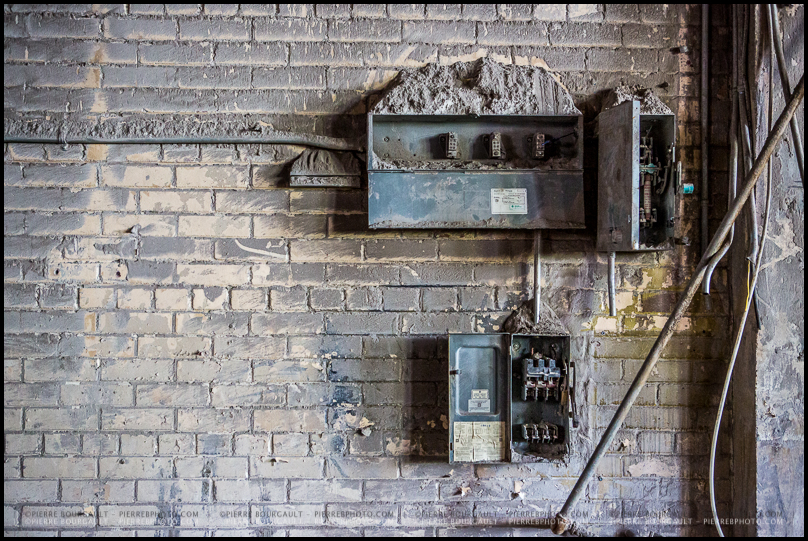 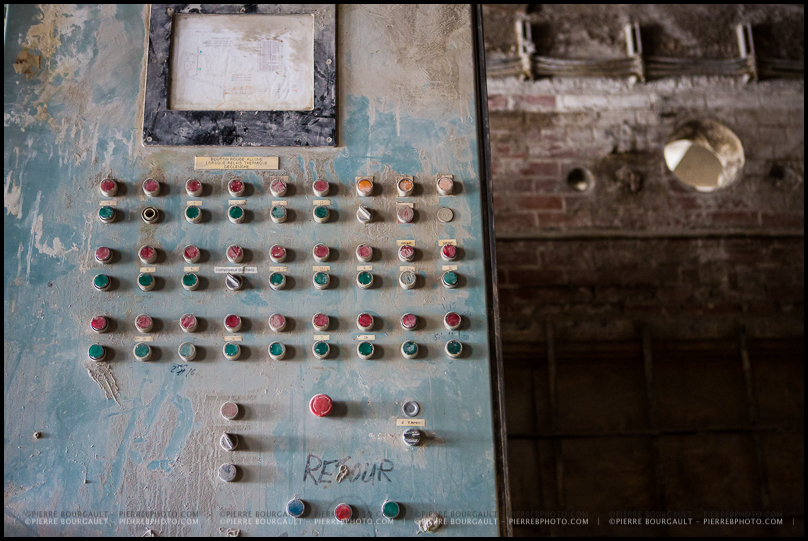 While seeing the wide, open areas is easy, I often have to keep in mind that getting some close up details of the elements is important.  Take the switch board posting just above.  After shooting the image, I loved the buttons, so I moved in closer to capture them.  I did shoot them straight on, but found that moving lower and closer at an angle added some nice lines and depth to the image. The details could be part of something you already shot.  No harm in taking more than one (interesting) image of something.  Or it can be something that just seems misplaced.  In a factory that recycled mostly glass, finding a kid’s basketball was a little bit odd. 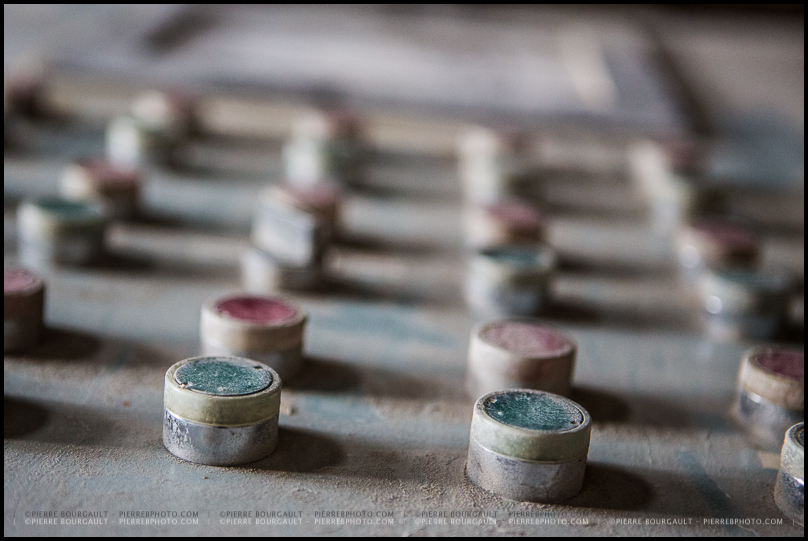 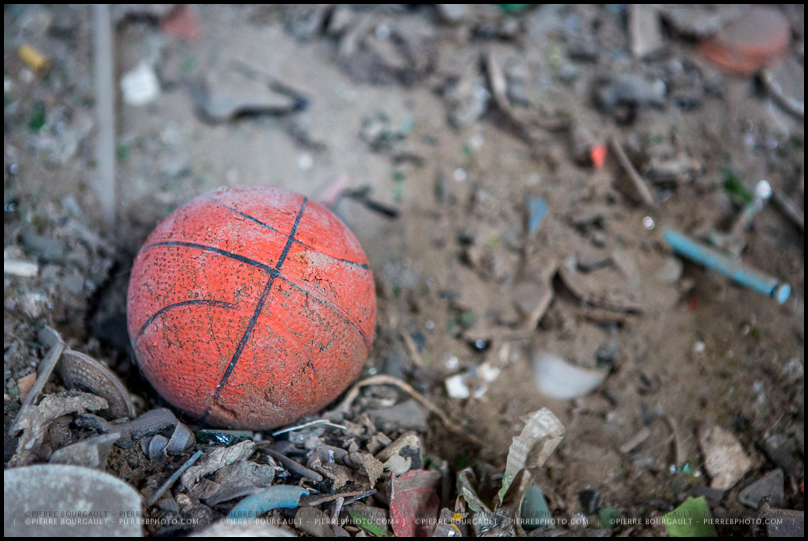 This is probably the funnest thing I look for.  Signs of how the place used to be.  This is the story telling part of the exploration and can include paperwork, business cards, actual signs, gloves, overalls… things that seem to have been left behind. 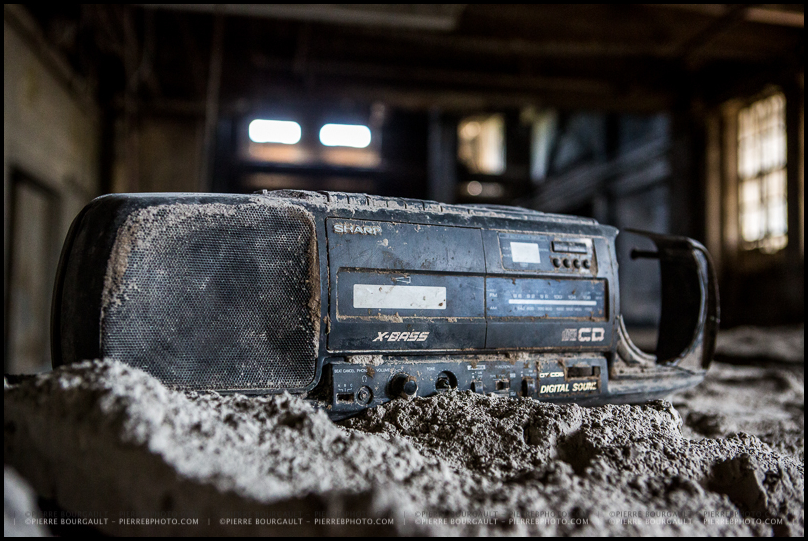 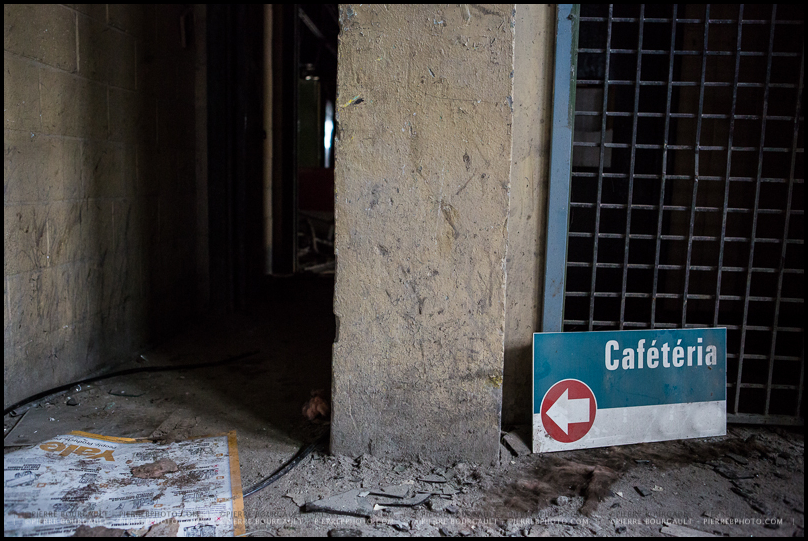 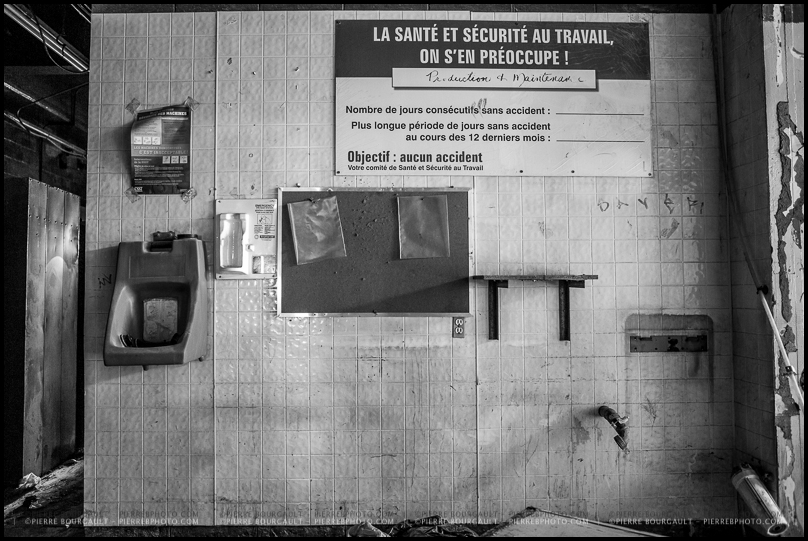 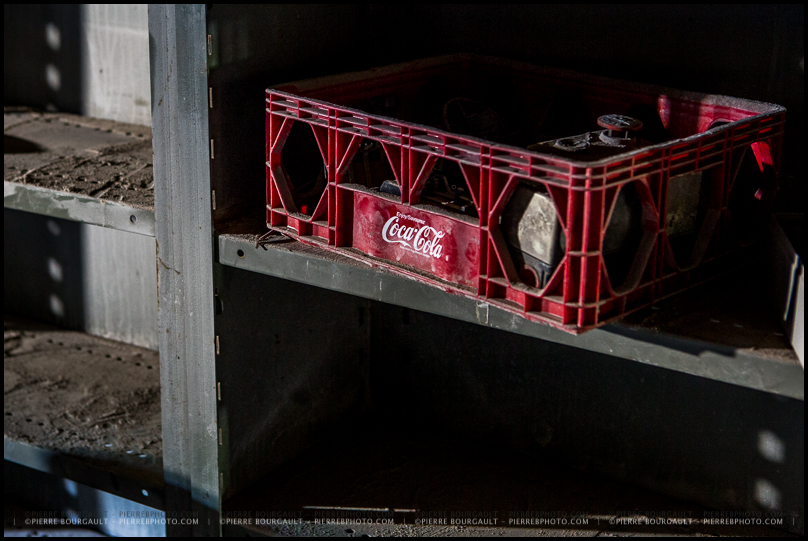 These are the elements that are often left over by other explorers and some vandals.  They are the things that don’t belong, and could leave a bit of a creep factor.  When you are exploring a place, you always have that little bit of an odd feeling.  You could run into an animal, see a junkie, meet other explorers… you never know what’s around the corner and if you can capture some creep factor photos, all the better. 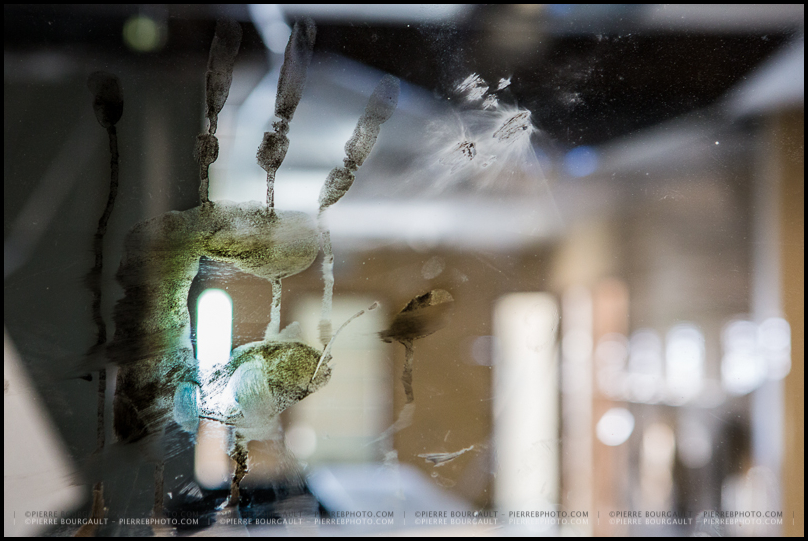 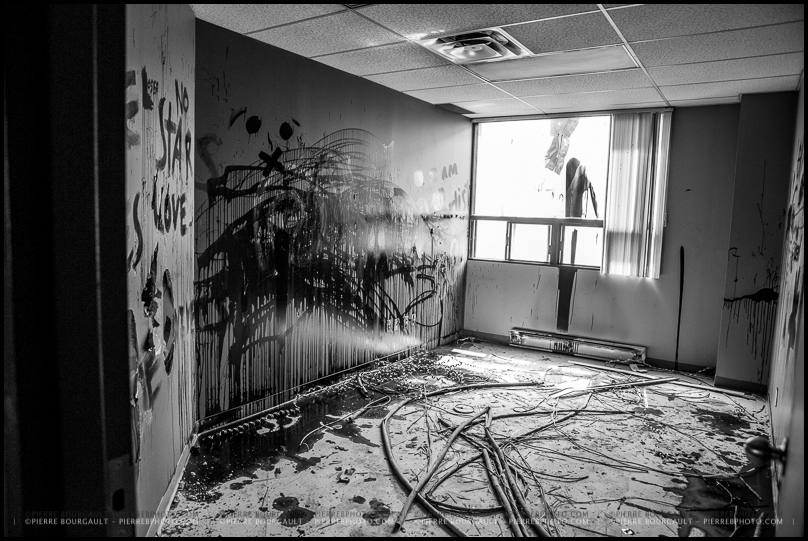 Abandoned placed often have water inside.  Leaky roofs, broken pipes.  Finding pools of water on the group can make some interesting mirror style images. When you shoot pools of water, get down low and close to the water.  Find an angle where you see a good amount of reflection. 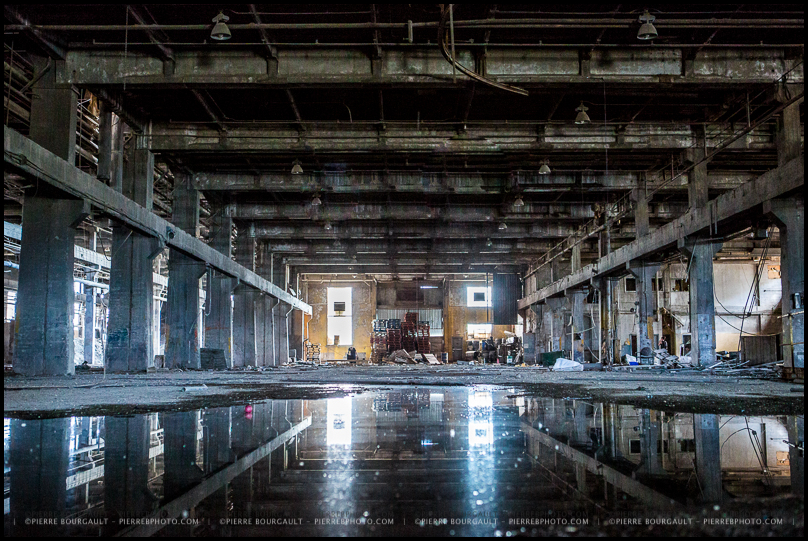 8. Don’t forget the outside

This could be strictly for documentation purposes, but we are often so focused with seeing the inside, that we forget to take some photos outside.  I usually take photos as I walk towards a place and as I leave.  Walking around a building, keeping an eye out for any of the above tips (wide shots, details,…) 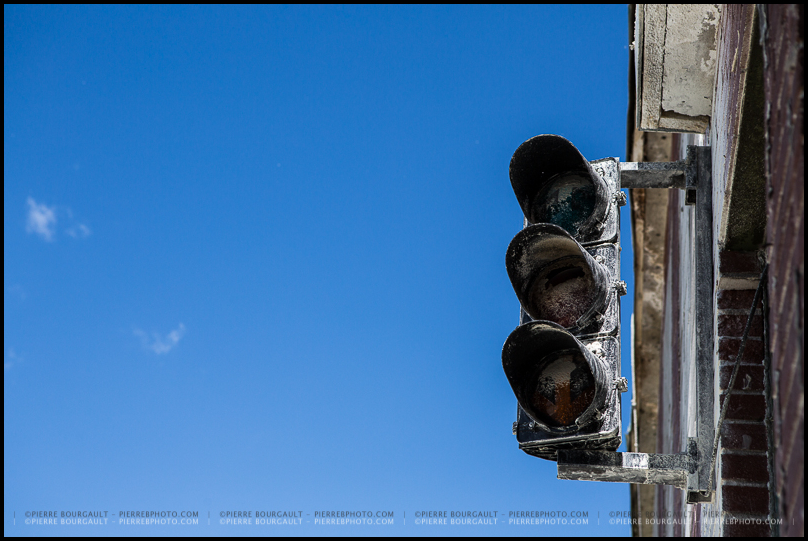 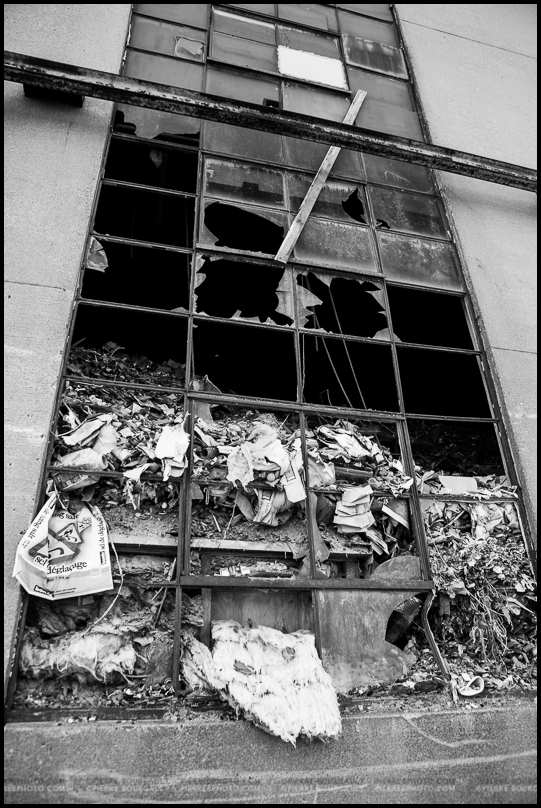 If you are exploring with someone else, keep your eyes open for interesting shots of them.  While it doesn’t tell the story of the building, it tells the story of YOUR exploration. 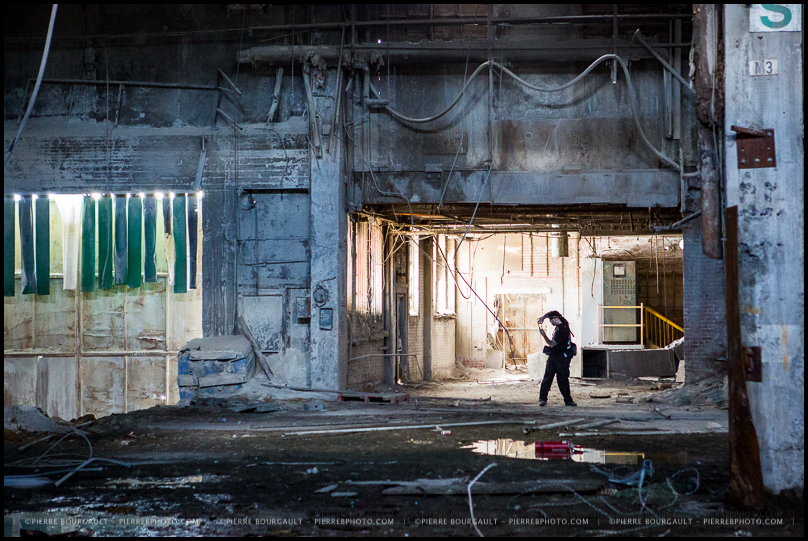 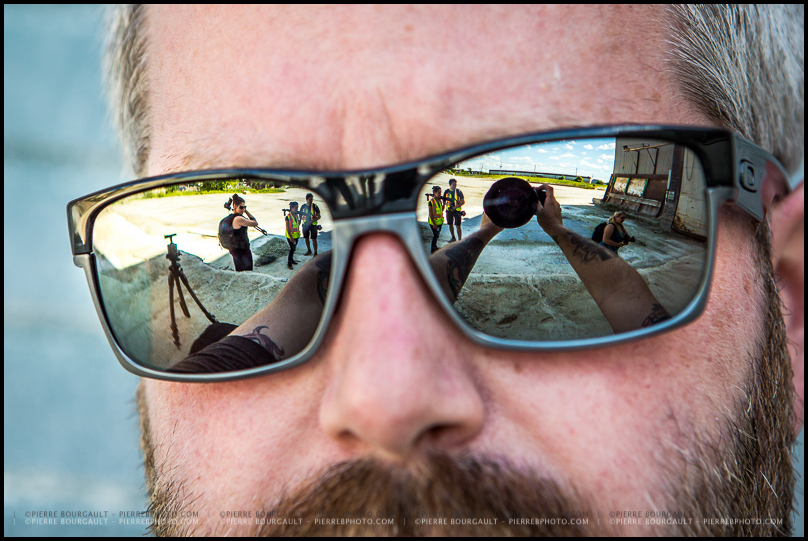 What gear to bring is a very personal taste.

***And not as much of a tip than a way of exploring… when you are in an abandoned place that has history and a real vibe… take nothing and leave only footprints. ***

These little tips are very similar to the standard photojournalism shots that you need to get when covering an event.  You need to get some wide shots that set the scene, some medium shots that tell the story (think people, protest signs,…) and then some close up detail shots. Same goes for shooting concerts where you try and get shots of the entire band, then try and focus on getting images of individual artists, and then some close ups of faces, guitar strings.  Add to that some story telling elements like jump shots, fan interactions and the MOST important (for me) .. .shoes!

*disclaimer: exploring abandoned places can be dangerous.  Be safe.  All of these shots were done with permission from the building owners*