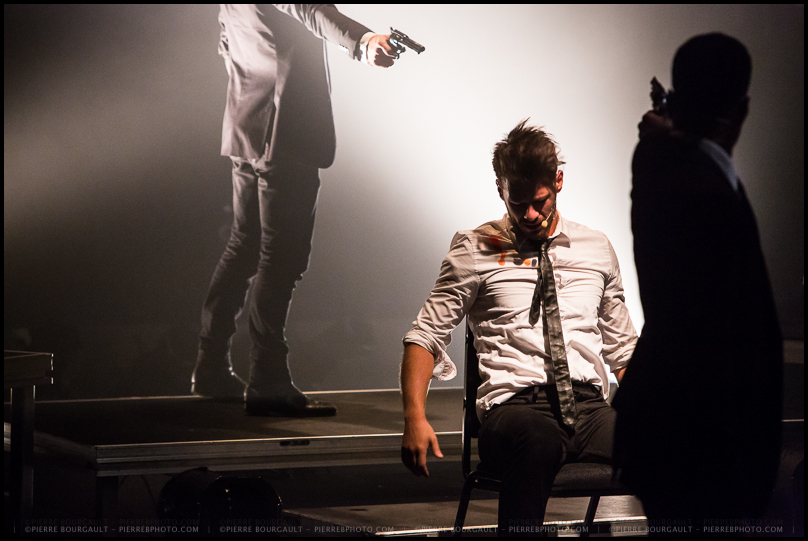 Whether you like his work or not, Quentin Tarantino has made some pretty iconic movies.  For the 2014 edition of Montreal’s Jazz Festival, For The Record: Tarantino in Concert is playing for a few nights at the Cinquieme Salle.  Picture a cabaret style – which they call a 360 degree musical as some action happens in and around the crowd – with guns, lights, dancing, singing, more guns… and a few swear words thrown in for good Tarantino-esque measure.

I was invited down to the final dress rehearsal for the show by Sorstu.ca.  It was pretty much free reign for photos, although I couldn’t move around too much as the actors were in the aisles and moving around the crowd.  The last thing you want to do is trip over an actor while there is a spotlight on you.  So I picked a spot that was a bit closer to the stage than back at the soundboard where the other photogs and video crew were.

Was actually a good choice as I had the action happening in the seat beside me a few times.  Kind of weird turning to your left and seeing Rumer Willis (Bruce and Demi’s daughter) sitting beside you.

With scenes from Pulp Fiction, Reservoir Dogs, Kill Bill, Django, Jackie Brown and others, if you are a Tarantino fan, I’m sure you will appreciate the show.  If you don’t like Tarantino, or don’t know his work, you might want to pass.

You can see a full image set and read an actual review of the show up at Sorstu.ca now 🙂