Discovering Iceland is discovering the vast landscapes that are ever changing.   Driving along the ring road (the main highway) will bring you across the country and you will drive through such a variety of scenery… from lush green fields with mountain backdrops, desert wastelands where the remains of volcano eruptions lay, snow capped mountains, and at times, you will feel like you are travelling through Mars with the moss covered lava rocks.

The one thing you will see plenty of is waterfalls.  From powerful horseshoe shaped falls, to smaller trickles going down the side of a hill.  I found it near impossible to see each and every waterfall in my 2 weeks driving around in a camper… and trust me, I tried.

Here is a collection of some of the known falls I visited, and a few lesser known ones.  The beauty of it all is that I have many more waterfalls left to explore 🙂

You can see a full gallery of waterfall images HERE

**prints of all these images are possible! Just send me a message 🙂 ** 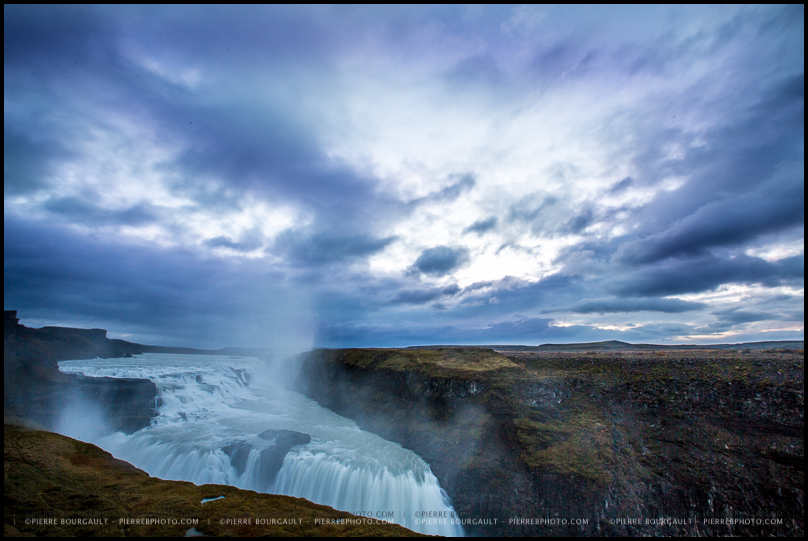 We camped here on our first night.  Well, not AT the falls, maybe a 5 minute walk, in hopes of catching a nice sunrise in the morning.  One of the bigger falls within an hour or so drive of the capital, it’s one of the most popular.  You could walk down to the edge of the fall and get some close up shots, but I felt that this image best represents the odd shape.

We sadly didn’t have that nice of a sunrise (pretty much the theme of our trip hehe). 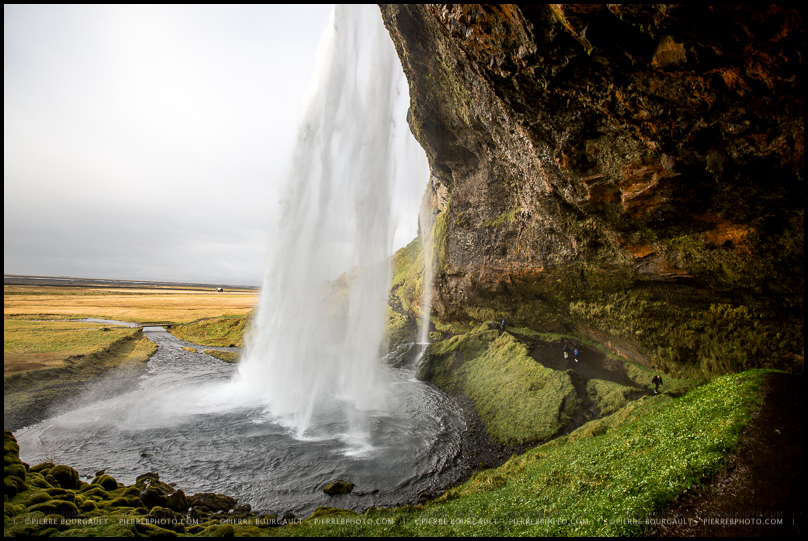 On our second day, we did quite a bit of exploring.  I hadn’t read up too much on the various waterfalls in the southern part of the country, so this was a happy find for us.  It is actually a popular waterfall, with the main attraction being that you can walk all the way behind it (really cool to do).  If you do plan on doing this and taking photos, make sure you bring a dry lens cloth with you as you have a total of 2 seconds before your lens gets covered with water. 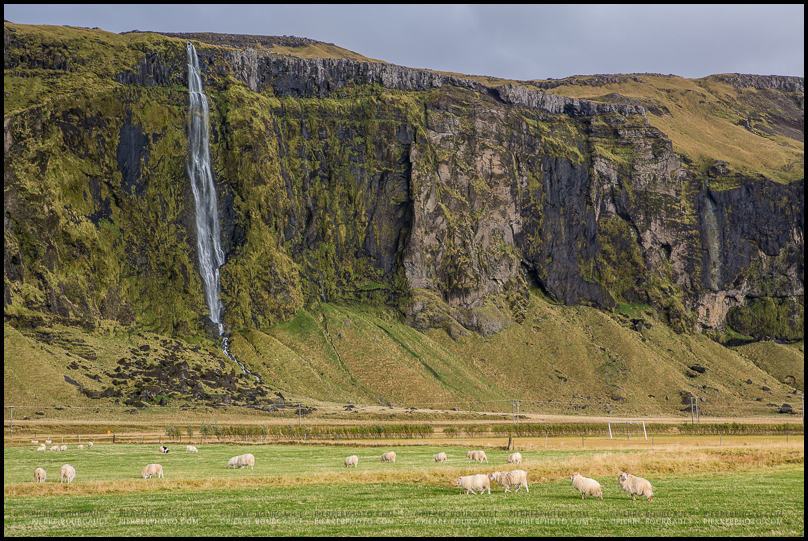 Ok, that name is TOTALLY made up.  But as FOSS means waterfall in icelandic, I thought it was quite fitting haha.  This is an example of what you can see while driving the main road.  There are hundreds if not thousands of these visible around the country.  This one caught my eye as it had some fun sheep in the foreground to add some interest to the image. 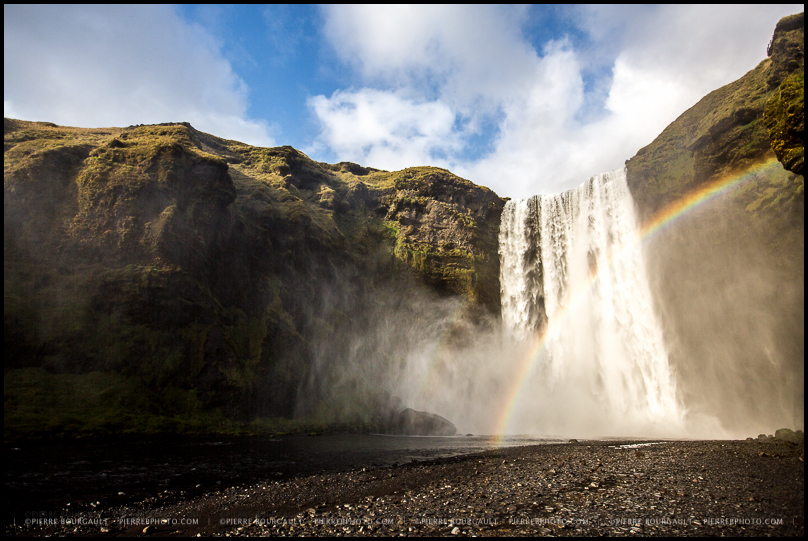 Now we are getting into more traditional looking falls.  Skógafoss is actually not too far from Seljalandsfoss.  I had to wait a while to get this shot as there were a few people right down in the front taking images.  Patience pays as the rainbow appeared!  There is a path to the side of the falls where you can climb up to the top.  The view is nice, but the images are more interesting from down below.  I have a second image in black and white that I really like as well from here. 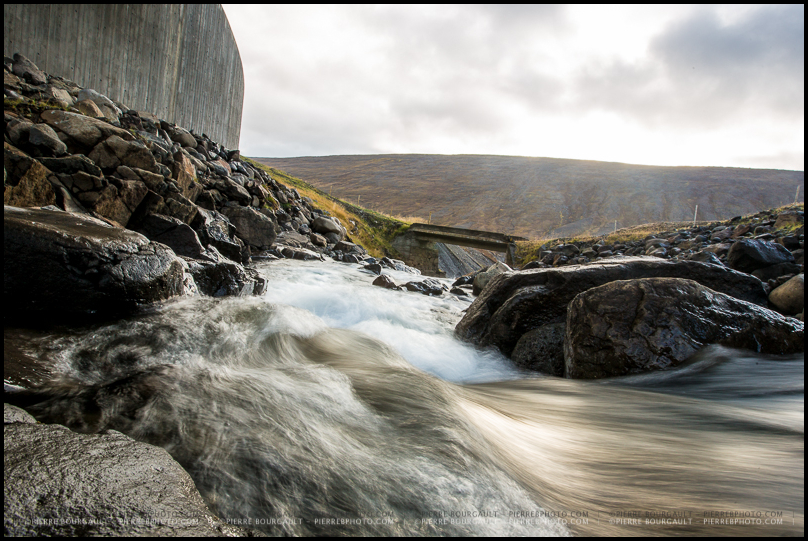 Ok, I swear there was a waterfall behind me for this one.  Another little creak style waterfall.   We stopped the camper off the side of the road, and to get this image, I had to climb down some wet rocks, under a bridge, and lay my camera down right up to the water.  I loved how the water swooped around, with the old style bridge in the background.  Another little random find while driving. 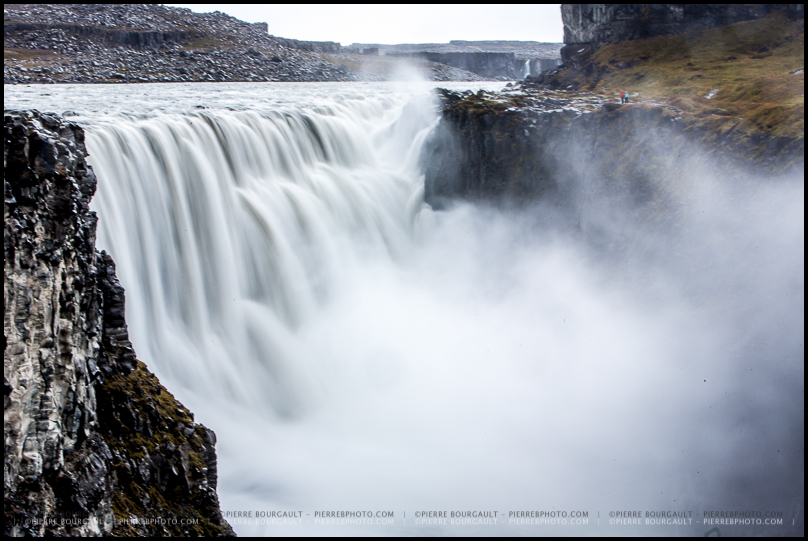 One of the most powerful waterfalls in Iceland, Dettifoss is in the north east of the country, pretty much in the middle of no where.  A quick hike down some rocky paths led us to the falls.  It was raining, it was grey, so the photos weren’t as inspiring.  We had spotted people on the other side of the falls and thought about going there, but our camper ended up catching fire (true story! we lost 2 days of our trip, no gear or people harmed 🙂 ), so our trip here was cut short

Selfoss is another falls near by, about an hour’s hike away (there is also a town called Selfoss in the south west, so we were a bit confused).  We unfortunately didn’t have a chance to make it there, due to the already mentioned burning camper.   It was actually the secondary heater that runs over night that caught fire.  Extinguisher was used, heater needed to be replaced. 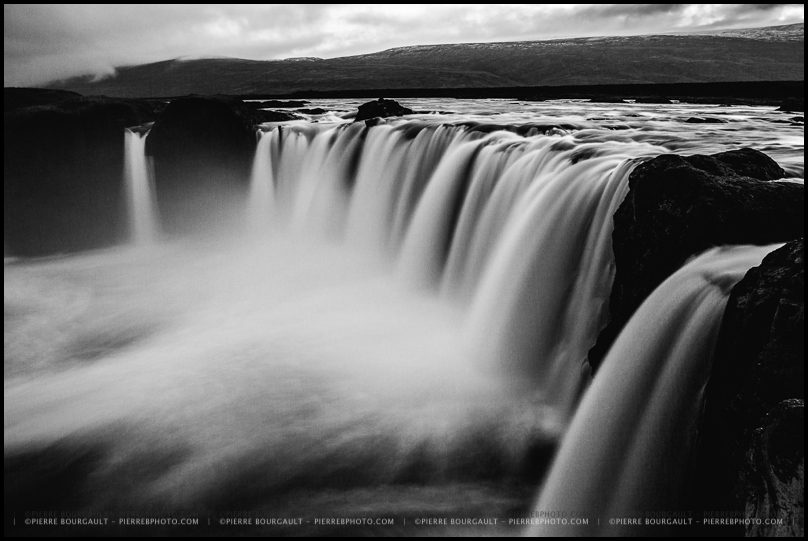 Translated to “Waterfall of the Gods”.   The waterfall plays an important role in the religious progression of Iceland.  When the country became Christian (around the year 1000), it is said that a icelandic lawspeaker, who made the decision to convert threw all the statues of the ancient norse gods into this waterfall.

My story for Goðafoss is a bit different.   Now that we didn’t have a camper heater, we had to make our way to a bigger city for an appointment the next day to get it fixed.  This meant 4 or so hours of driving, missing a bunch of spots we wanted to camp out at.  Stuff happens, you deal.  We drove by the sign for the waterfall in the dark, and decided to go check it out anyways.

There was some moonlight (it was maybe 8:00 pm or so), but not enough to hand hold a camera for a photo.  So we (stupidly) grabbed our tripods and walked with our flashlights over little streams and wet rocks right to the edge of the waterfall to get some images.  Even though we were a 8-9 feet from each other, we had to shout to talk.

The long exposure, coupled with the pretty stupid (but oh so worth it) trek to the edge of the falls at night, makes the above images one of my most memorable ones. 🙂 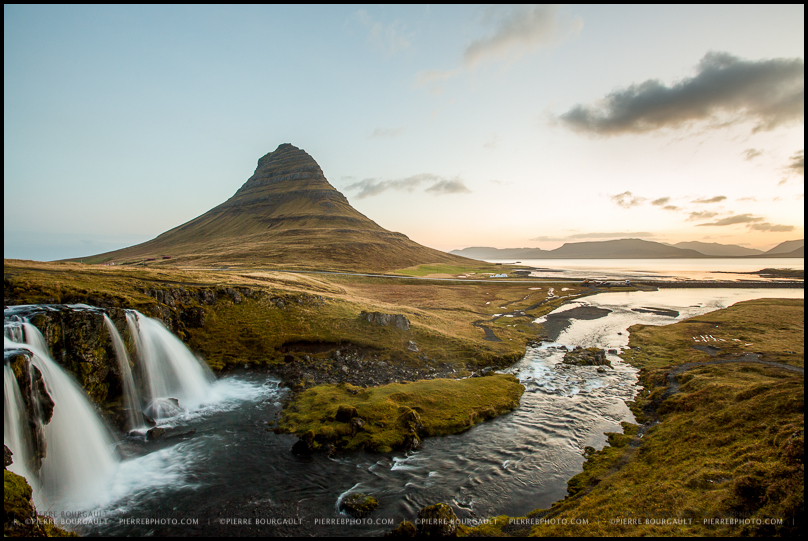 The waterfall isn’t huge.  And it’s actually 3 waterfalls side by side (harder to see for us as there was a pretty strong current) with another waterfall at a higher level.  The beauty of this area is seeing / feeling / hearing the falls with the Kirkjufell mountain in the back.  We camped near the edge of the stream for a night.  There was no sunset as the rain was pretty strong, but the morning was much nicer.  I  managed to climb down closer to the falls and get some really sweet up close images, and another pretty nice black and white.

So there you have the few waterfalls we had a chance to see and photograph!  So many more I would of loved to have seen: Svartifoss, Aldeyjarfoss, Barnafossar, Gjáin … but there are only so many you can cram in 2 weeks.

If you aren’t already, follow me on Facebook (or twitter if you prefer) as I’ll be doing a few more series of images like this.  Sunsets/sunrises, water/lakes, the roads, streets of Reykjavik … so many images, so little time.

And again, prints of every image are available!! 🙂  Just send me a message if you are interested