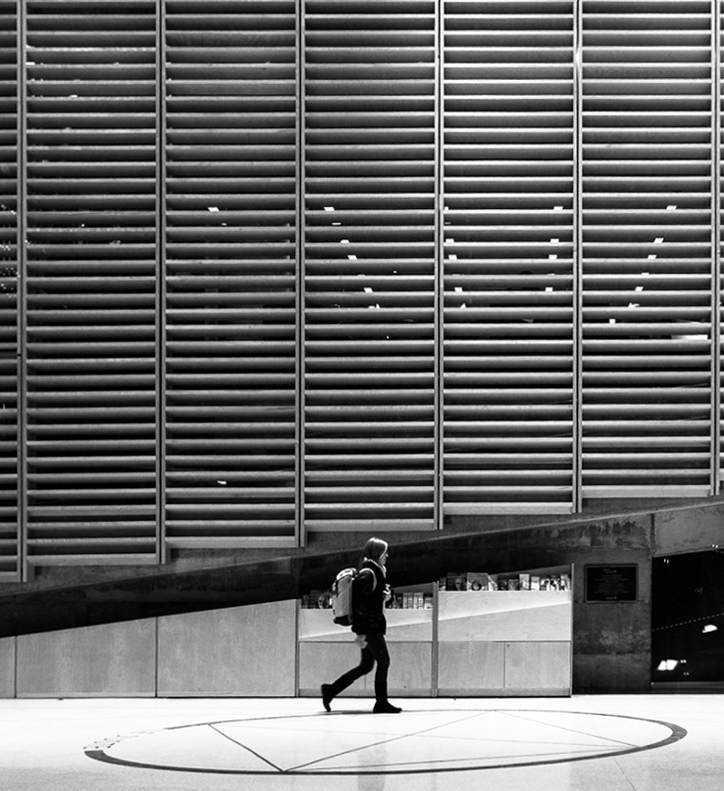 One of my favorite styles of photography is urban shots done at night.  And if I can add a human element in the shot, it makes that much more interesting and helps tell the story of the city.  Last week, I went on a night time photowalk with a friend through the freezing streets of Montreal.  Multiple clothing layers kept me warm (and thermal underwear too!) for the few hours we were out.  And the beer after the shoot kept me motivated haha.

The above image was one of my favorite from the night.  It was taken at La Grande Bibliothèque downtown.  While we aren’t allowed to go inside to shoot, I decided to take some shots from the outside.  While reflections through windows aren’t always what you strive to get, they can sometimes add some extra dimension to an image.

I decided to make a slightly different blog post and show you what I see and how I get to my final image.  You can sometimes capture an image as is in your camera and you have your shot.  Other times, you are limited in shooting angles and need to work your eye a little harder to get what you want.

Below kind of gives you the idea of where I was shooting from. 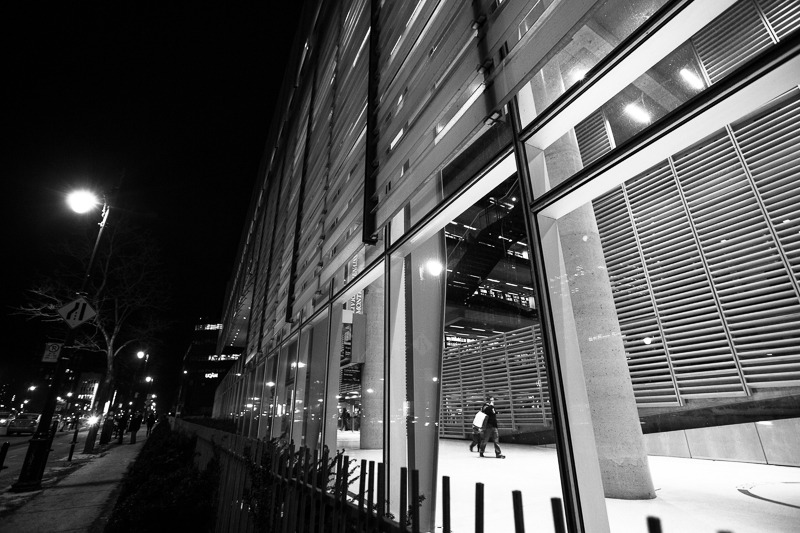 As my friend was busy playing with light streaks of the nearby bus station, I turned my attention to the actual library.  There are so many interesting lines and shapes in there, I need to find a way to convince them to let me in to shoot.  I swear, I could spend a full day working that place.  So this is what I saw from the sidewalk.  I like this image actually, gives a fun contrast from the inside to the outside (and again, with a human element in there).   I turned my attention to the right and that’s when my eye was drawn to the lines in the wall and the circle on the ground.   I climbed up on a snow bank to get as close as I could.  Here is the original image, straight from the camera 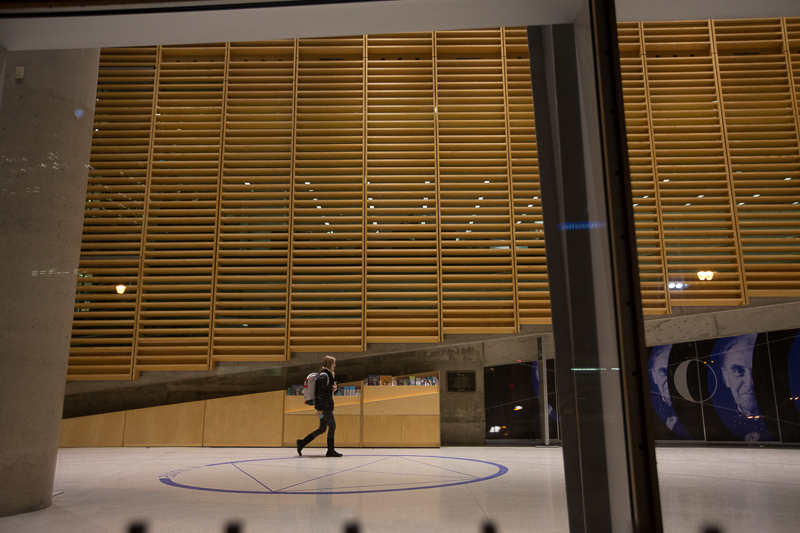 I also loved the faces on the lower right, but couldn’t use both of them in frame with the bit of window there.  I waited a few minutes for someone to walk by, and knowing that I wanted a square crop image, waited for her to be in the frame right in the middle.  Only took one shot, I prefer waiting for the right one than riffling off 10 shots.  A key element for me adding a person in the shot is getting them in mid-stride and thankfully, her mid-stride was well placed with the middle of my would be final image.

When I got home, this was the second or third image I started to process.  I do process most of my images.  I could probably spend more time processing them.  To get to the final version, I spent probably 6-7 minutes on this one tweaking things.  First thing I did was work the crop to get things how I wanted.  Starting with a square crop, I worked the size to try and minimize the side column and window frame to get it just right, all the while keeping the woman centered. 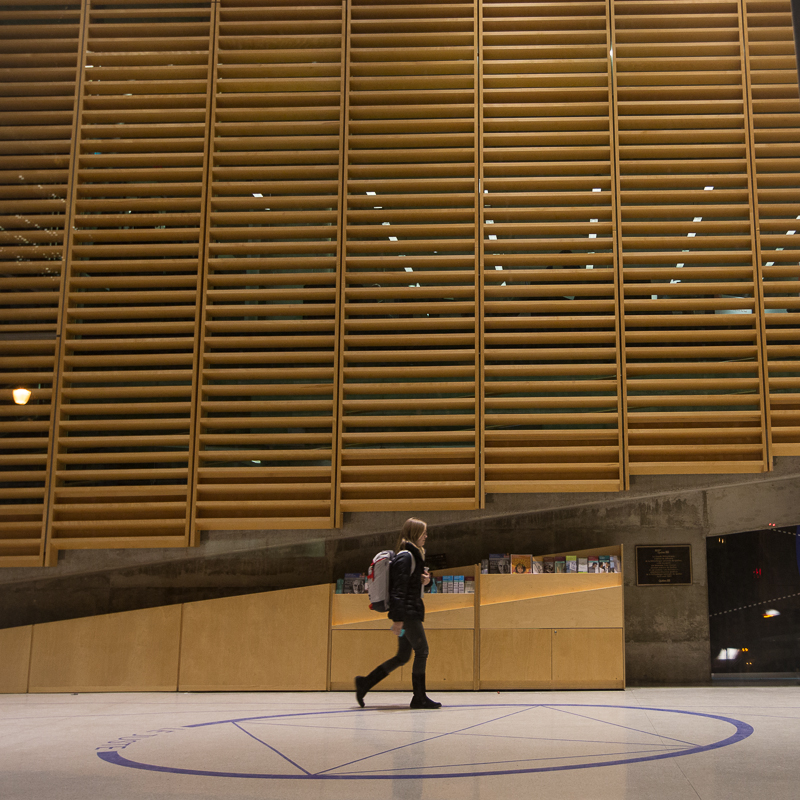 And then came working with the colours.  Those who have seen my urban shots know that I just love black and white.  I’ve been loving higher contrast as of late, specially for night images.  Actually working on a series of very high contrast images (more to come when the series takes shape).  From the second I spotted this image from the sidewalk, I knew that this was going to be a black and white.  Why?  The lines.  I feel that when the lines and shapes are the subject of your image, then colour can distract the eye while black and white somewhat focuses the eye on the lines.

I work mainly with Lightroom for most of my edits, so here is a screen capture of my settings for this one

I started by boosting the contrast and clarity sliders.  I don’t boost the contrast to the max, I prefer to use the tone sliders and the tone curve to tweak the whites and blacks to how I want them.  There is some trial and error in there until you get it just right.  No secret formula here, just working with what you got until you get what you like. 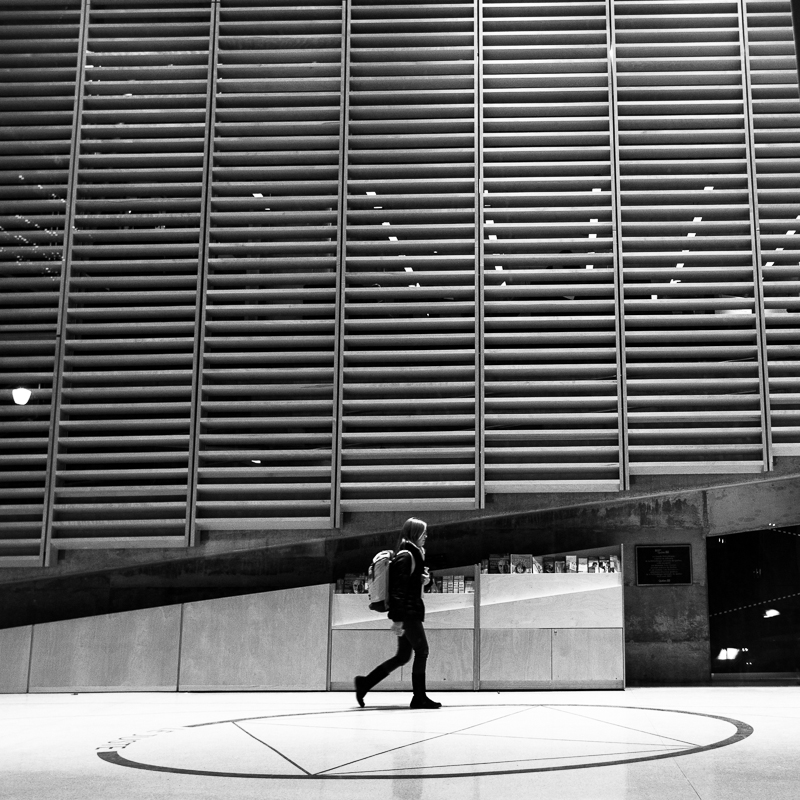 Was chatting with a photo friend out west who makes sublime images (check out his facebook page) and he mentioned line distortion.  So I reworked the image to give the final product, which I really like.  Here it is again for you lazy people who don’t like to scroll back up

So there you go… a little walk through as to how I go from seeing something to finishing it.  Photography is usually about making an image instead of taking an image and keeping things simple, limited processing, and working with something that attracts your eye is the way to go.

Hope you guys liked this style of post.  If you have questions or what not, feel free to post a comment or drop me a line.  I have more images to work through, never enough time in the day to do what you really love.  If you want to check out some of my friend Myriam’s photos from the walk, click here.  Be warned, my grizzly mug shows up a few times 😉 .