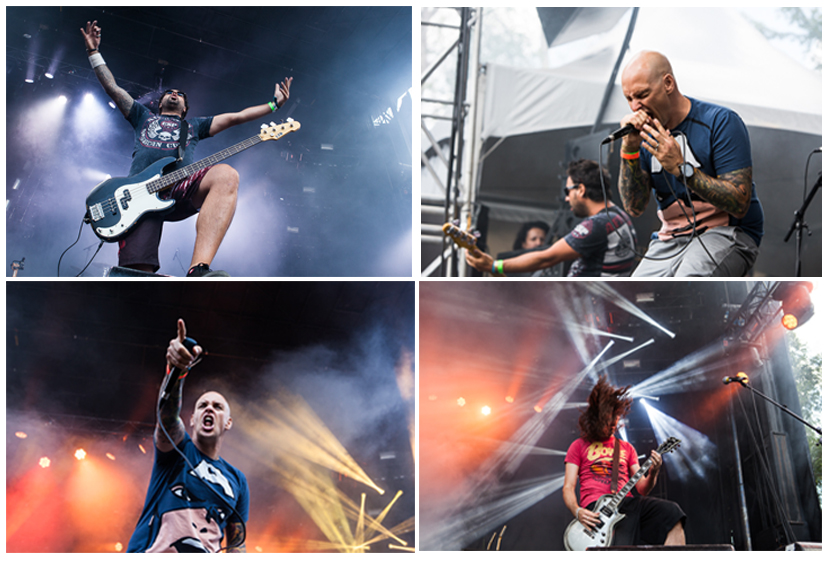 Let me start by stating that I’ve been a fan of Montreal’s Slaves on Dope since the mid to late 1990s.  Does that make a difference in the relevance of the rest of this blog entry?  Nope.  Just felt like saying that.  I’ve had the chance to shoot them a few times live and they are always fun to see…. and ever better to shoot!  They were playing at the Heavy MTL festival this past August, early on the second day and I made my way to the small stage to grab a few shots.

Now that the festival is long over, I decided to do something a little different for this blog entry.  Instead of just posting up my favorite images, though I’d write a bit about the why and how I chose my images.  I’m not a photographer who shoots 500 images in a 3 song set.  Some do.  I don’t.  Not only does it make it way more work to process and select after, I firmly believe in honing my craft and trying to pull out the best image possible each and every time I click.  Sure, sometimes I riffle a bunch of shots off.  But as a general rule, I keep my photos taken to the essential and prefer listening to the music, watching the band and getting ready for a moment, before it happens.

On to the images!  I’ll post up my fave image of each angle/set and then the other ones I took.  I’ll detail a little bit why I think my fave image is… well… my fave image!  It can sometimes be very subjective.  Personal taste and style.  If you really don’t care to read, well, scroll down and view the images.  I won’t hate you, really.

I hope this will give you a bit of insight into what I do, how I think… but also for those of you who are into shooting shows or want to learn, this might give you a few tips of things to look for when shooting and selecting.

Now really… on to the images!

Oh wait, I gotta give a thanks to the band for allowing me to post up the images.  While this is a more educational post, we usually need band approval before posting up images in portfolios from festivals like this.  Yes, this is a grey zone as it’s a blog, but hey, I rather get the yay than the nay.

Now really REALLY… on to the images!

1- First set… shooting from the middle looking left.  The first image is pretty standard without much emotion.  I know lead singer Jason Rockman can be really emotional in how he sings and I wasn’t getting that.  As I got a bit more emotion in the second image, bassist Sebastien Ducap creeped into the frame but the singer’s arm was covering part of his body.  So I got the third image where I zoomed in and you have some decent seperation between the singer and the bassist with the classic Rockman emotional scream 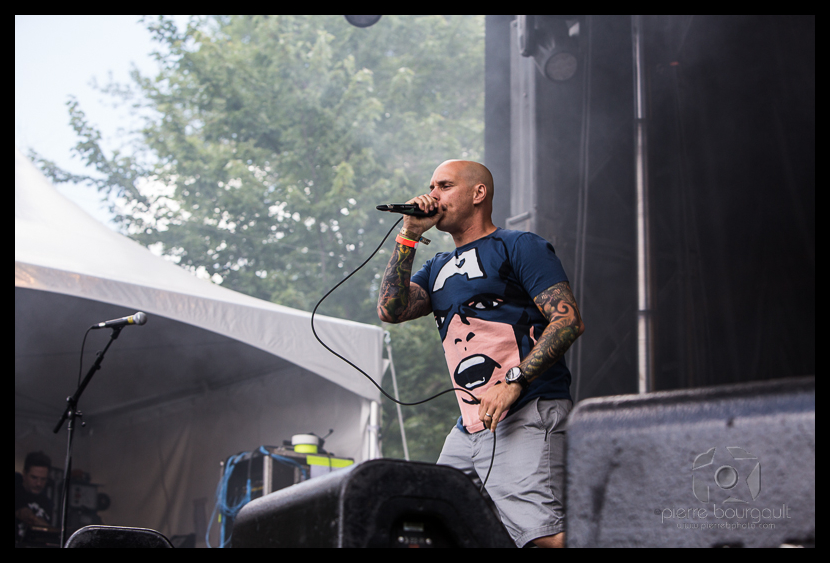 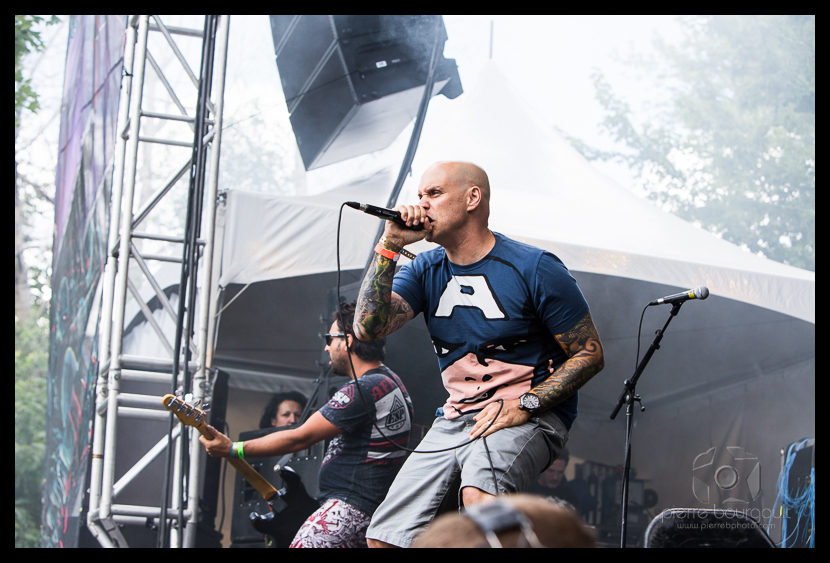 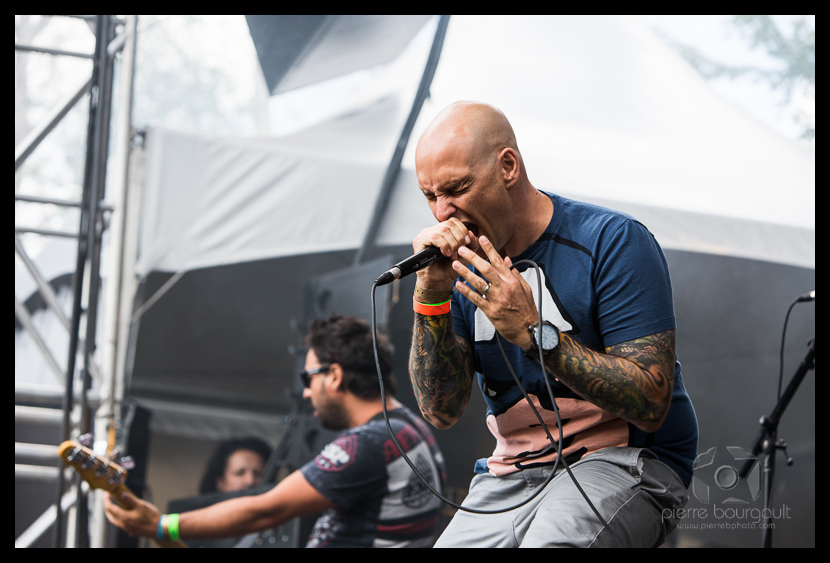 2- Staying in the middle of the photo pit, the singer came to the middle.  I always try and get a clear face, which can be hard with this singer as he sings with the mic really close to his mouth… which leads to many mic-mouth photos (where the mic covers the whole face) which is something I REALLY don’t like, but sometimes is necessary.  I am a fan of wider shots that show the whole stage.  And for a show that is on around 2pm in the afternoon, I was a bit shocked to see some cool stage lights.  So I waited for something a little more after taking the first image and managed to get Jason pointing at someone in the audience. 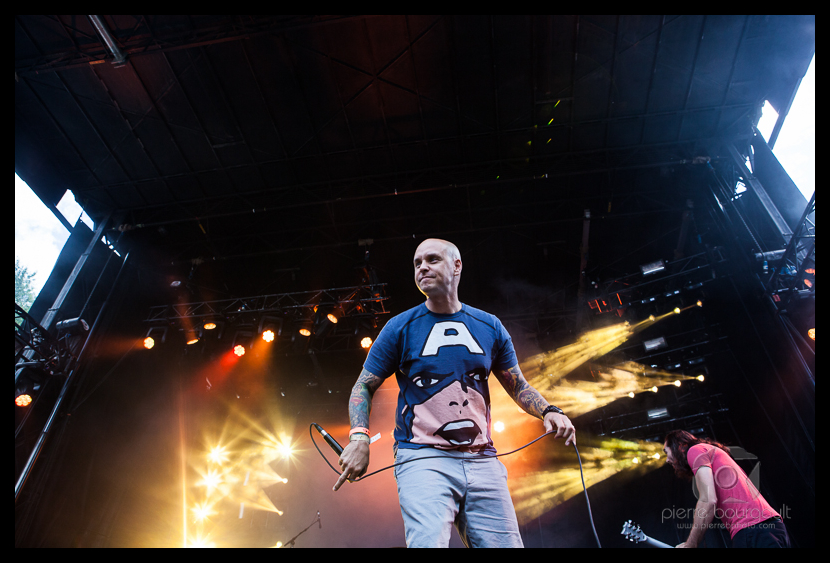 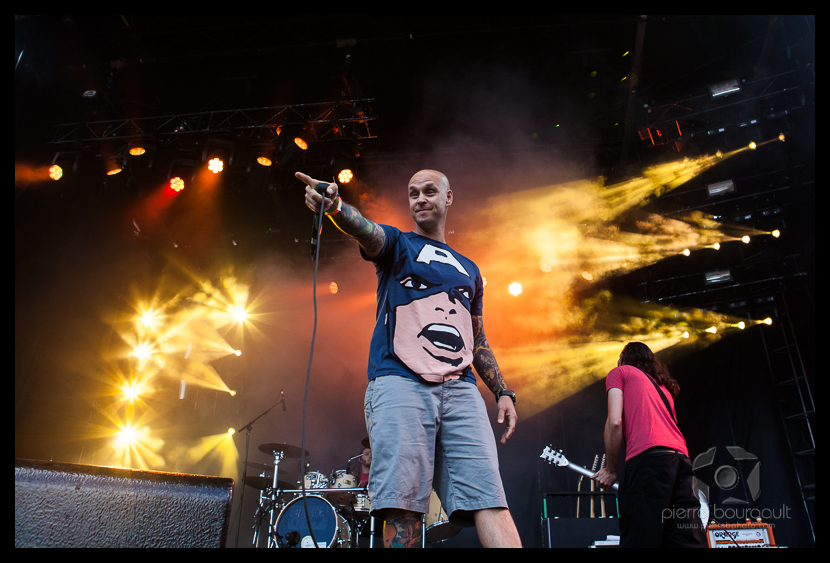 3- And now moving slightly to the left, I aimed at getting a vertical shot (I like to mix up my verticals and horizontals). The first few shots were ok, I kinda liked the tilt in the body in the first.  But for the chosen shot, guitarist Kevin Jardine moved a bit out to the side.  Again, aiming to get separation in the subjects, this makes the image a bit cleaner.  You can also see him rocking out, leg in the air and head back.  Jason’s left foot was slightly tilted (no, I didnt see this while shooting, but while choosing) which makes the image a bit more dynamic and adds motion into the image, showing (to me at least) that the singer is always in motion. 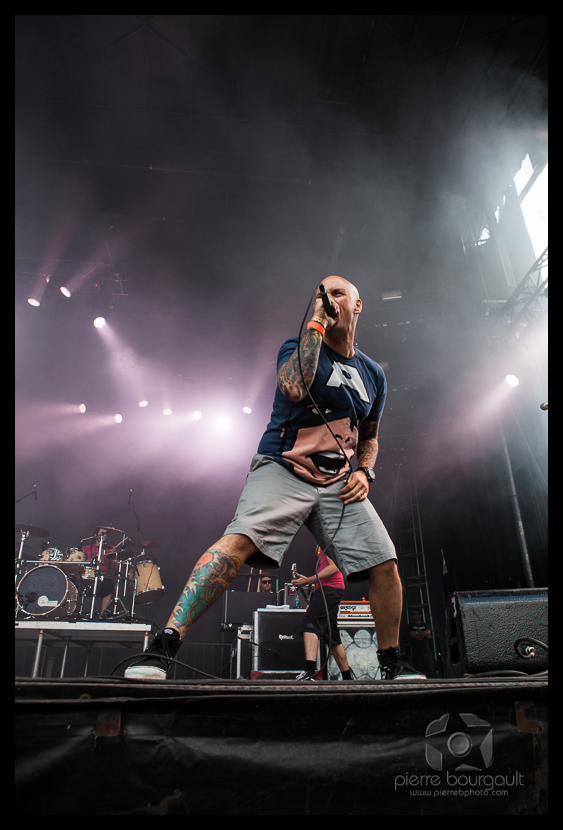 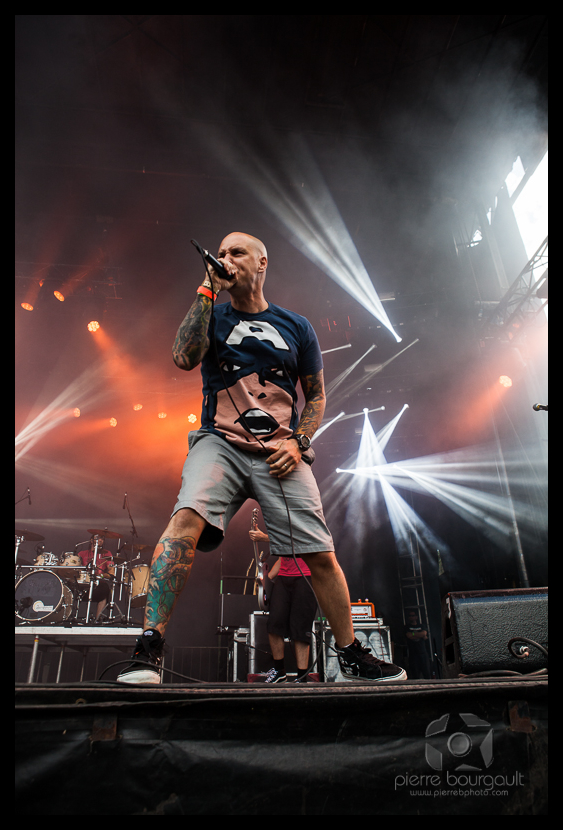 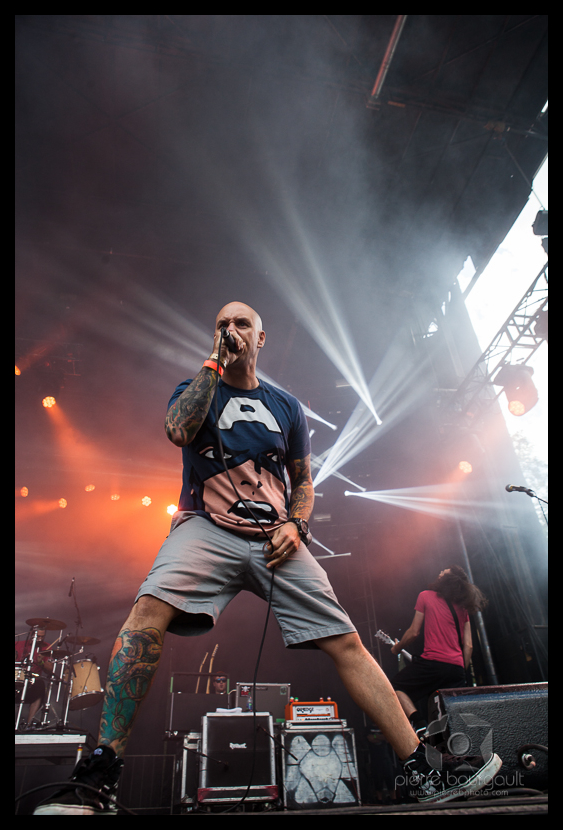 4- Alright, time to focus a bit on the other band members.  So I moved a bit to the right and starting getting shots of Kevin.  Trying to find a nice position where he is decently framed in the lights, and then waiting for the ever changing lights to be at the right spot, I started off with the first shot.  Again, a decent “in the moment” shot.  But a half a second later, his head moved up slightly and you can see a tad more face (ok, mostly nostrils, but still, I take what I can get).  I would of snapped another, but I believe he turned and moved away.  I cropped the final image a bit to get in a bit closer and remove the distracting bright sky in the upper right.  Basic photography, get rid of things that clutter the scene and remove from your subject.  Seeing as I can’t physically move the stage and didn’t have time to change lenses, my final choice was to crop. 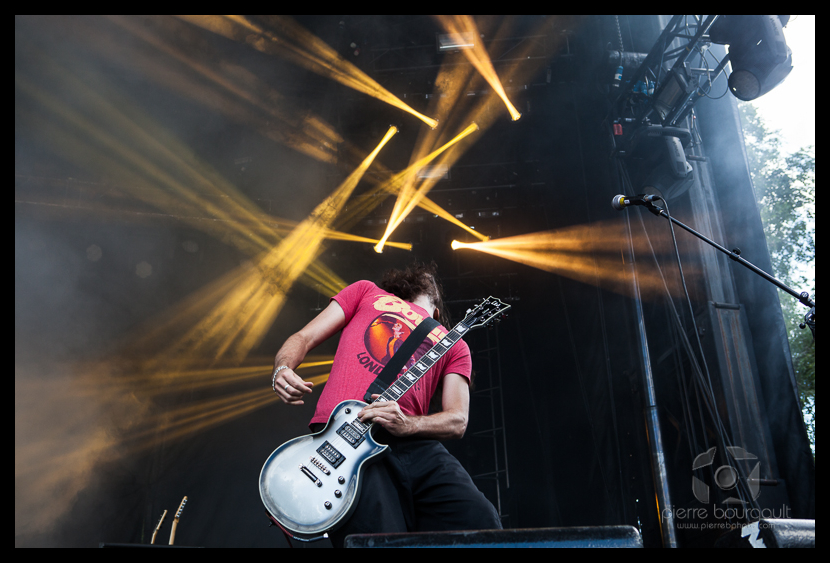 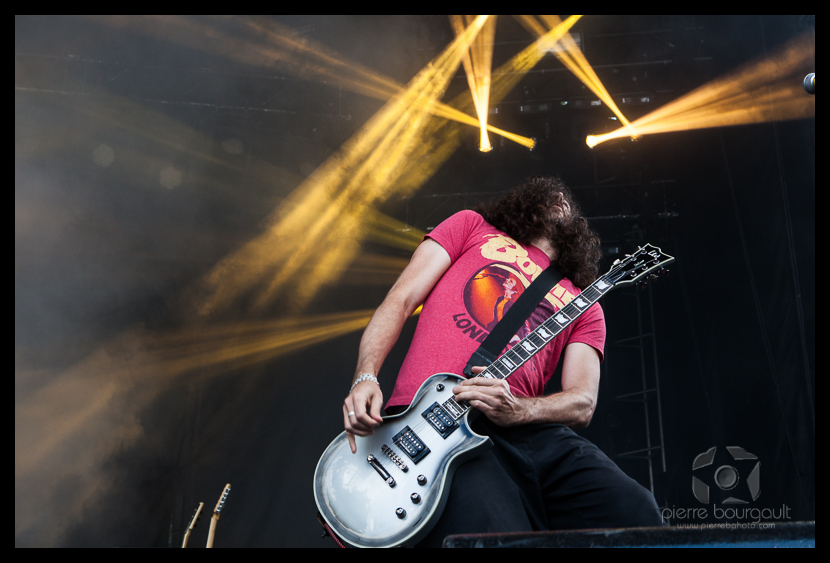 5- I was now set on moving back to the left of the stage to get more shots of the bass player.  But as I move across the pit, I am always watching for more stuff to shoot.  I’m only allowed there 3 songs, so have to keep my eyes peeled.  I noticed Jason almost right above me.  I could of shot from the front, but I’d mostly get a mic and eyes.  So I moved slightly to the left (his right) to try and get bits of mouth in the shot.  I honestly like both shots as they have some intensity to them.  But shooting for media means that you shouldn’t be giving in 4 shots of the same angle.  It’s my job to chose the best and I went with the second one as you see more of his mouth.   Same reason why you try and get a guitar player’s full guitar in the shot, or a drummer’s sticks, you should get the singer’s mouth as this is his instrument. 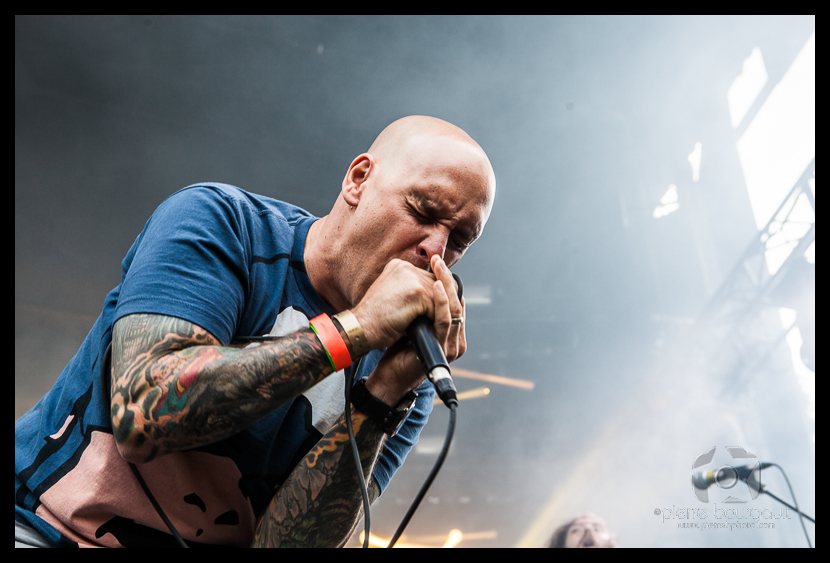 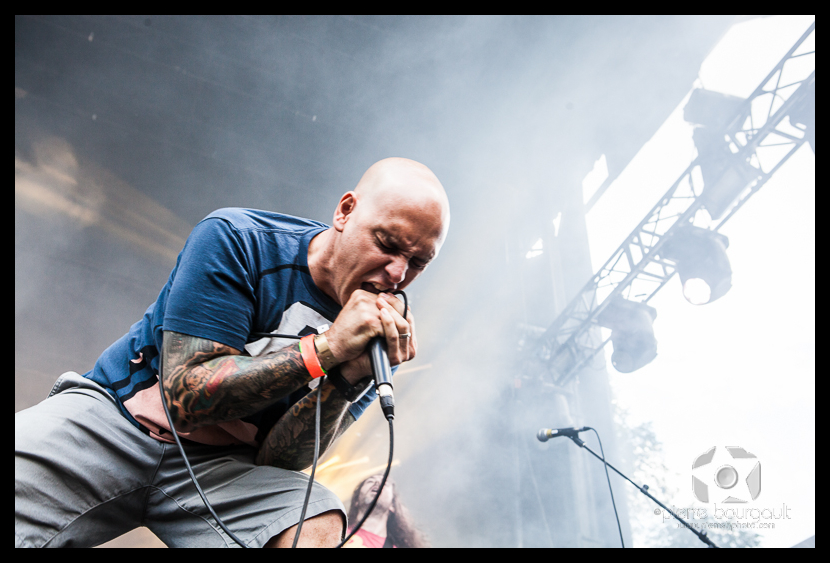 6- And  yeah, as I was right in front of the singer, time to nab a quick shoe shot.  haha.  Seriously, click the link, you’ll see what I mean :p 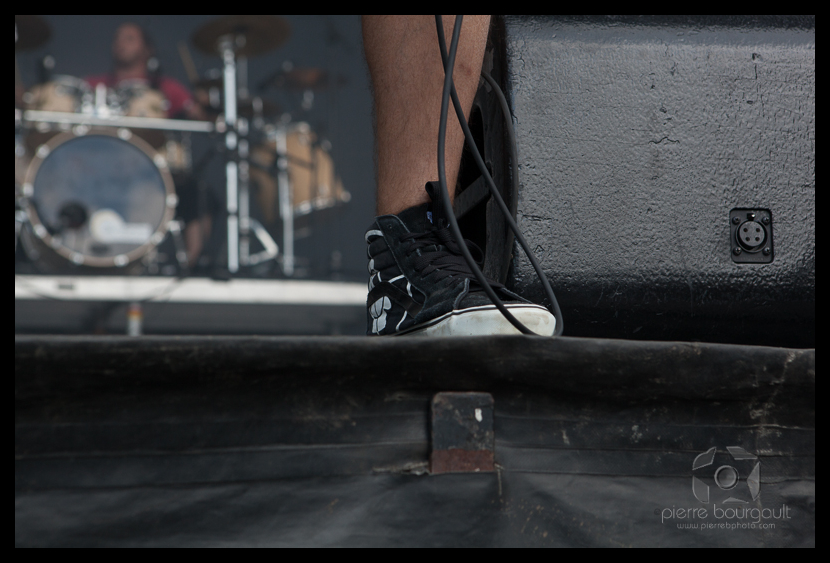 7- Now it’s back to Sebastien. I was pretty close to the stage and low, to give a sense of grandeur to the image.  First shot is pretty boring, he’s just standing there.  And then lookee that, he starts clapping his hands (gotta love crowd interaction!).  Then it was just about waiting for the right time to get the arms open and not closed.  There is a saying that if you see it in your viewfinder, you missed the shot.  You have to plan a half a second ahead to get the shot you want. 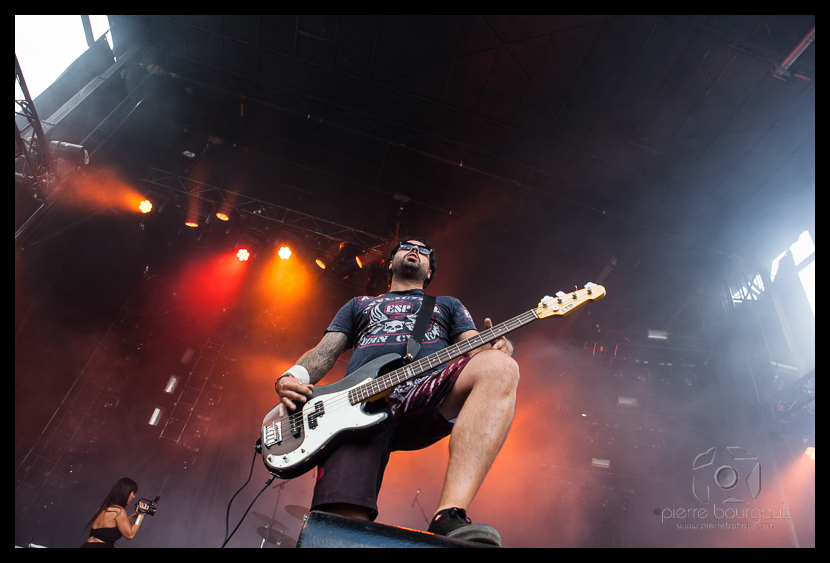 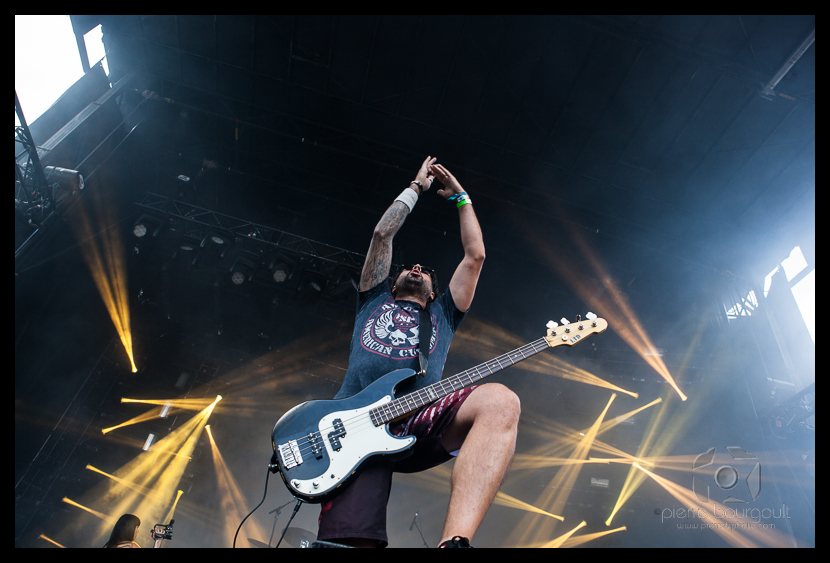 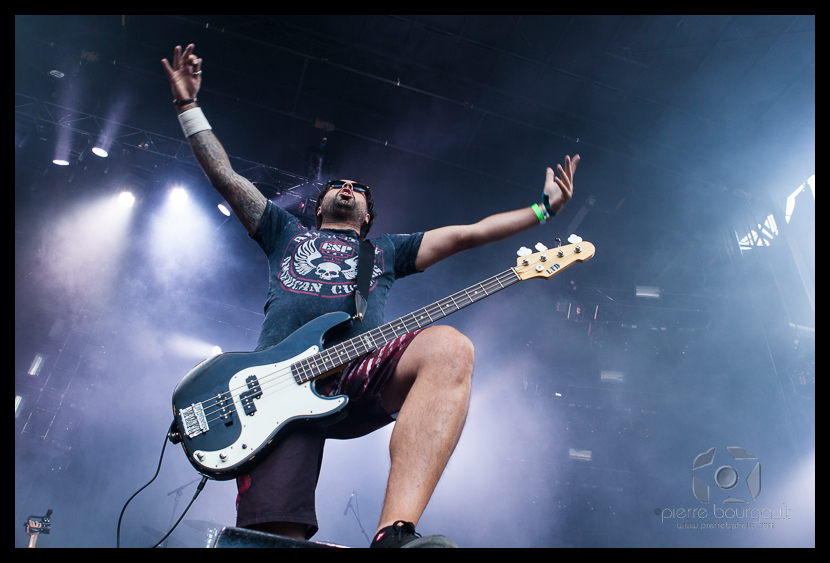 8- Back to the middle!  There goes the singer pointing out again.  Fun shot, but again, just waiting a few extra seconds to see if something else will happen gets you something a bit different.  Did I mention I was seriously digging the lights?  They can turn a regular nice shot into something pretty cool with the mix of colours 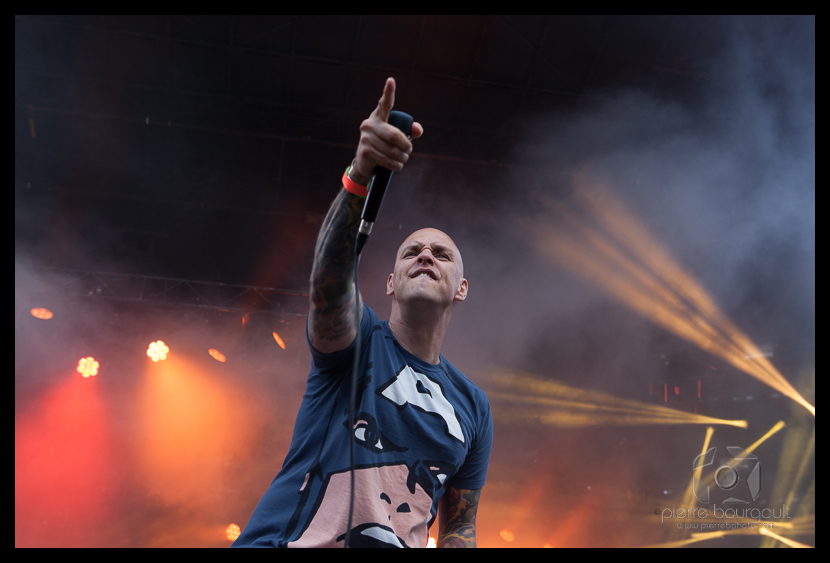 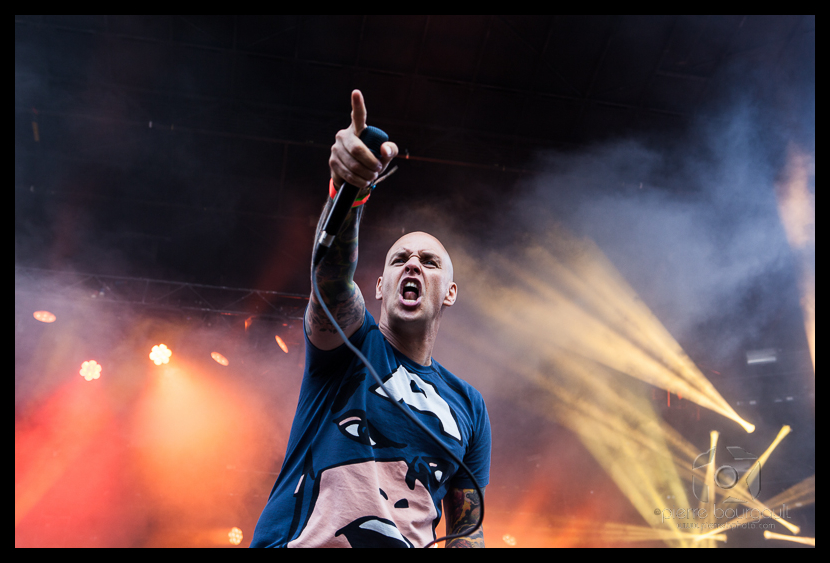 9- I always try and get many band members in the same frame, which can be a challenge with a band like this where the members are always in motion.  It’s usually easier from the middle… with a weeee bit of patience.  First image is a no.  You know when I mentioned mic-mouth?  Well there ya go.  That’s what it looks like.  And the other two members are pretty static.  Second image actually works more as we see Jason’s face.  But as Kevin moved off more to the side, I had to recompose quick.  I managed to get drummer Peter Tzaferis in the frame, sticks up between Jason’s legs and got a great pose from Sebastien as well.  Jason’s position, face and mic placement aren’t… well… ideal.  But hey, not as bad as the Beyonce superbowl shot, right? 🙂 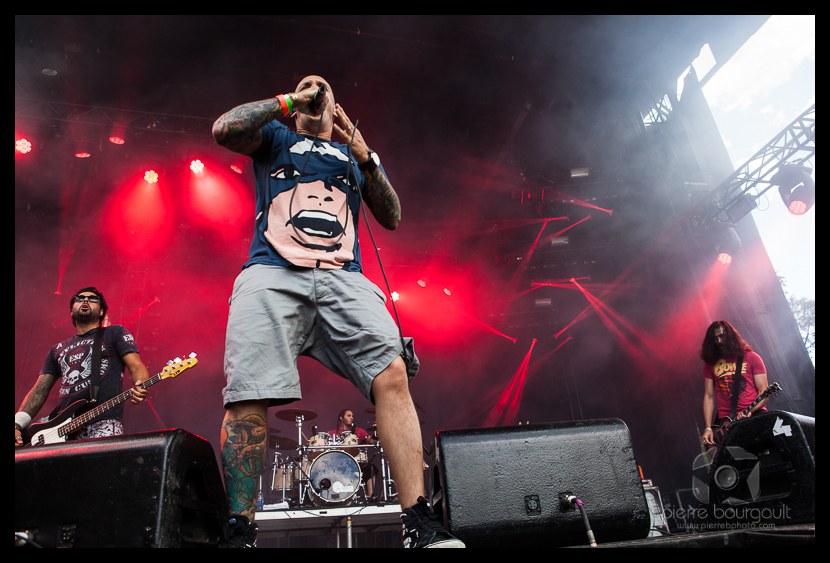 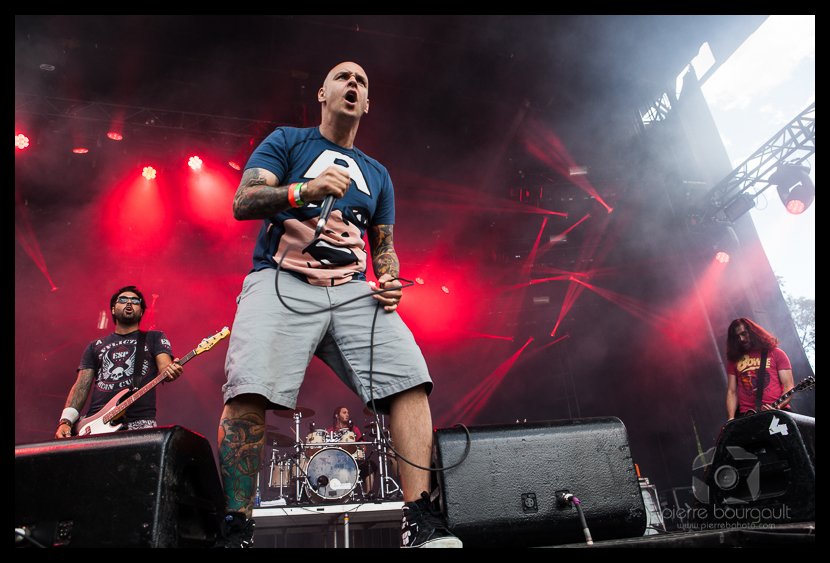 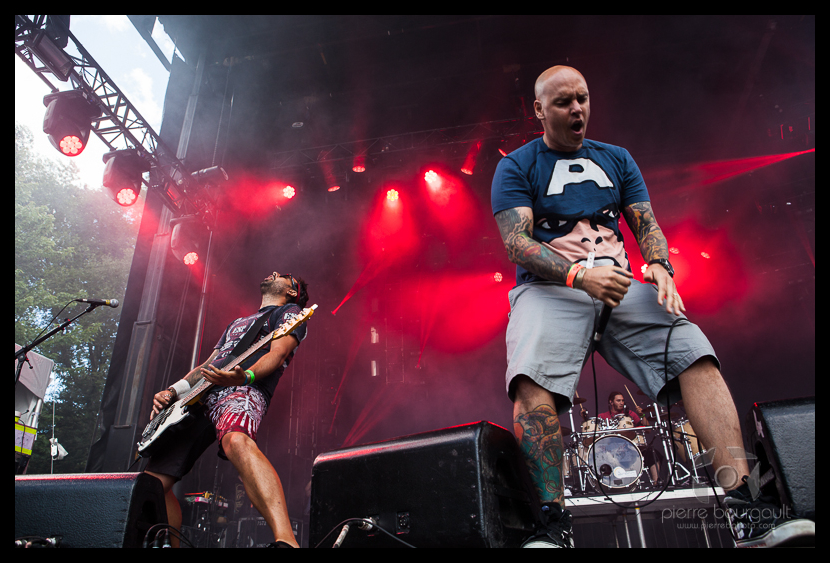 10- And for my last image (I have plenty more, but going to leave this post at 10) another band shot.  The first one is actually sweet.  Nice position by the singer, classic rock pose by the bassist and some crazy almost movement on guitar.  Sad I don’t see the drummer.  But wait, what’s that??  Lights?!?!?  Ok… let’s keep shooting.  The second image loses some in the singer and guitarist poses.  And then comes the last one… where we get some nice positions AND some cool lights!  CLICK! 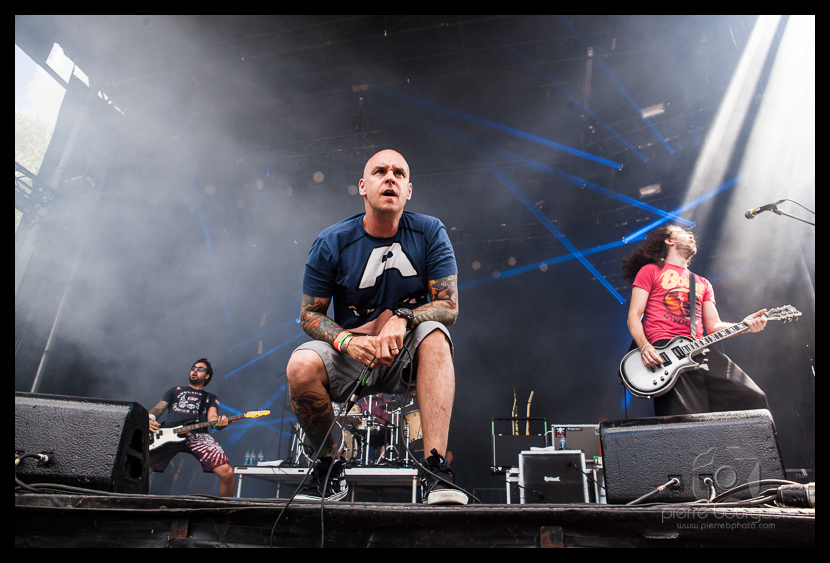 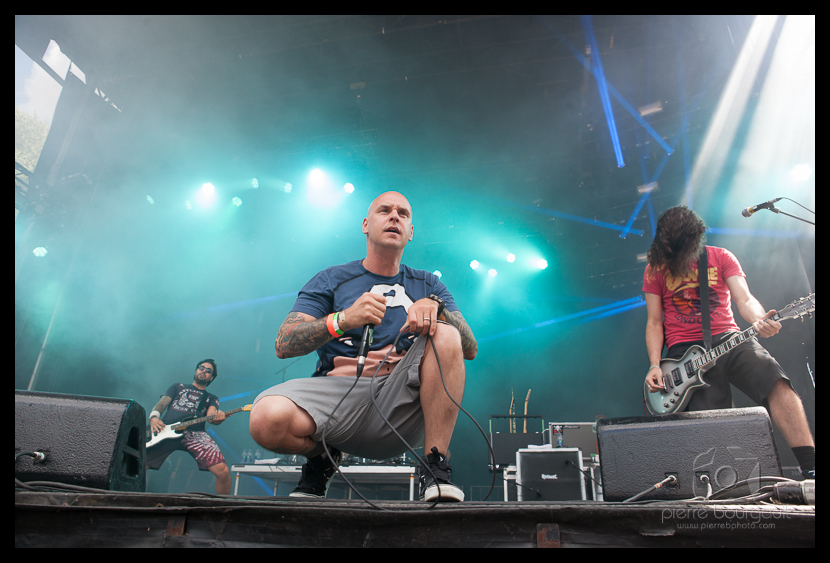 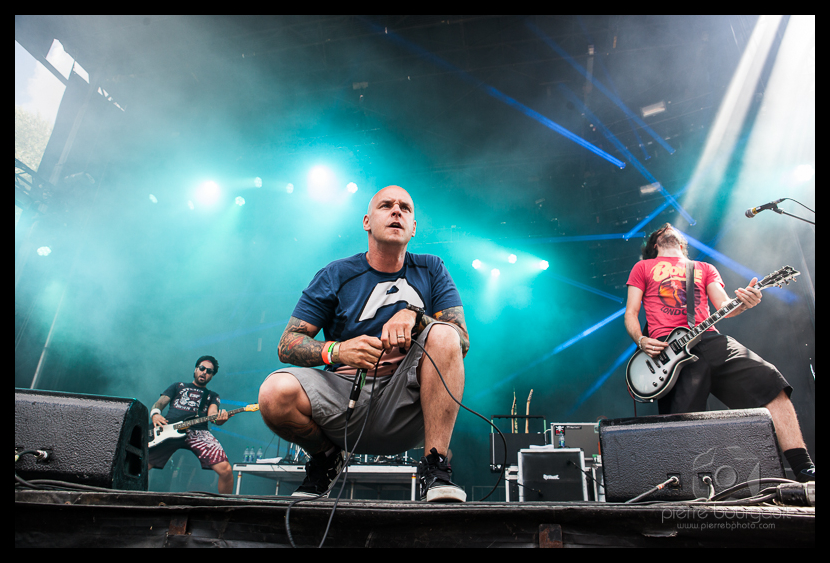 I was working for one of my fave medias, Cornershop Studios.  If you want to see their review of the 2 day festival, which includes all of my submitted images, click HERE for day 1 (Gwar, Sick of it All, Hellyeah, Newsted, Megadeth, Avenged Sevenfold,…) and click HERE for day 2 (Finntroll, Amon Amarth, Rob Zombie, Godsmack, Mastodon,…)

Hope you guys liked this detailing of how I work! I shot a total of 60 images during the Slaves on Dope set.  Actually, I shot 60-80 images during most of the shows during the festival.  Getting home and having 12 band’s to process and upload is tiring, specially when you are back out the next day.  So think while you shoot, be inspired by the music. 🙂

Oh, and here are a few extra images from the final set 🙂