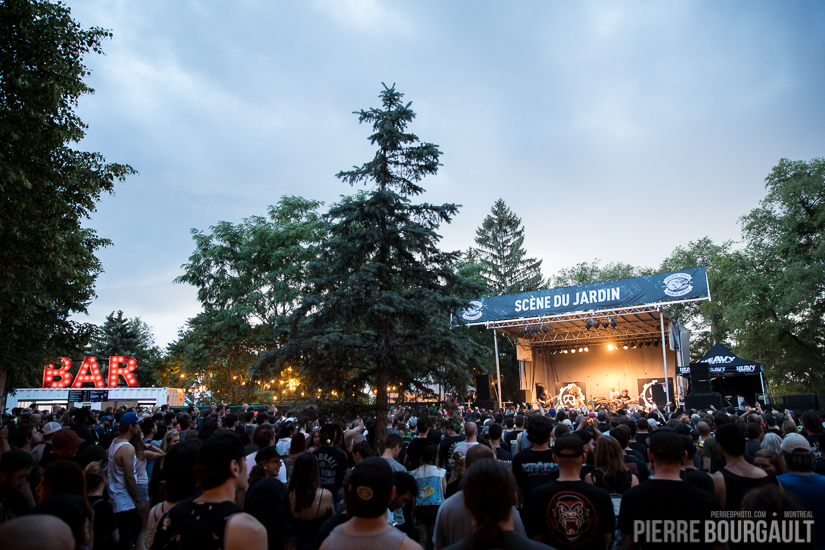 “How do you budget your time during festivals like this? It must be run, shoot, edit, repeat, all day.”

I had a friend (hey Eric!) who asked the above question on my Facebook following a post of my Heavy Montreal day 1 images, where I was asked to pull double stage duty as one photographer was seriously under the weather.  This is actually a quite common question I get from people (fans and photographers alike) about working at a festival providing some of the official photos.

Covering 2 stages is totally do-able.  It is often done when the stages have set times that follow each other.  But doing it with set times that aren’t planned to work off of each other?  C’est une autre paire de manches.

Like the majority of photographers working a festival (actually, the majority of all staff working festival, from tech crews to social media posters to caterers and so on) we all put in long hours and loads of effort to ensure the day goes as smoothly as possible and we get the work we need done. It is a hard job running from stage to stage with a bunch of camera gear under the hot sun in crowds of tens of thousands, having deadlines to meet, all keeping a smile on your face.  And yes, I was caught walking between stages in that torrential downpour on Saturday.  I got back to the trailer 100% soaked.  Camera gear was fine.  I also always bring an extra shirt and pair of socks. 🙂

Media photographers have a different (yet just as grueling) task of covering a big load of bands on various stages, sometimes they need to shoot a band at one end of the festival circuit and in 15 minutes have to cover another band at the other end.  Grueling I tell ya.

A festival photographer’s reality is usually covering one stage (or 2 stages in bigger festivals that are side by side / playing one after the other), but we need to live upload images, meaning images are often up before the band gets off stage. I’m a firm believer that selecting images (which actually starts when you take the image) and processing the image are an art form all on it’s own, and while there is a quick eye involved in the creative process, there are also tools available to help you get the job done faster.

A quick breakdown of my first day of Heavy Montreal 2018:

There were 26 bands on 4 stages. I was asked a few hours before doors opened to cover an extra stage. After looking at scheduling conflicts with the PR Manager, I asked a fellow photographer to fill in on the new stage for me for 2 bands as the times (usually 5 minutes apart) were just not feasible in my new work schedule, and those bands happen to fit nicely in his schedule where he had a good 30-45 mins before and after the bands.  Always a solution to every problem.

That left me with covering 46% of the bands that were playing that day. Added to that, I had to get some photos of Heavy Mania, the IWS wrestling event going on for most of the day, and some experience photos (crowds, people, installations and so on). Below is an approximate timeline of the day:

Preperation is HUGE when it comes to a workload like this. At 11:30am, I prepped my laptop and online folders. As minimal as it sounds, having all the folders (one per band) ready on my laptop and also created on the cloud is key. It is just simply that much less to do. Speaking to stage managers to keep me in the loop when bands are late, and if the band doesn’t mind me arriving past the 3 song limit (which thankfully didnt happen). Festivals are a huge undertaking, and a 2-3 minute backlog for an early band can add in to a 15-20 minutes backlog for a later band (which again thankfully didn’t happen).  I often had only 20 minutes between bands.

I timed a standard walk from one stage to another, added an extra minute to weave through fans if the stage was full. 6 minutes one way.

Knowing the schedule was hectic, I had to cut some of my Heavy Mania shooting time (still managed to process 6-8 shots of most matches) as I could cover more the following day.

And then 1pm… and the fun starts. It is constant looking at the time. It is knowing if I have enough solid content in my camera to make a good 12-15 image gallery of the band. That means sometimes I had to get that content in 1 song, maybe 2. If there was a good crowd, I went on stage and got shots of the crowd. If the crowd was smaller, I’d skip being on stage.

I usually have a waist pack with extra lenses I would change out. But with the schedule I had, I kept it to using only 2 cameras and 2 lenses for most of the day. A 70-200mm mounted on a Canon 5D4 and a 24-70mm mounted on a 1DX2. I kept the fisheye and ultra wide in my bag in the trailer. Minimising gear, minimising effort in a day I walked almost 20k steps.

Knowing what images I need to make a full gallery that both the promoter, bands and other media would like is important. Don’t overshoot, but shoot enough.  Mix of details, closer ups, full band shots… always in my style of emotional moments and story telling. Once I had that, I had to leave the stage and head to the trailer to upload/edit, knowing that I probably missed extra shots. But it is what it is.

My laptop is locked down in a production trailer behind one stage. I put my two cameras on the little piece of table I had to work on (no complaints here, I am invading production’s space), unload both cards into Photo Mechanic, and power through image selection. I tried to process right before I had a band on the F stage (where my laptop was) so then I could maximize my time editing. Keeping my eye on the clock, I usually got through the edits and exported on my hard drive into a “to be uploaded folder”. With 3-4 minutes to spare, I grabbed my gear and headed to the stage for another band.

Quick note about Photo Mechanic. I was told about this software my first official year covering Osheaga. It is a standard used by press photographers. It is used solely for image selection, and it greatly speeds up the process. I did a test run when I first got it to compare loading into PM, then Lightroom, then edit, then export VS loading into Lightroom, edit and upload. On an average set of 75 bands images where 12 are kept and editing, adding PM into my workflow brought my time down by 20%.  Huge.

One thing I love to do as well is create new folders IN CAMERA. So the newly shot images go into a new folder. This helps greatly with getting the images onto my laptop as I can grab all images in a single folder and dump them. No “skip duplicates” that can sometimes take extra time.

The rest is just getting the job done. On one hand, I am stoked that the promoter has enough faith in me to give me the extra workload, knowing I’ll take the ball and run with it. I am also stoked that I have enough faith in myself to get it done as well. Someone told me in the morning “you know you have to do live uploads, right?”. Yep. I am honest enough to say if I can’t get something done. But it is amazing how in an already jam packed day, you can pretty much double your workload, and with the right support from the right people, and people believing in the “there is no I in team” philosophy, it is surprising what you can get done.

Below are some extra shots of day 1 only.  I averaged galleries of 15 images per band, would love to post them all, but you’d get bored for sure.