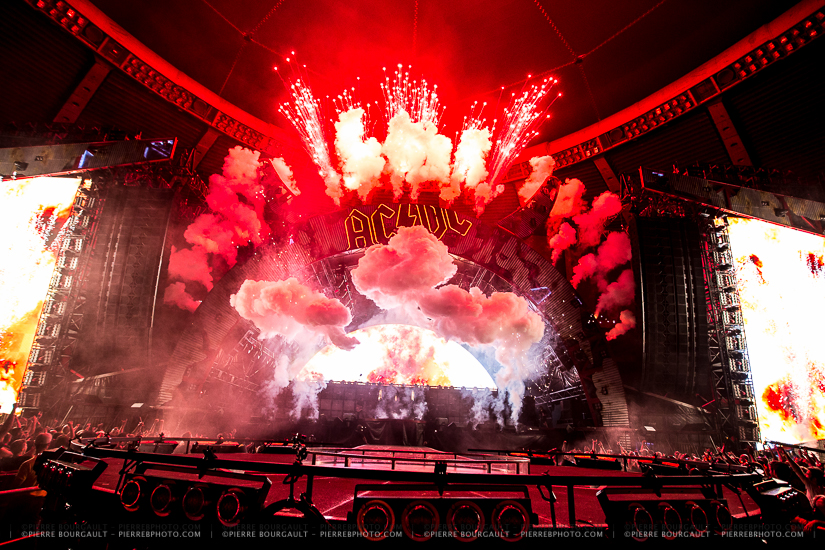 In the last month I have had the pleasure of photographing some of rock and roll’s legends.  Those pioneers who the younger folk today call old man’s music, but back in their day, they were setting a trend and influenced countless of musicians to come.  Some of them, at their “older” age (you are only as old as you feel), often times in the mid to late 60s, have way more energy than most other bands I see.  Some put on an amazing show (Alice Cooper, Iggy Pop,..) and some, well, should of retired a while ago (Motley Crue).  But last night was a rare bucket list shoot for me when AC/DC hit the Olympic Stadium here in Montreal.

The band formed back in the early 1970s, 3 years before I was even born.  And even with some lineup changes, they still put on an amazing show.  The stars of the night were singer Brian Johnson and the legendary Angus Young.  They ran from side to side of the huge stage and while Brian isn’t able to hit those high notes as he used to, is still an amazing front man.  But Angus… wow… I don’t know how he does it.  The guitar solos, the energy and oh those facial expressions.

Photo notes for you show shooters:  the stage is bloody high.  I would say a good 10-12 feet.  It was actually lower than the previous show in Quebec city where it was 15-16 feet.  Pyro at the start, lots and I mean lots of light.  I dropped my ISO to 800 for the show and most times had a shutter of 1/500 – 1/1000 at f/3.2.  There is loads of white light, to the point where it was almost a wash, killing some contrast (that can be fixed later of course).  Angus and Brian move a lot, so no matter which side you chose, you will end up with some good shots.

The fans were ready, with those flashing devil horns on their heads.  40,000 in attendance and a good 40% with the horns… merch sales must be pretty good on the tour 😉 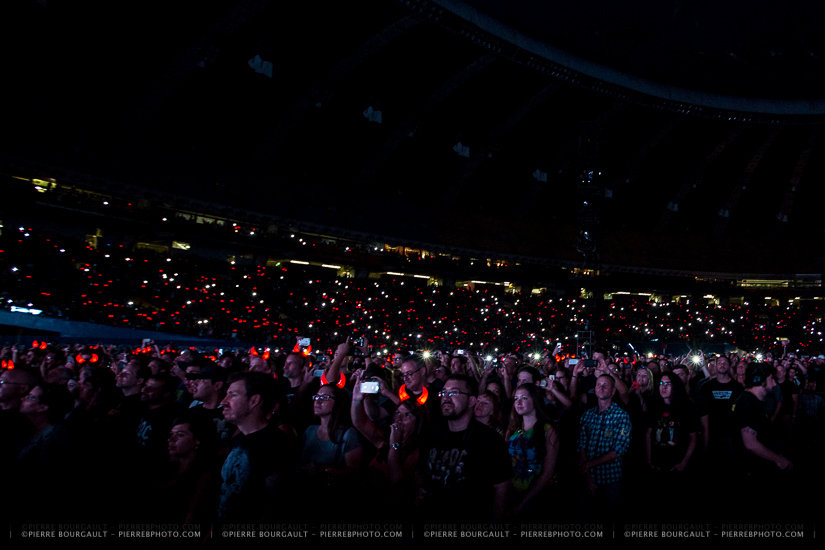 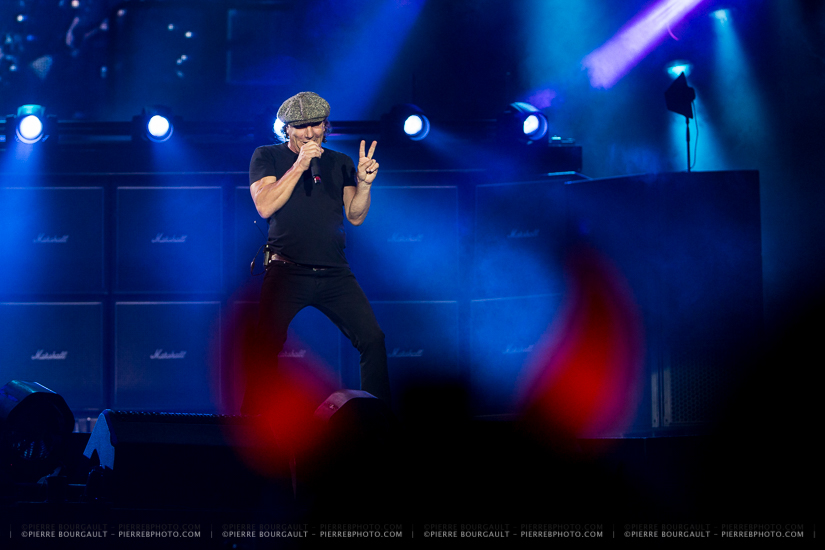 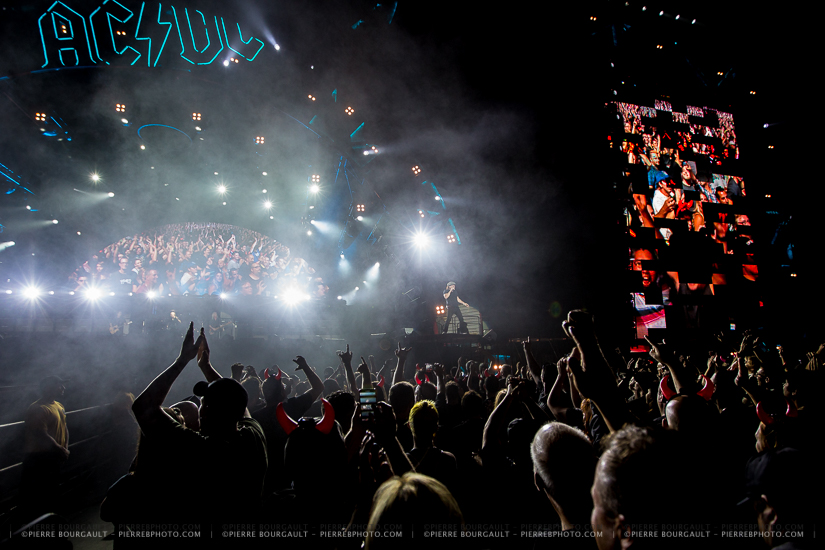 While it is always a treat to get images of some rock and roll hall of famers, I felt like a kid in a candy store with all the lights and visuals going on.  I really enjoyed the vast amounts of lights on stage and had some fun playing with the flares it can create in a lens. 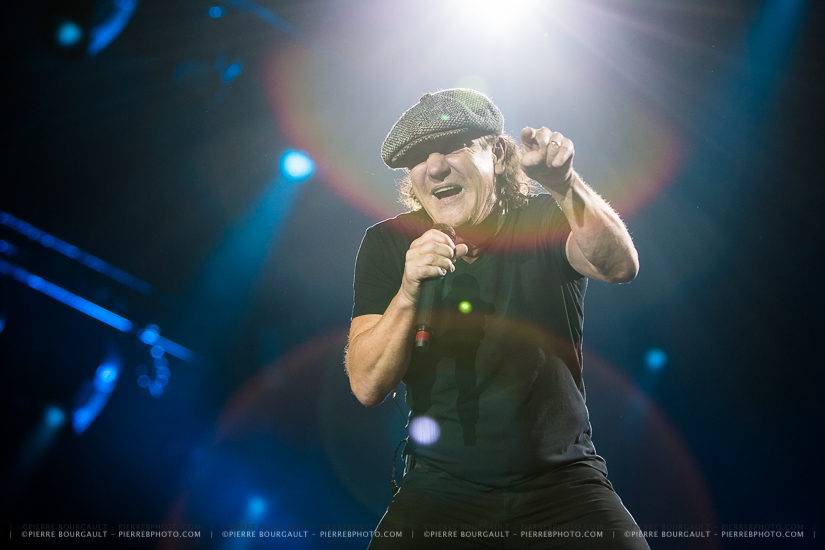 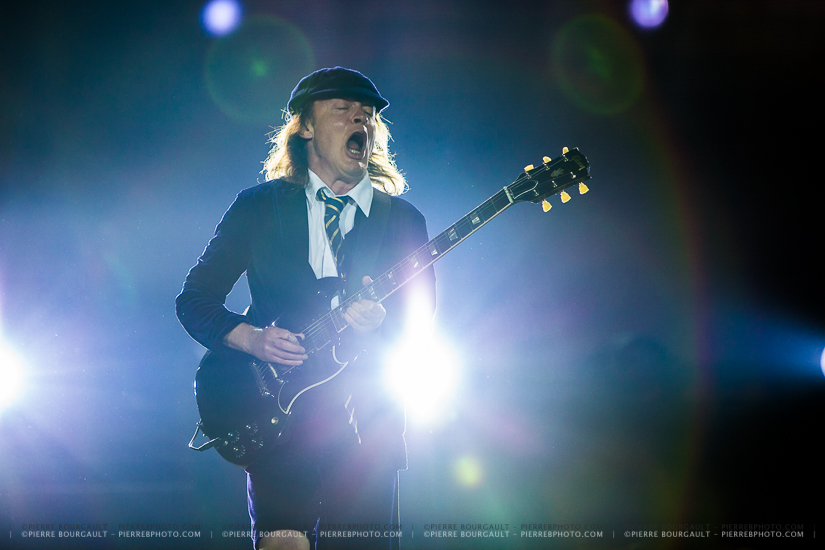 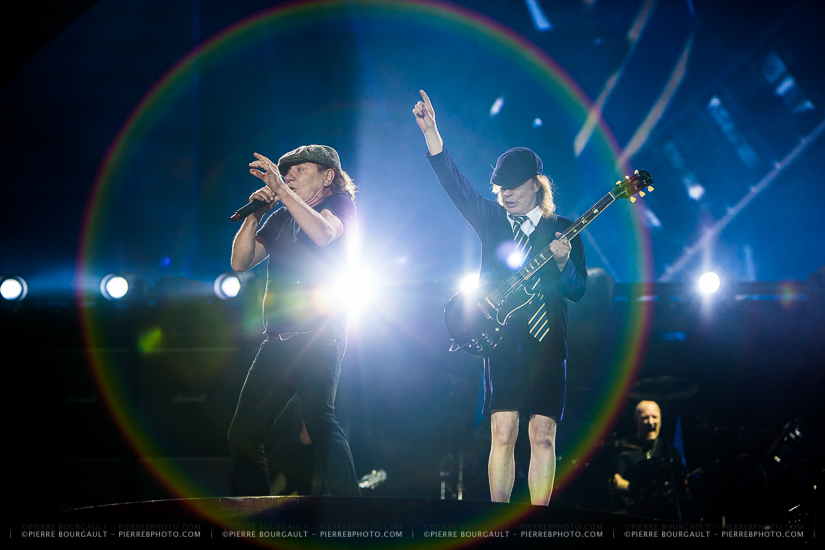 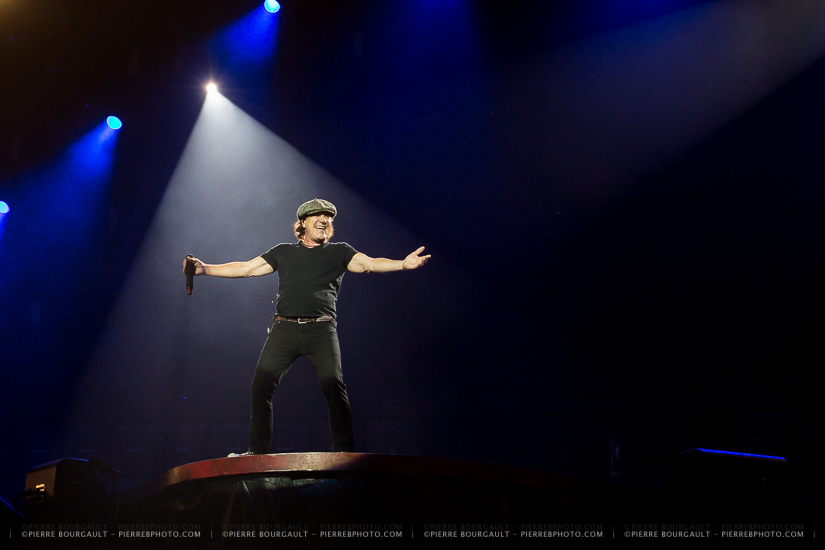 The bigger the show, the more it is rehearsed and the more it becomes predictable for a photographer.  Some classics moments captured, but sometimes, juuuuust sometimes, you get that one special moment with an artist… stepping away from the mass of photographers, they spot you and you take the shot. 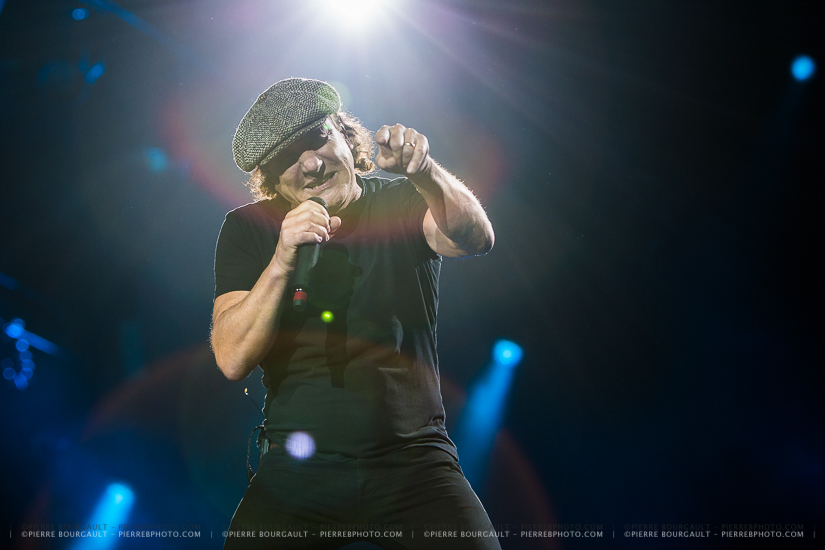 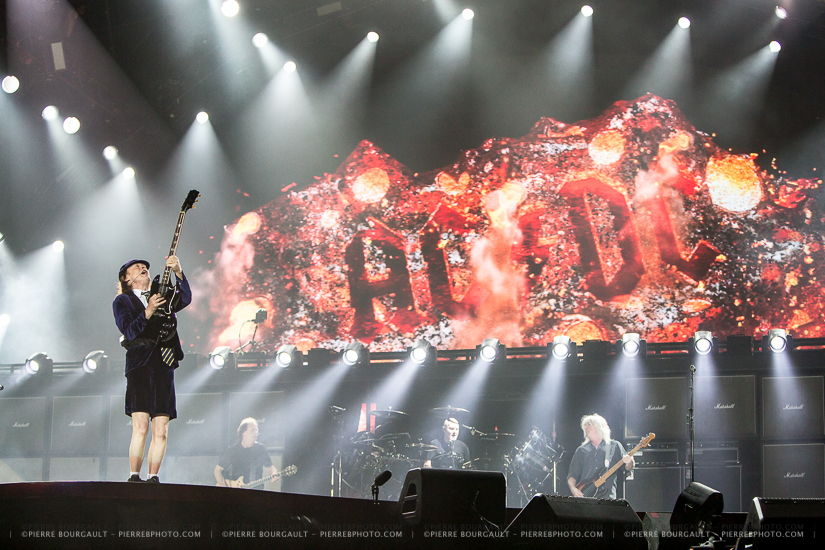 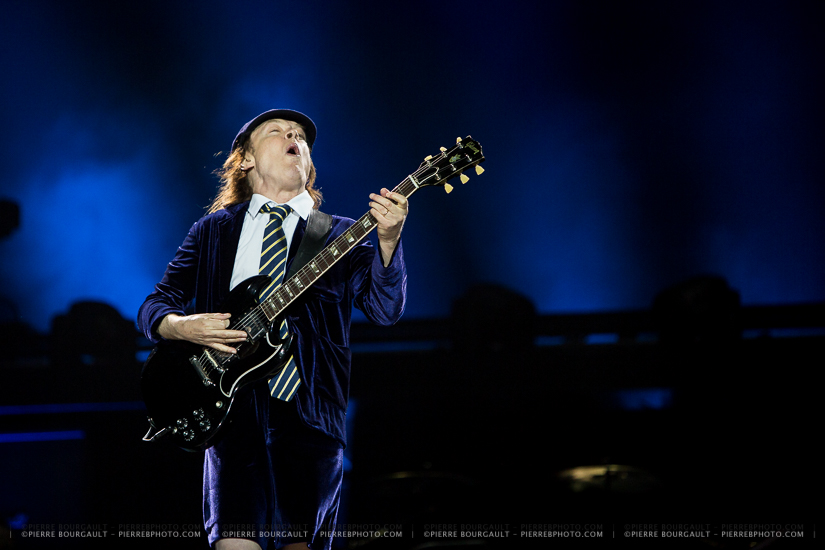 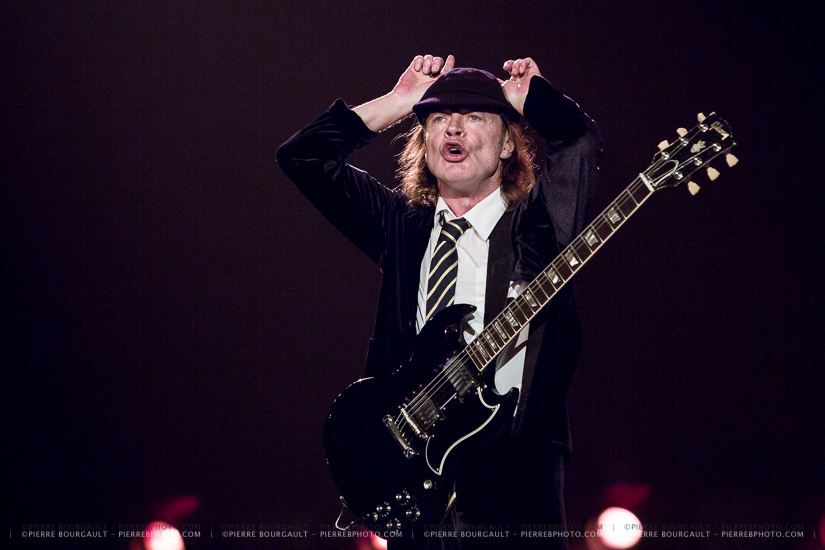 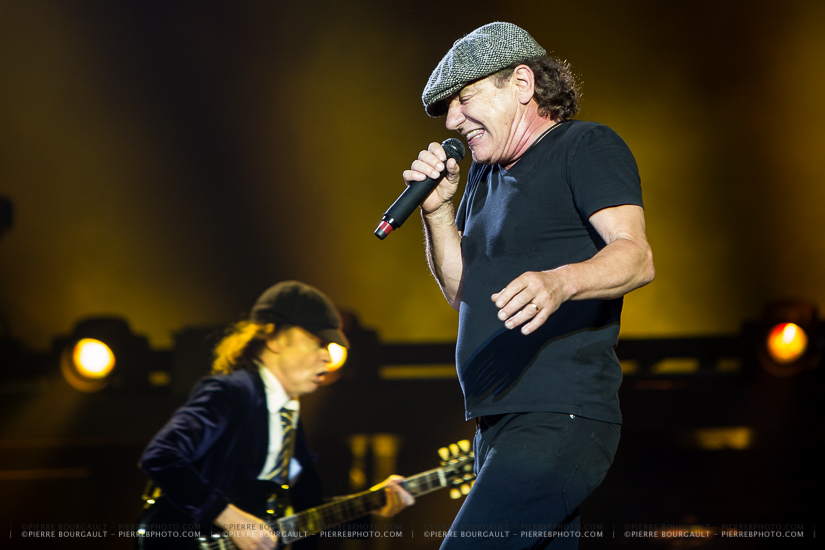 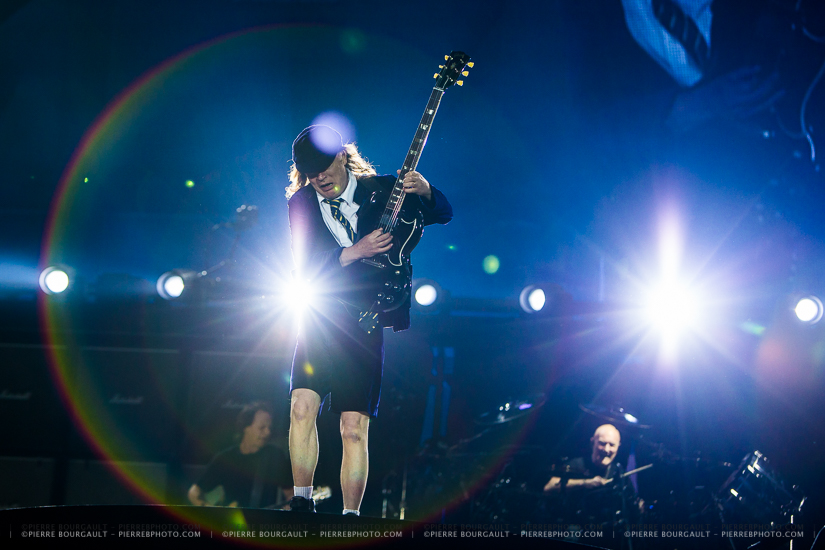 And then when you get home, even if you usually prefer colour images over black and whites, you find that one image that the second you see it, you know you are going to go the monochrome way. 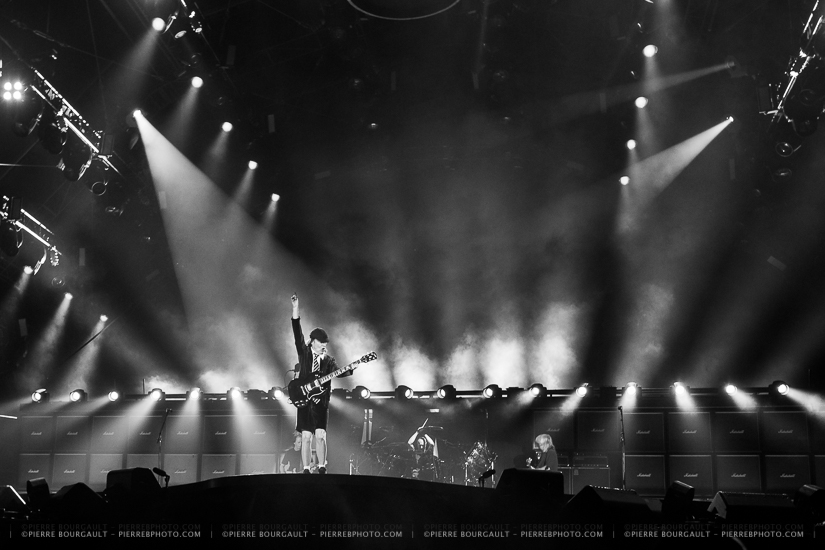 All images were taken for Montreal’s home of rock and roll, CHOM 977.  They have a bunch more images in their gallery, and you can even see the above black and white in colour 😉  .  I’m a firm believer that a media set should either be all colour or all black and white… but this is my blog and I can post as I wish 😉

AC/DC, thanks for the years of amazing music and still being able to rock… Montreal salutes you.