I was contacted earlier this year by Pemako Films to be part of a food photography/videography project for local company Freshmint, which produces high quality tasty food and delivers to your door (only available in the old port area).  The project ping ponged between short videos, photos, longer videos, behind the scenes photos, no video,… and finally settled on some food photography, some employee portraits and some behind the scenes of the owners and employees, capturing the team work they have (everyone pitches in to help).  They wanted to keep a really down to earth feel to the images, nothing too processed or studio like, with grain, gritty, real.

The shoot happened in June, so why has it taken so long to post images?  They wanted the images for their new website, so out of respect for what they were doing, I wanted to wait for the website to be up before posting them myself 🙂

We settled on a top down look, knowing that capturing behind the scenes of the dishes being done AND doing the food photos would be a big task, I brought along ultra trusty photographer Didier Kaade to be where I could not, and along with food stylist Emilie Gaillet, we set to making the images.

While we were totally ready with lights and reflectors (we were shooting in their actual kitchen/offices in the Old Port), I opted with going with natural light for the dishes from the huge window they had in a second room.  It added more the the “real” feel of the images.

Was a great project to work on, and I think best of all, I got to sample some pretty amazing dishes.  Still thinking about that grilled cheese sandwich.

**You need some food photography done?  Some images of your employees in action?  Hit me up, let’s chat 🙂 **

I used a mix of my Canon DSLR but also did many photos with my Fuji x100s.  As my DSLR was setup in the other room, taking it down to get some candid working shots wasn’t the best idea.  So I had my little fuji to do the BTS images.  I love the little camera.  Great images quality and when things aren’t moving too fast, the autofocus is always spot on. 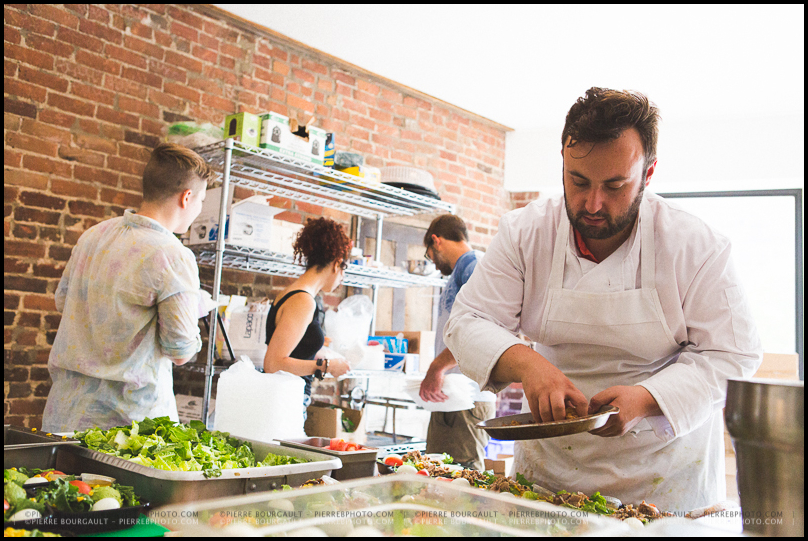 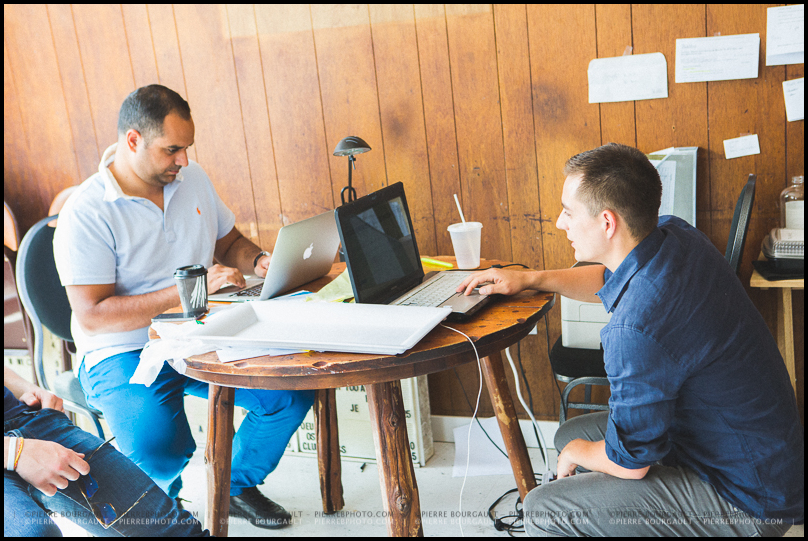 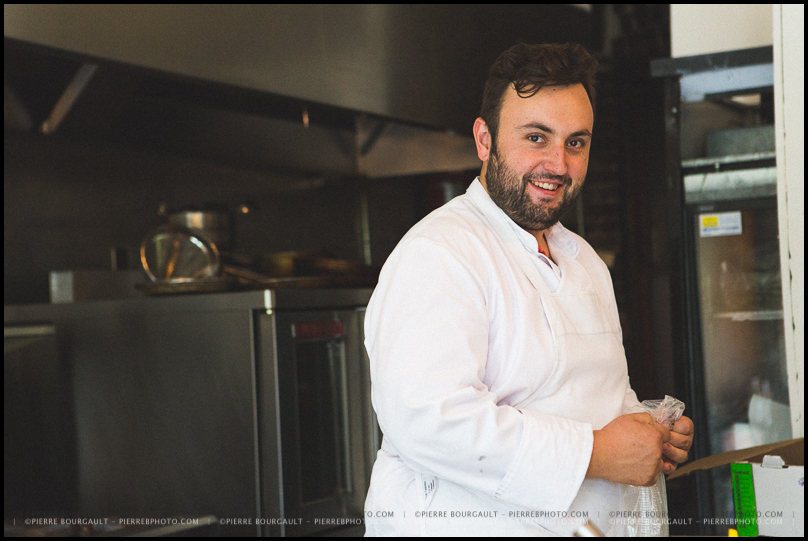 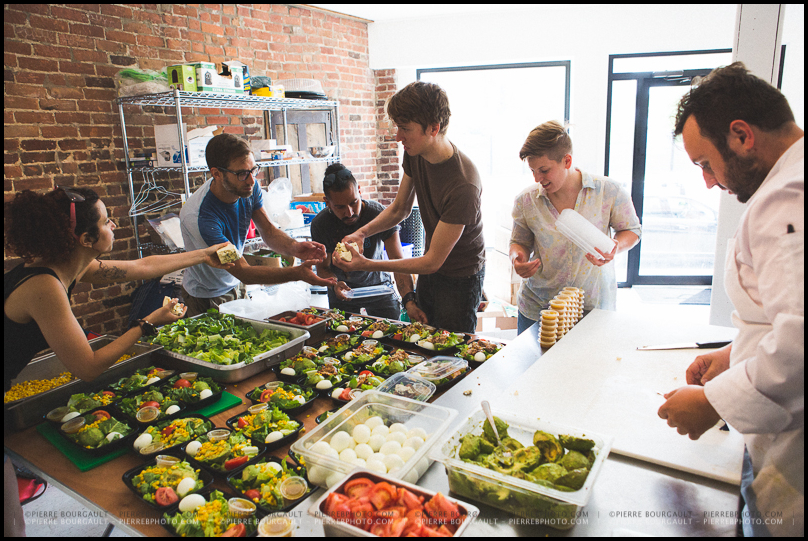 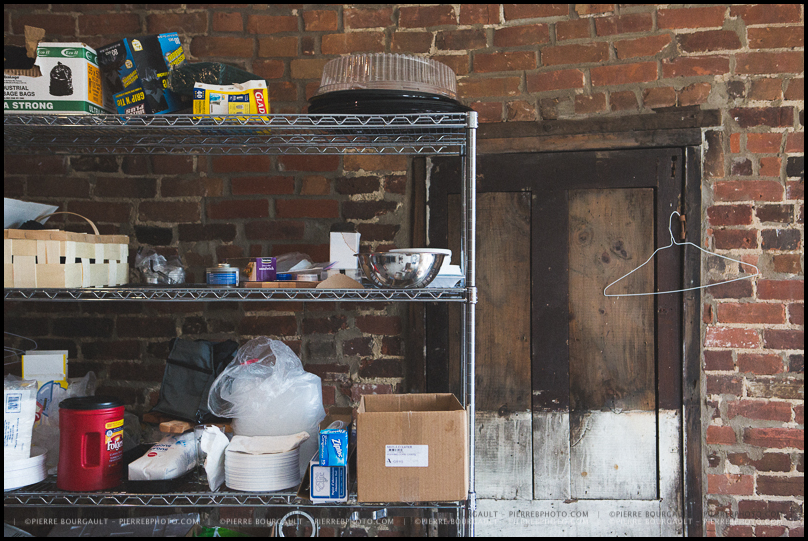 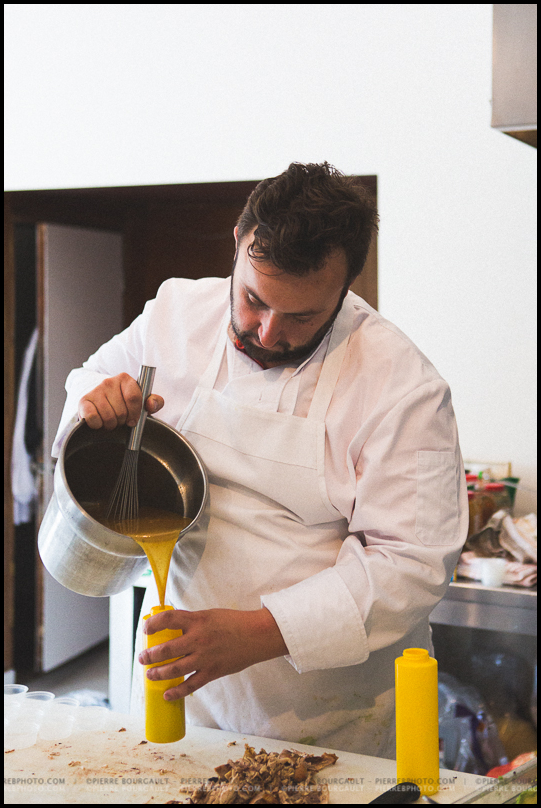 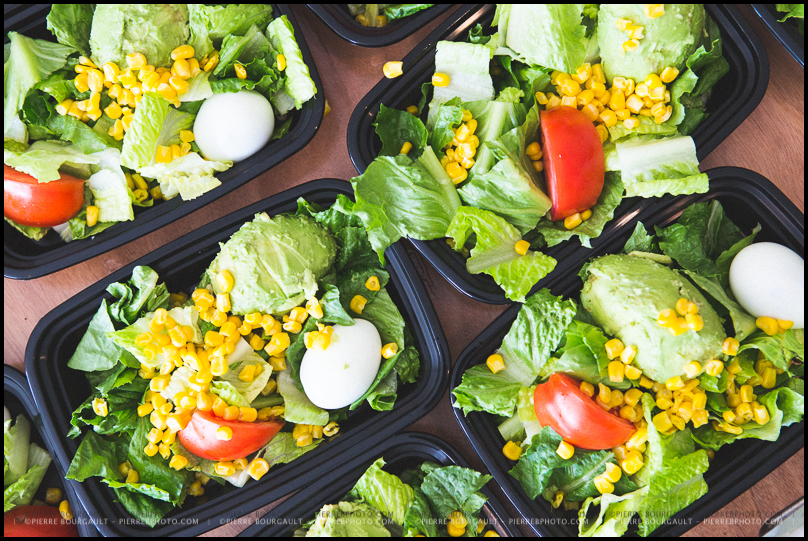 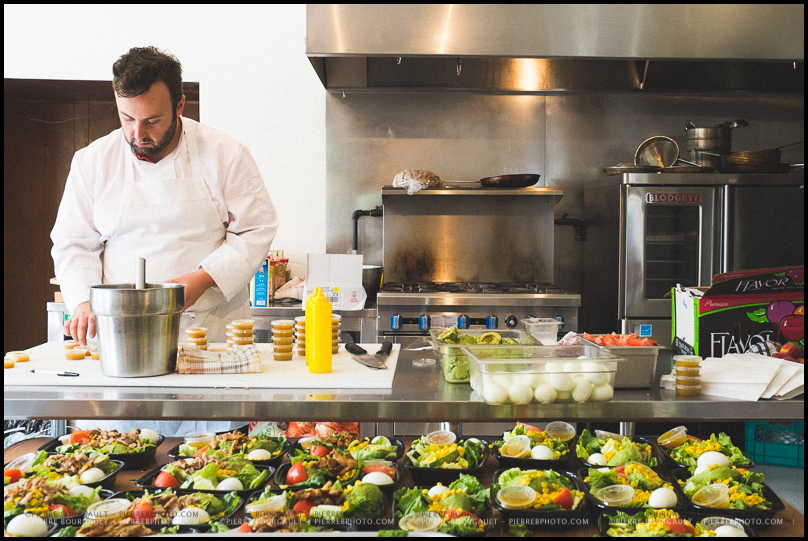 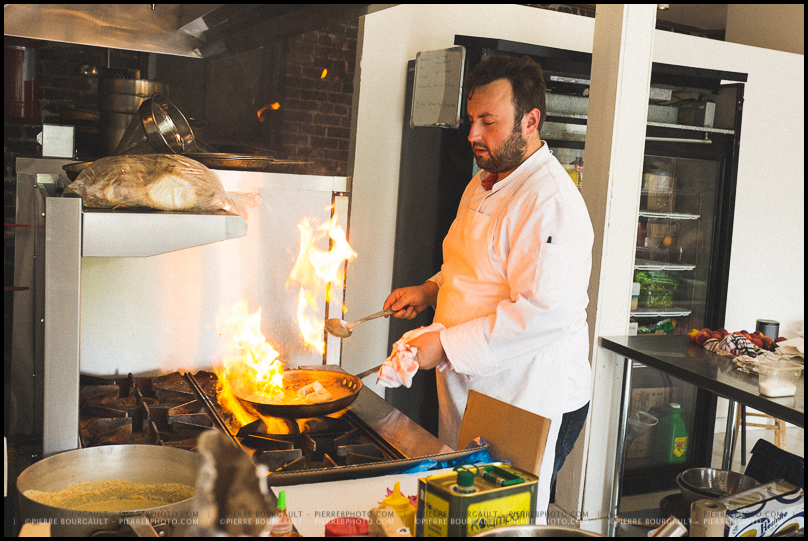 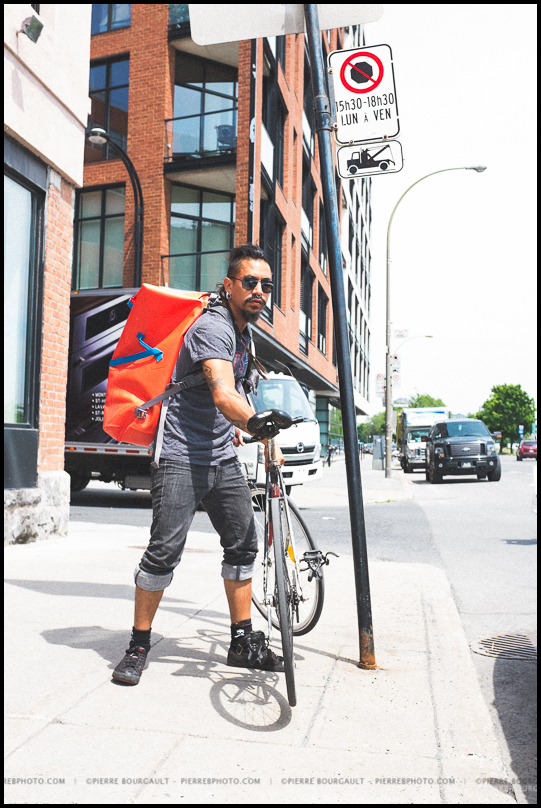 The headshots / employee portraits were a challenge to do as we were shooting while chef Marco and the gang were actually preparing all their orders for the day.  The delivery people, who also help out in the prep and package of the meals, are there for a short time, everyone is busy, it’s a huge rush.  So trying to find a quick moment to nab a portrait of someone, often having just 1-2 minutes, means being on the ball.  Some planning ahead of time of where the best light and background is made the shots that much easier.

I also found it important to vary the locations.  As they didn’t want a very copy/paste style look, having everyone with the same background was not an option.  Using the waiting room, the kitchen, outdoors and even the alley… basically anything that would add some variety.  The staff were totally great to work with, always smiling and ready to take a minute out of their hectic rush for the shots!  Love clients like them 🙂

Consistent feel is also key.  The shots I prefer are all landscape orientation (easily cropped to square), but not knowing how the images would be used, I also shot in portrait orientation, and usually outputted a series of 5-6 shots per employee 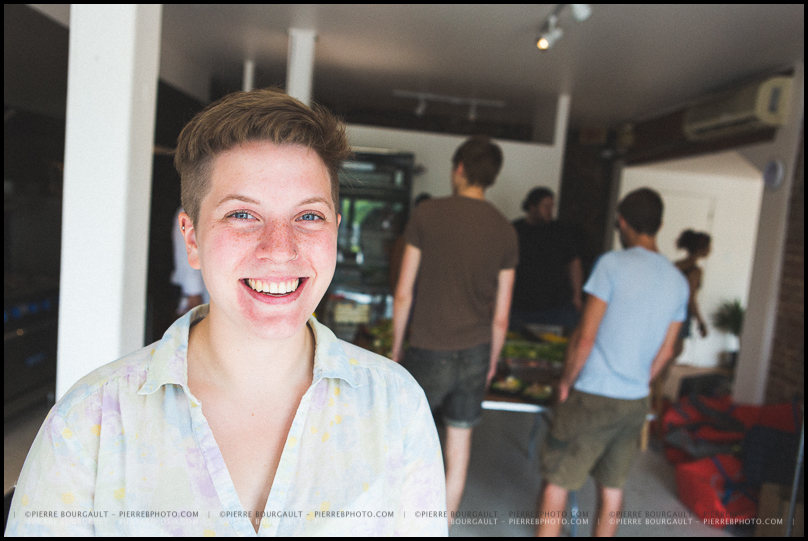 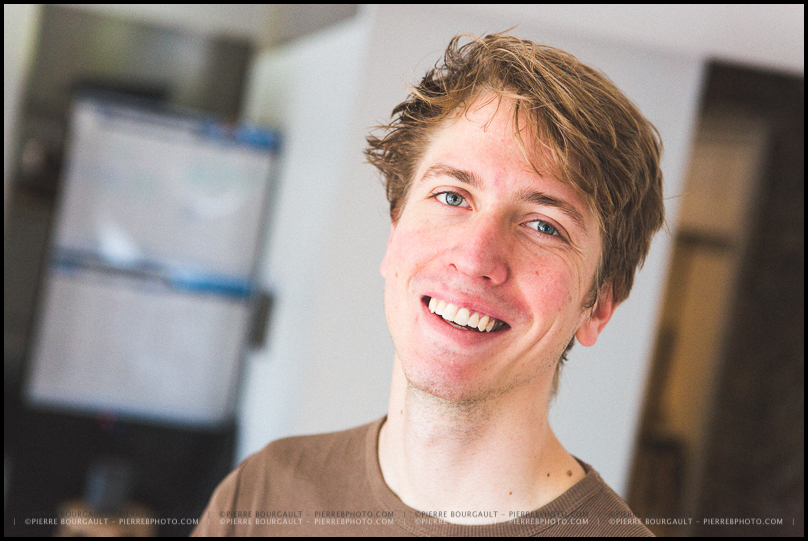 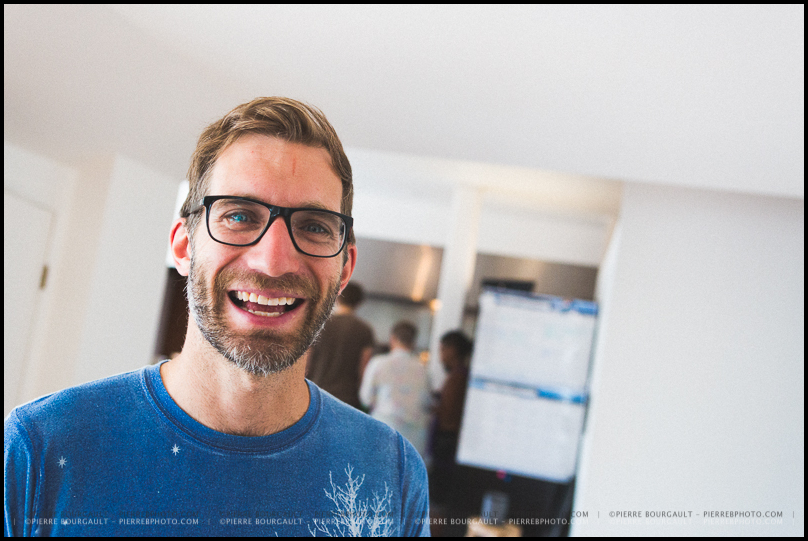 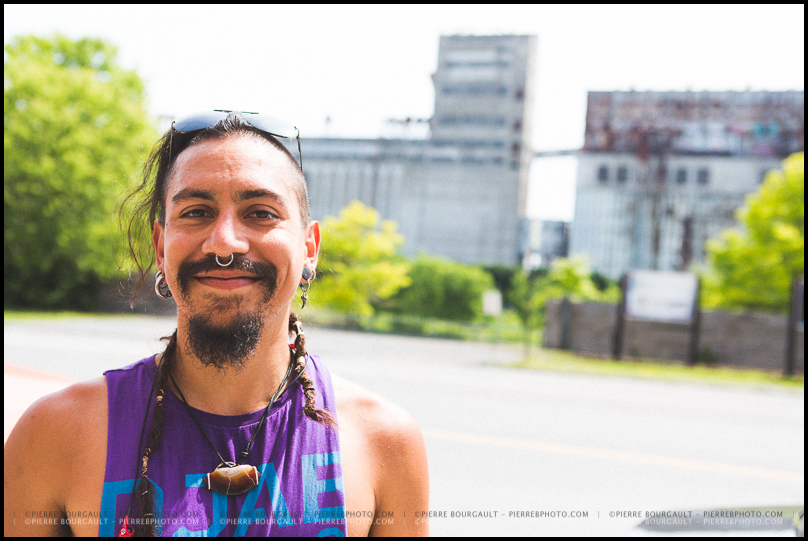 I have to say, working all day smelling and tasting the food that is being prepped is hard… you want to eat it all!!  Camera tethered to my laptop for easy viewing (and approval by the owners as we went), tripod, camera looking down, remote triggering.

TIP If you are using natural window light, be very careful that no one stands in front of the window.  Seems obvious, but when working in an environment with a coordinator, stylist, 2 photographers, 3 owners and 5 delivery people, it’s hard to keep track of it all. 🙂

TIP 2 Again, if you plan on using window light, make sure you have a good 2-3 hours straight to get your images done and plan it that they are all done in the morning or the afternoon.  Unless you know exactly how the light will change during the day, keeping things in a tighter time frame means more consistent images and less post processing 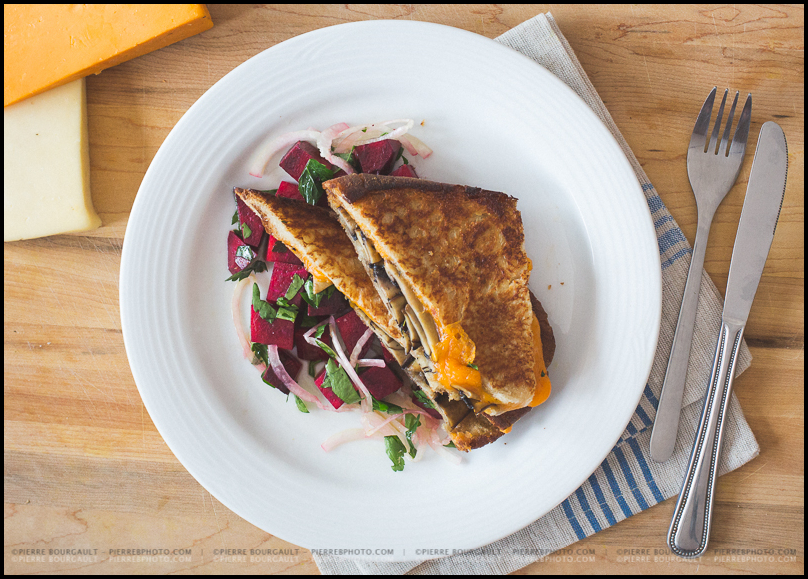 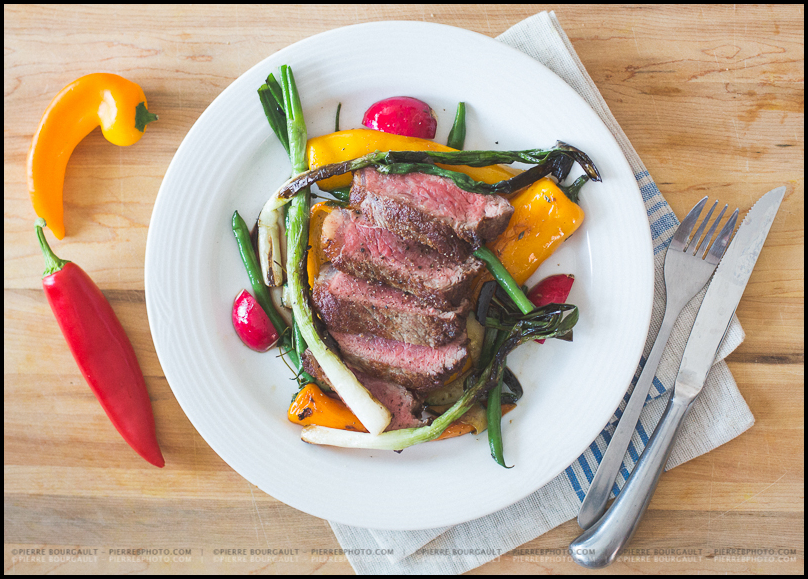 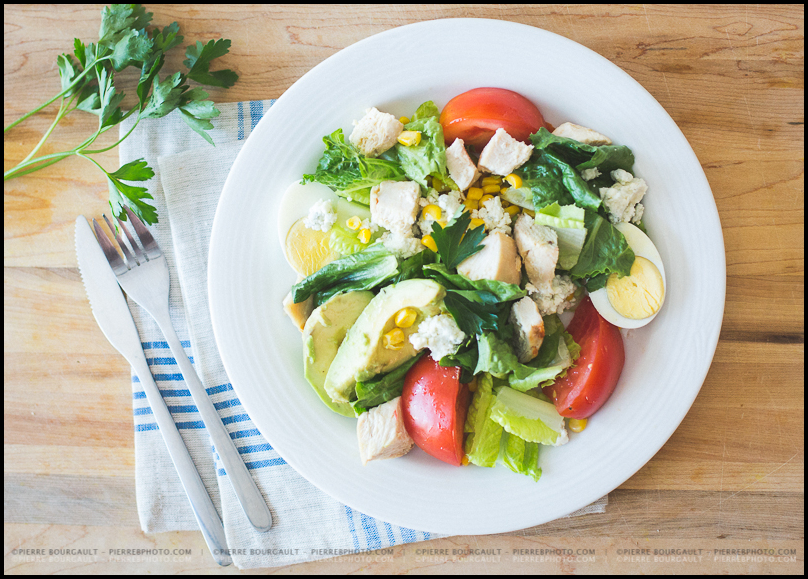 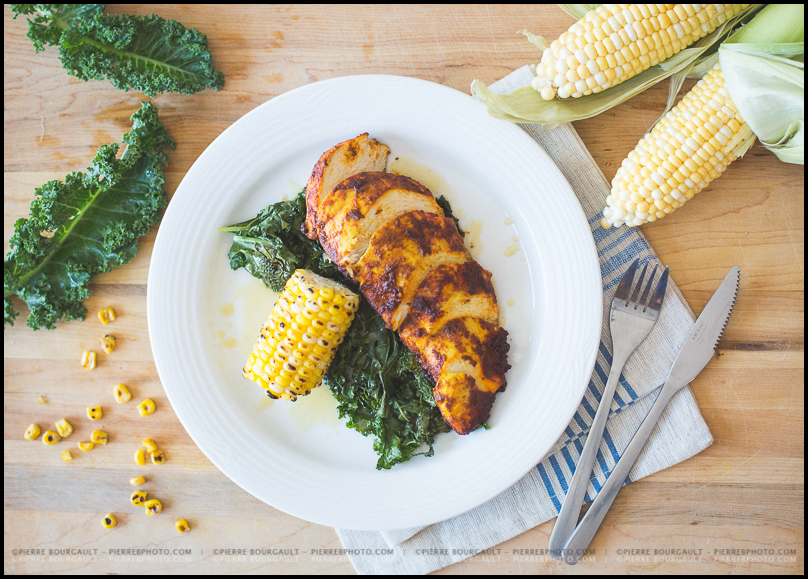 Always give them more than they want

This is a personal working philosophy I’ve had for many many years, and doesn’t just apply to photos.  Don’t be shy to go above and beyond, and keep your eyes and ears open for opportunities.

One of the reasons they wanted Emilie for the styling was an image they saw where the food was on a blue cloth.  The blue being very very (very!) close to their company colours, they wanted to use the cloth as a backdrop for the header images where they have multiple plates in the same shot.

Well… the cloth turned out to be way smaller than anticipated, to the point where we could fit 1 maaaaybe 2 plates.  They were obviously a bit disappointed, but we ended up using a nice wood table that had loads of character, which totally matched their company vibe. 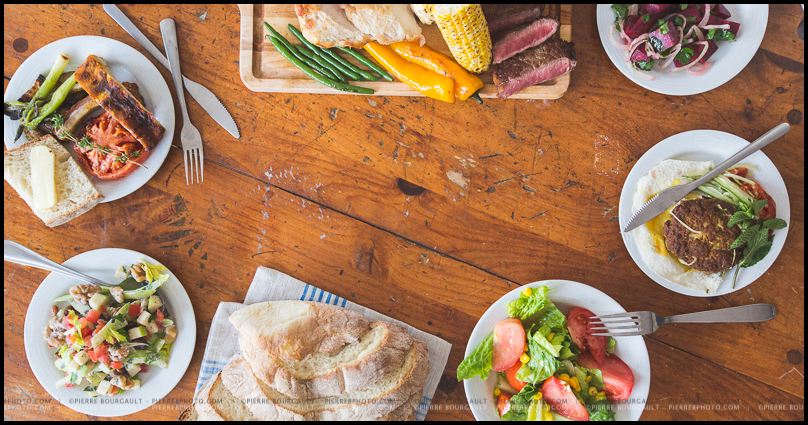 After we were done shooting the table, I got the idea in my head to Photoshop the image, clean up the table and…. change the colour.  So when I got home, I did a few tests and sent them off to see what they thought 😉 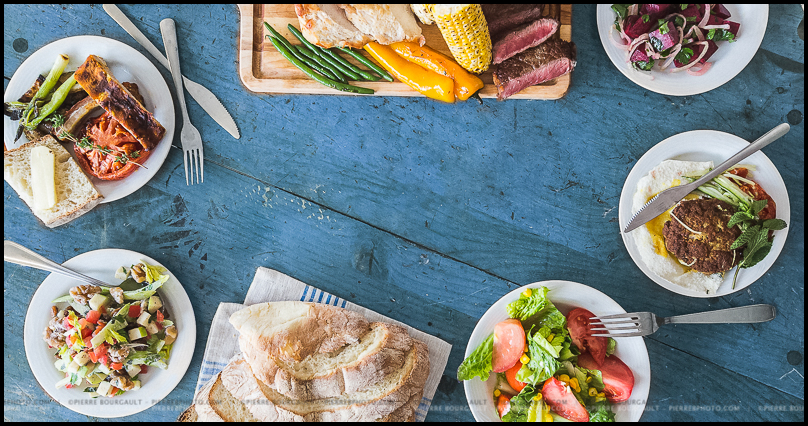 So there you have it, a day of food shooting with Pierre B Photo :).  We had a blast, shared a bunch of laughs.  It’s days like this that really make me love my job.  Producing great images and most of all, having a really fun time doing so 🙂 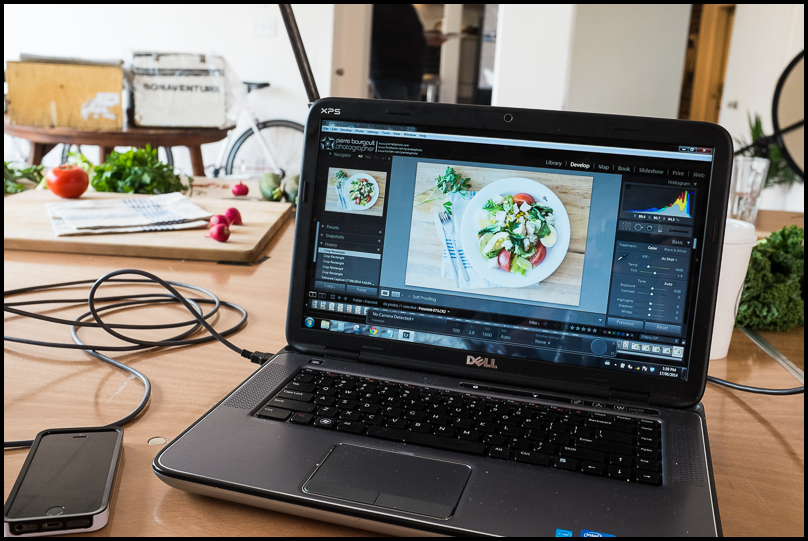 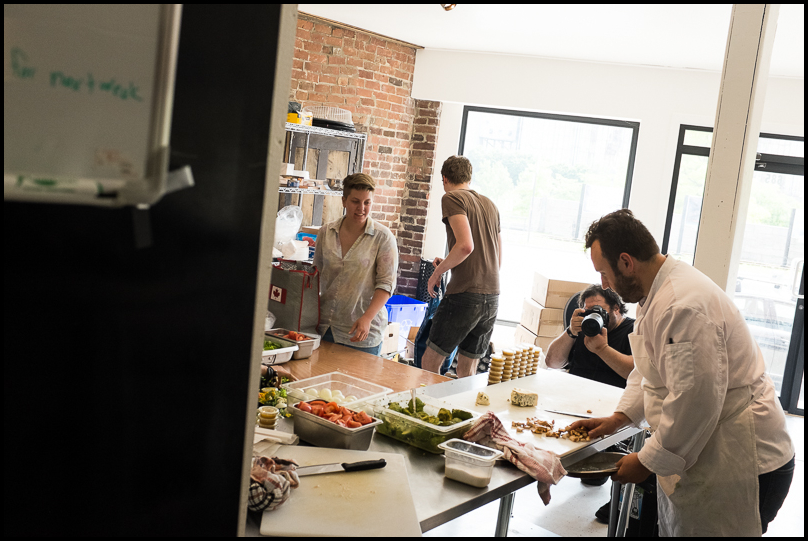 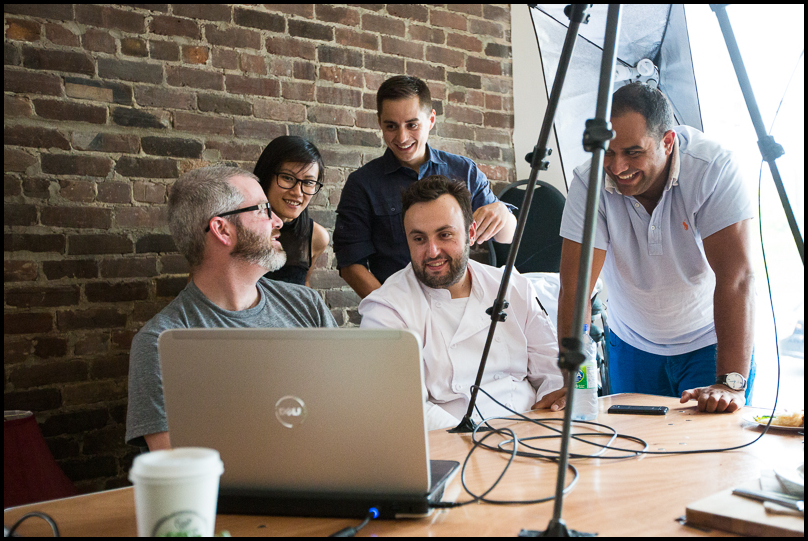 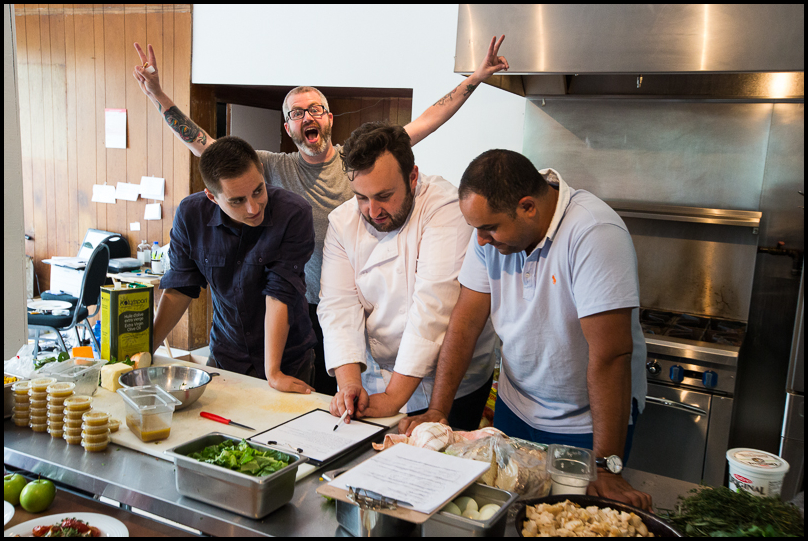