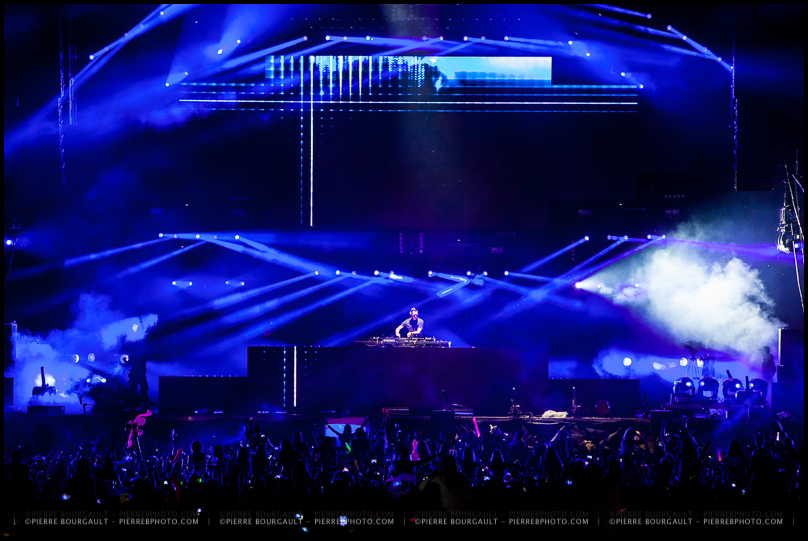 I have photographed DJs before.  While EDM/electro (whatever you want to call it) is not my scene, I always found it a challenge breaking out of my comfort zone and try to output the best images I can.  But they were always bigger name artists that were on stage and I had the typical 3 songs (or 15 minutes, whichever comes first) from the pit.  One of the funner shoots I had last year was Steve Aoiki at the Metropolis.  While I’m not a fan of the music, the party atmosphere and how the fans just thrive off the music was really amazing to see.

A few weeks ago I was hired to shoot the first installment of the IleSoniq festival.  A 2 day EDM party put on by local promoter Evenko (the ones who bring you Osheaga, Heavy Montreal, and pretty much any other big show in the city).  It was the first time they put on a festival catering to this musical genre.  It was also the first time I had the task of shooting 2 full days of DJs.  A total of 15 acts on the same stage (called the Neon stage – I miss my little stage that could!).  I did make some time to get out and shoot some of the bigger acts just for kicks… I guy has to have fun at his job, right? 😉 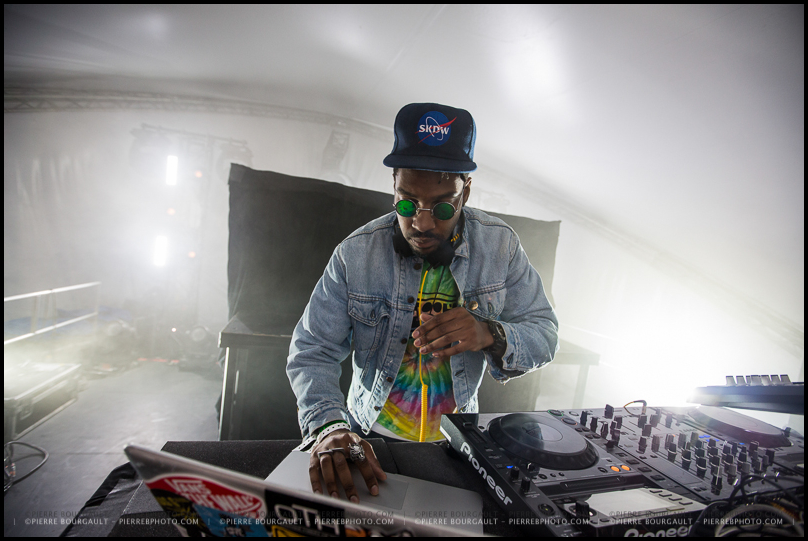 I won’t lie and say that I was a bit nervous in terms of the output.  Not only are the images used by all medias, newspapers and such without a photographer on site, they are used by the festival on their social media.  Images need to be shot and processed as the day goes.  So shoot, walk a kilometer to get to the trailer, ingest, edit, upload, head back out.  I wasn’t nervous for the intense work during the day, or the forecast of rain for the 2 days as I’ve dealt with that before.  I was nervous because the stage setup is the same for each act…. 1-2 people on stage, behind a table, with their equipment.   Shooting rock/metal/indie shows can have a different flavor as each artist has their own stage setup, varying number of musicians (usually from 3 to 6 on stage) which allows for a variety of images – portraits of each, interactions between, full band shots, side, front, etc.

So I figured I’d put up a few things I learned, which were a bit obvious at first, but really make a difference when shooting EDM. 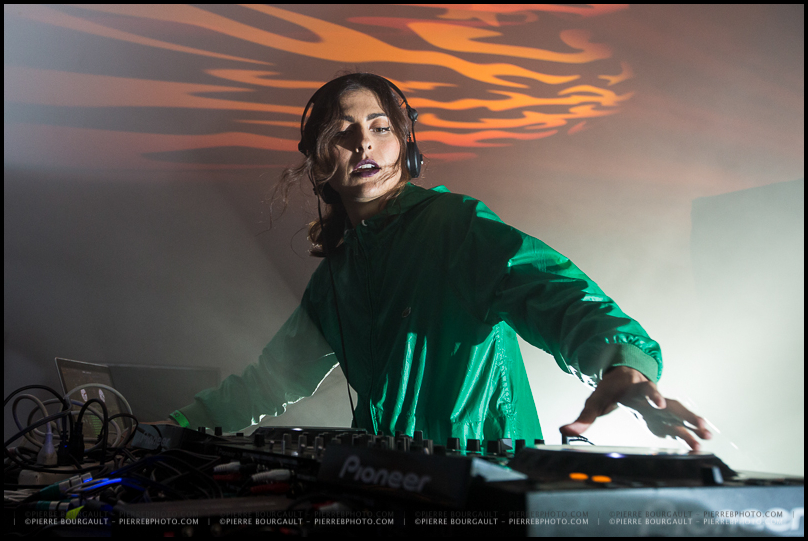 A wide angle lens is your friend.  I mean WIDE… as in ultra wide.  My Canon 16-35 was my go to lens for the huge majority of my images.  You typically get stage access and having ultra wide shots of the DJs spinning is great.  You are in their face and you need to get images that the fans don’t normally see.  This held true for the small stage I was assigned to shoot as I don’t have much room up on there beside the artist.  You could probably use a somewhat longer 24-70 lens on a big stage, but again, if you can get up close to the artist, wide works very well. 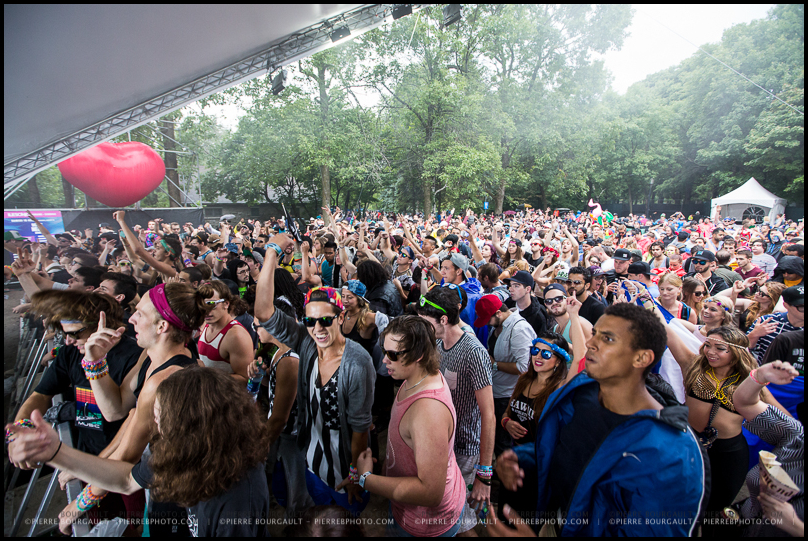 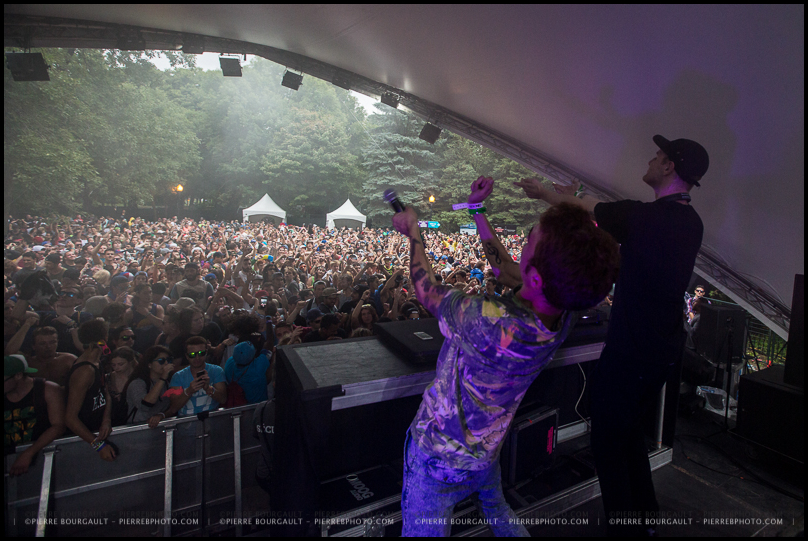 *Note about fisheye lenses.  These seem to be a norm in the genre, and they can provide some interesting perspectives.  But I find that always using a fisheye gets boring and tedious.  It’s a great lens style to use for a few shots, but if I had to go with 1 lens, it would be an ultra wide zoom.  Which is what I had. 🙂  I did recently shoot another EDM festival and did have a fisheye, and still found myself going back to the 16-35 more often.

2- The fans… and their selfies 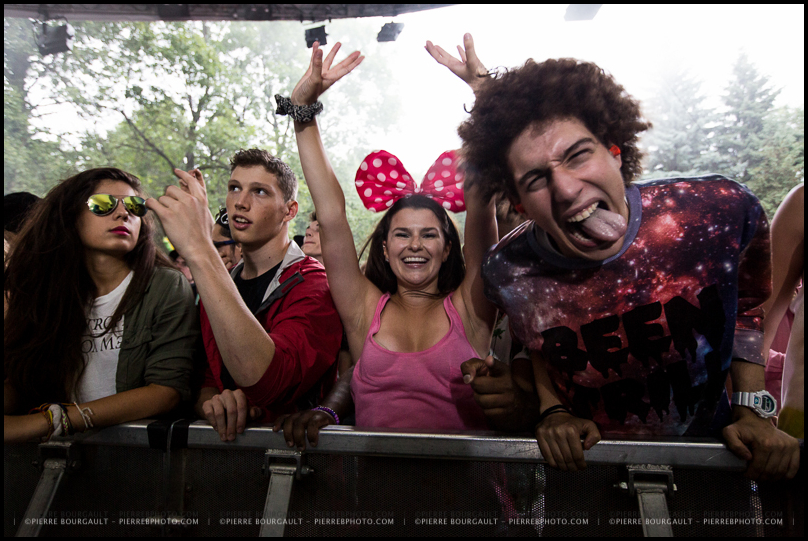 More than in any other genre, I found that EDM has a huge aspect about being seen and photographed.  People dress up.  People are colourful and tripping (in more ways than one) at the shows.  Social media is huge for EDM with constant twitter and instagram images, hashtags, selfies on top of shoulders, GoPros on sticks. 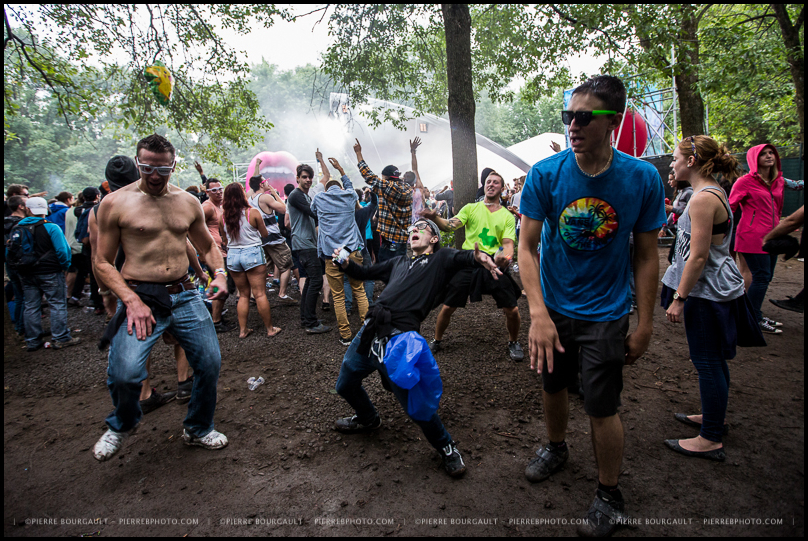 So when shooting the festival, fan images are a must!  It does get annoying when you are hustling from one stage to another and are constantly stopped to take a picture of someone with an odd hat, but this is part of the game.  The festival is all about the fans (they buy the merch, they buy the beer, they buy their tickets, they support the artists) and making some interesting fan images is key not only because it makes the fans enjoy their day.  So don’t be a grump, shoot the fans.

When you are up on stage, it shouldn’t take you too long to make some decent images.  While waiting for another photographer to complete their stage shooting, hang back and out of the way (respect among photogs is key), take images of fans from up high.  Trust me, they are looking for you 🙂 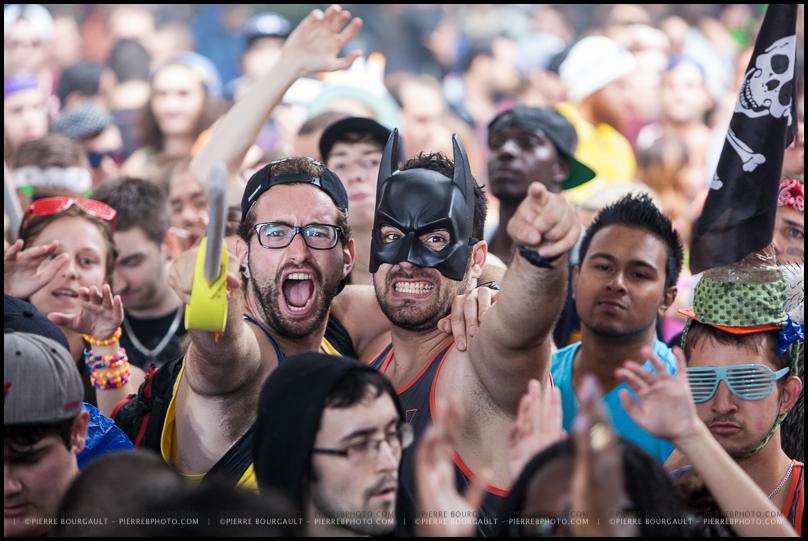 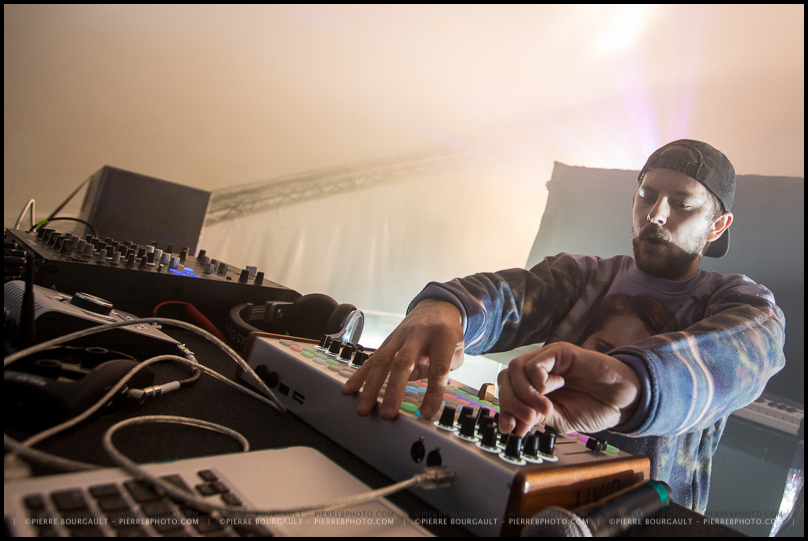 I touched quickly on it just before, but respect goes a long way in concert photography.  Even more so in EDM when shooting on a stage.  We can sometimes end up being 2-3 (or more) photographers on stage at the same time and we are all trying to get the best images.  Limit your time on stage (but still get your shots), keep an eye out for the other photographers and where they are standing so you don’t get in their shots (and they should do the same for you).  When you are done shooting, don’t hang out on stage.  Get your ass off stage as you could be in someone’s shot.  You aren’t part of the show, fans don’t want to see you bobbing your head to the beats

Respect the artist!!  You are on THEIR stage.  You are (sometimes) allowed to get right up in their face for some shots.  Get your shots, but don’t linger.  You are in their world, and while they are used to seeing cameras in their face, let them be in their bubble. 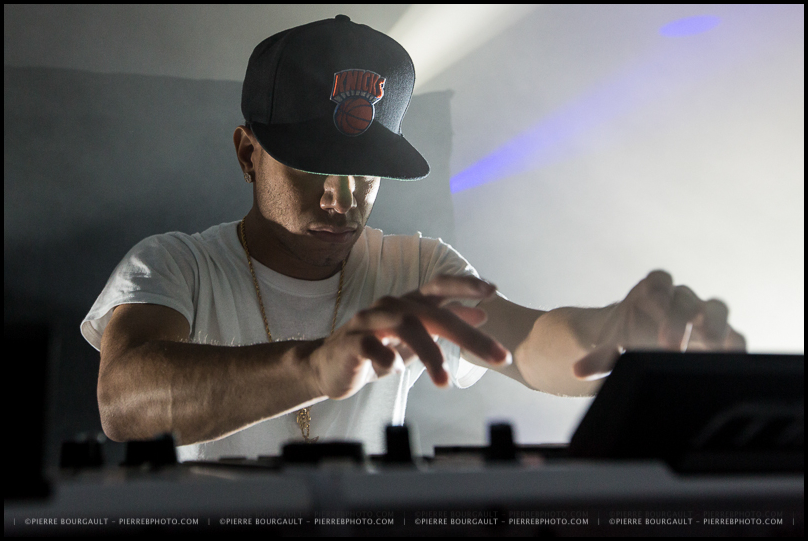 Respecting the artist also means fan respect.  While most are there for the music, they are looking at the stage, the lights and the artist.  And seeing you up there for too long can get annoying.

4- Don’t just shoot from the stage 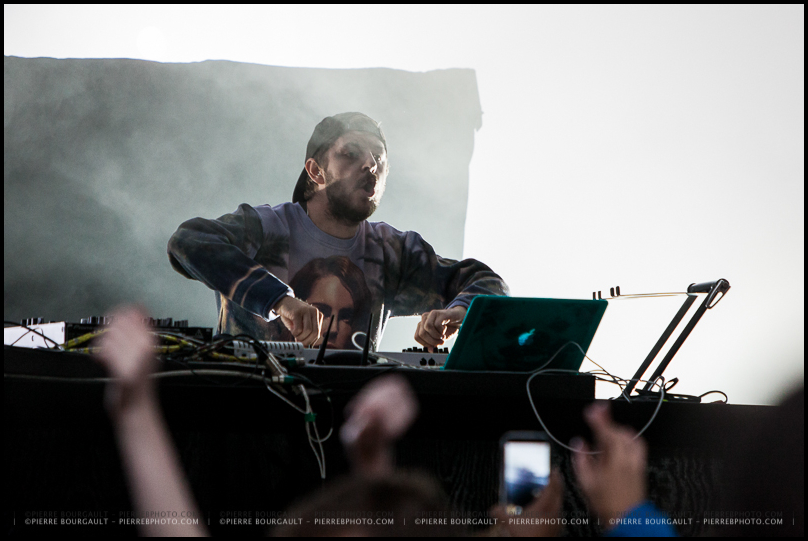 Yes, stage access is fun and gives some great shots.  But don’t forget to get shots from other angles.  The pit can give some interesting angles.  Get to the back of the crowd and shoot the stage from far capturing some lights and shadows, and these are a big part of the show.

When taking images from the back, get your camera up high.  This could mean finding a place to stand higher up, you can bring a monopod and get the camera up (using either a 2-10 second shutter or a pocket wizard to trigger), or even just holding the camera over your head. 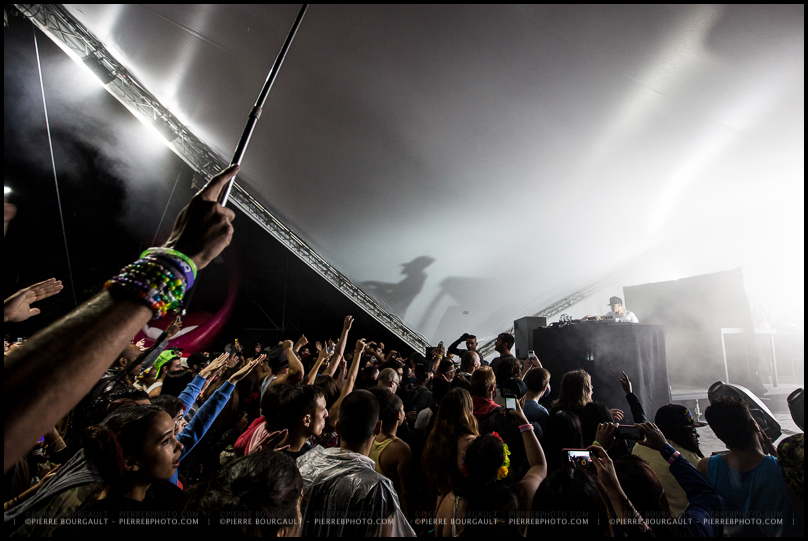 QUICK TIP:  if you are holding the camera over your head, don’t shoot blind.  Put your camera in live view where you see the image on the LCD to help compose your image. 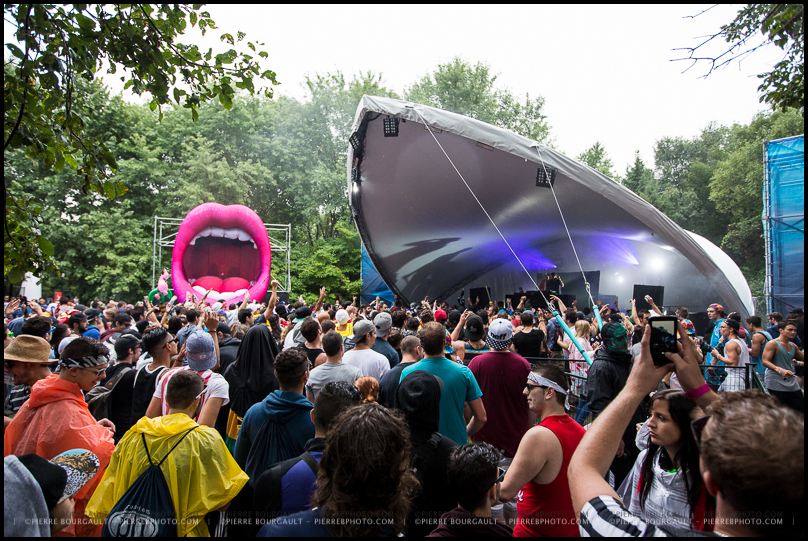 5- The details tell the story 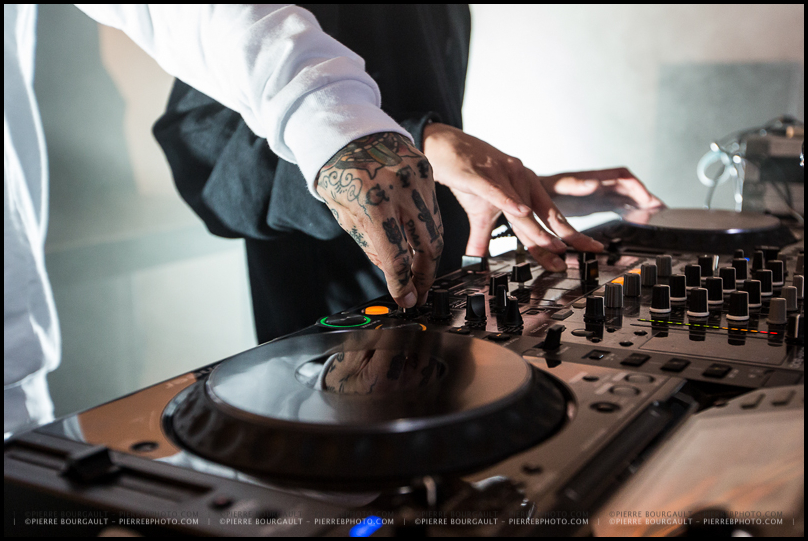 The artist’s instrument is their equipment.  Getting close ups of the instruments can add a lot to your photo story.  Same goes for the lights.

Listen to the music and know when the drops are going to happen.  These are key to being able to photograph things like smoke, light blasts, change in light configurations, which all add to the set of images. 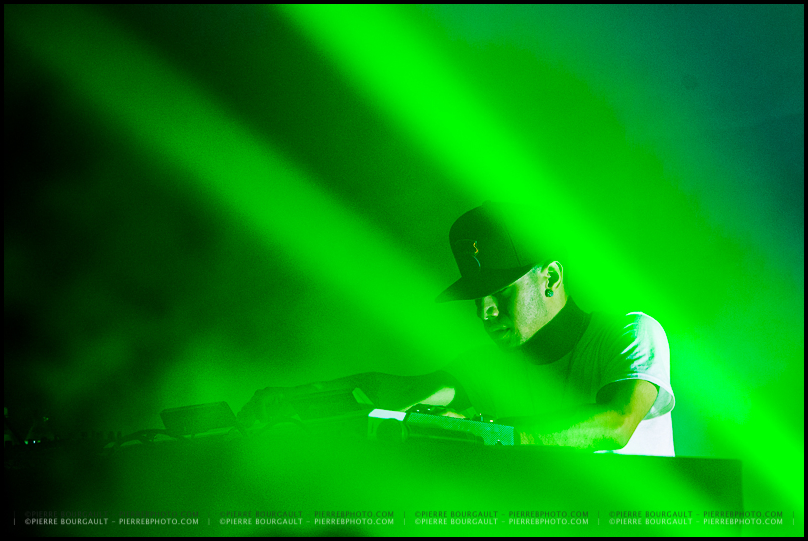 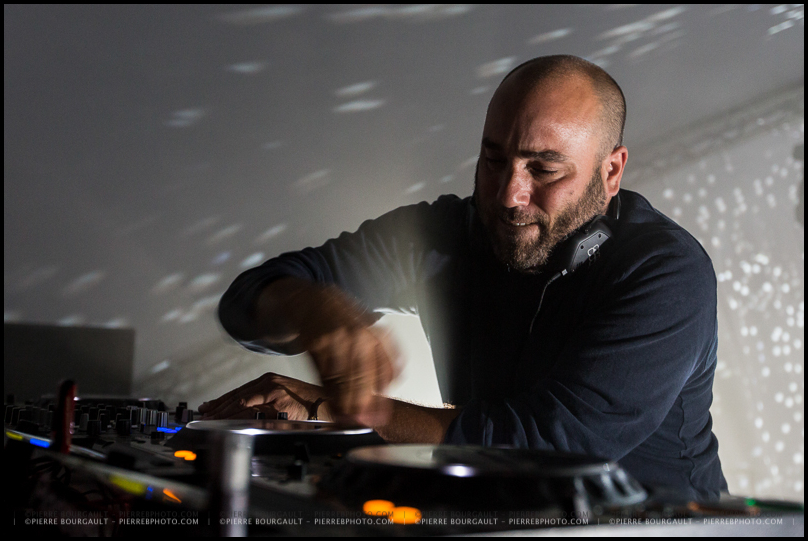 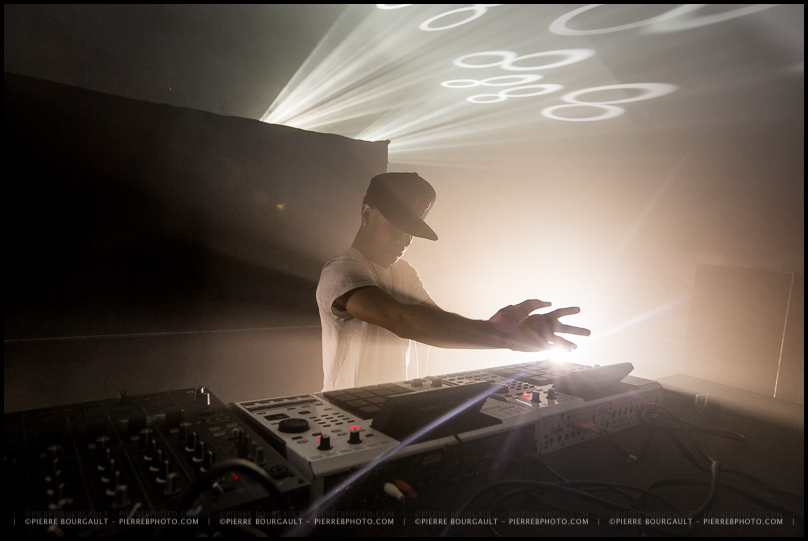 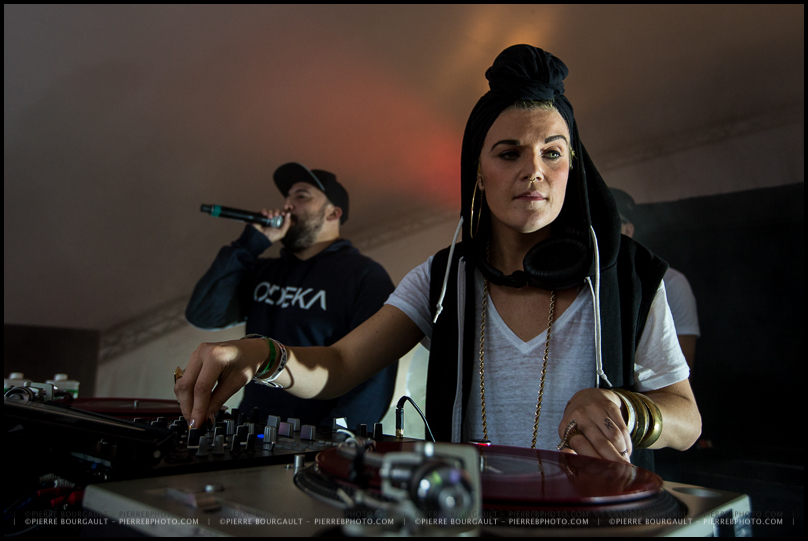 It seems that the norm for shooting EDM festivals is not the typical I am used to for concerts.  You usually get 3 songs and then out, but the rules are way more relaxed here.  In one festival I was allowed 3 minutes on stage.  In another, it was limitless (see note 3 about respect 😉 ).  I found that shooting during the start of the set is not always the best and showing up later in a set means that the artist and the fans are more into the music.  With a pretty packed schedule, I need to plan my day to ensure I get my images in a timely manner. 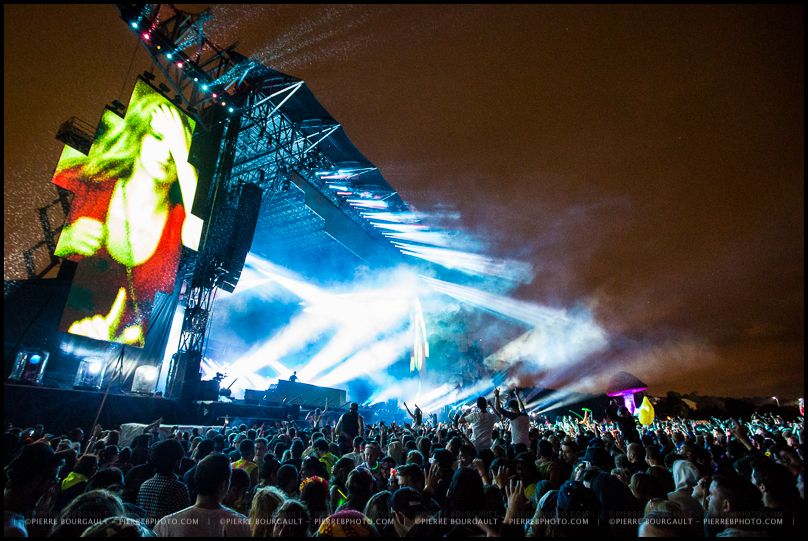 I always shot the start of the set to get a good series of images done.  But once those were processed and uploaded on the promoters cloud, I would get back to the stage 10-15 minutes early and shoot the end of the set.  It would sometimes give me a new set of lights to play with, some special guests on stage.  If things were similar to the start of the set,  I would do my crowd and detail shots.  So I would work a typical 1h00 set as follows:

15-50 minutes: walk to trailer, ingest, process, upload, fill up on food/water/bio breaks, walk back to the stage or visit other stages quickly 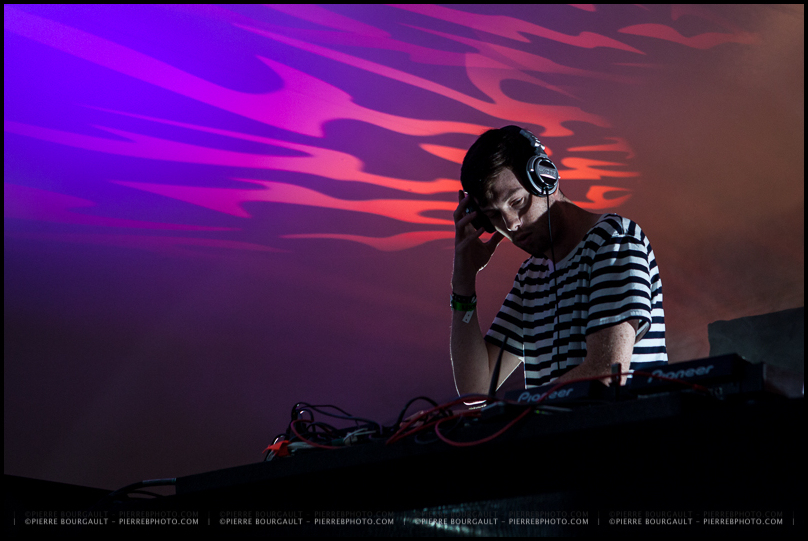 Much of this applies to all types of concert photos.  Varying your angles, getting up high, get some detail shots, respect all around.  But I found that in the world of EDM, they are way more important to getting a full set of proper images.  You can not capture some fans at a metal show, or not get the guitar of an indie act and it’s fine – hell, you can miss that stuff at an EDM show and still pull off a nice image set – but keeping in mind some of the particularities of shooting an electronic show will hopefully help get some killer shots.

EDIT: A photographer pointed out another big aspect of shooting EDM is that you are allowed to use flash, which is something that is not permitted in 95% of all other types of shows.  I did have a flash with me and I didn’t use it for a few reasons

1- Most everyone else had a flash.  I’m the type of person who sees everyone on the left, so I go to the right.  I like to get something different than what the masses have.

2- I’ve been shooting shows for a while and am used to pulling out images with the ambient lights, and often aim to play on those lights to create a mood and style.  It’s what I’m used to, so when I’m paid to cover a festival and have to output quality images quickly, I find it’s not the best time to practice a new skill.

Looking back, there are some instances where flash would of helped.  There are some images where the artists were dark, the fans were bright.  Helping to balance out the daylight and the darkness of the stage.  So noted for future EDM shows where I can practice a new skill.  Not that I don’t know how to use flash, just haven’t applied it to this style of shooting.

Look for a blog post in the future about this.  Thanks for the note Paul 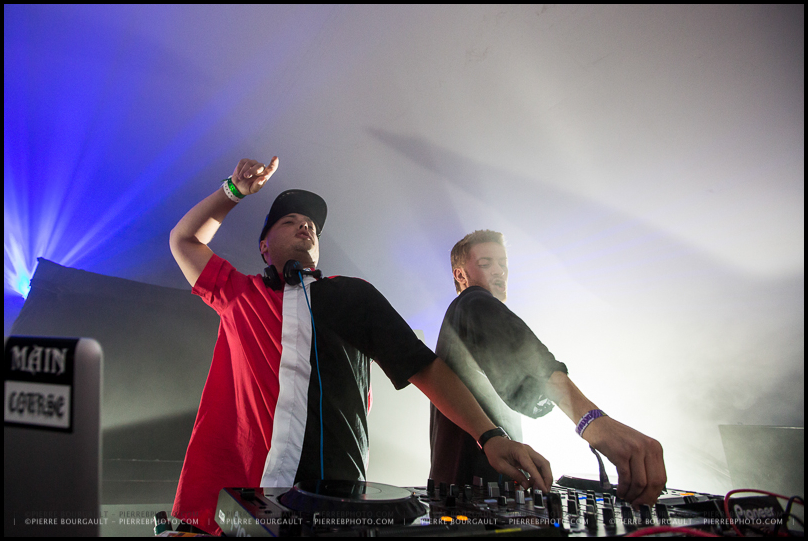 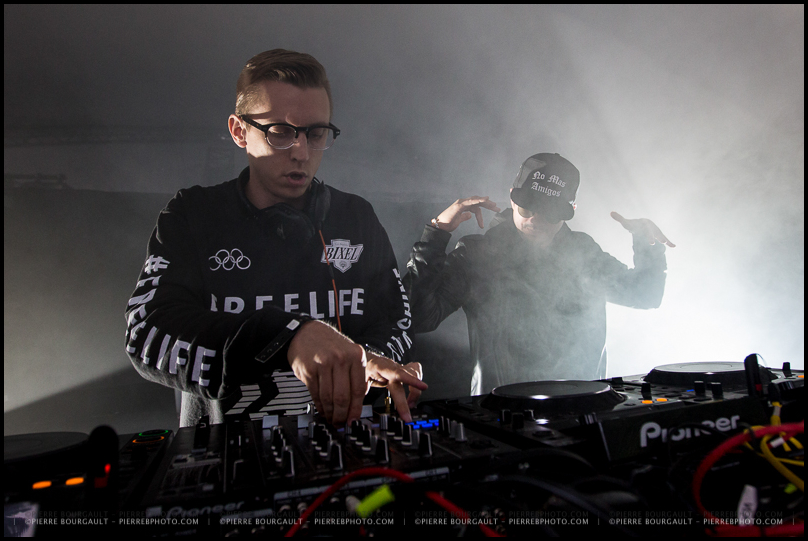 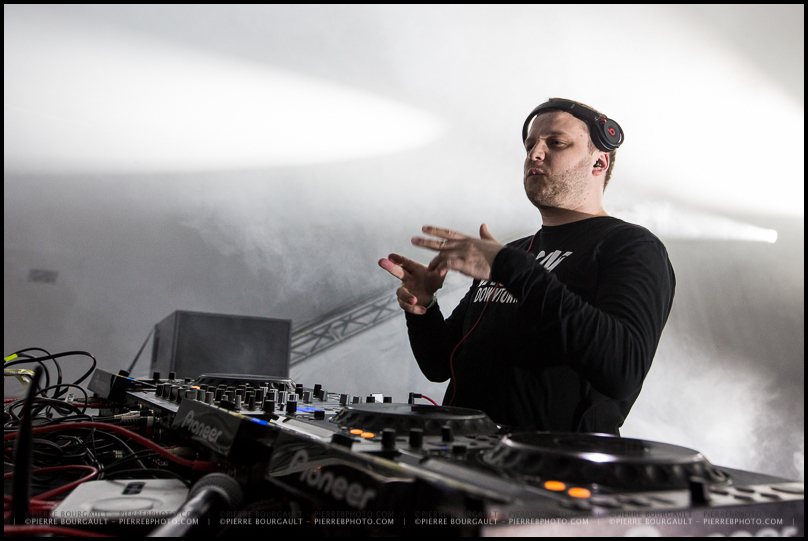 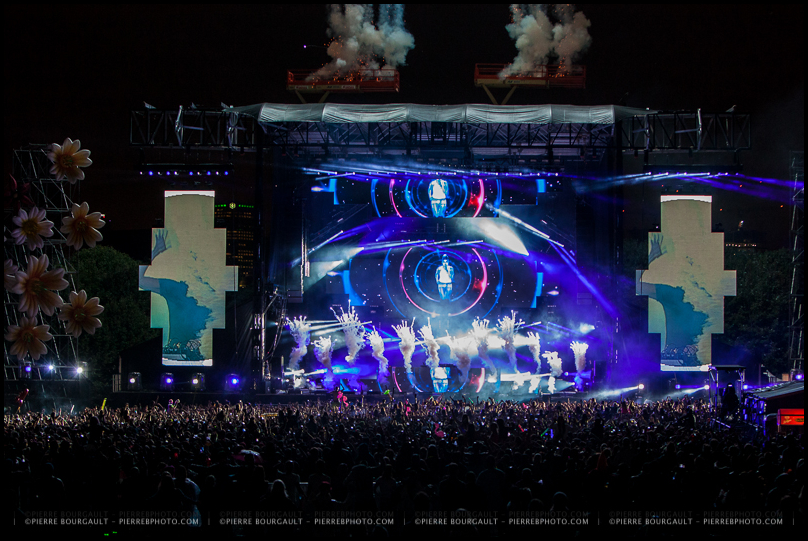