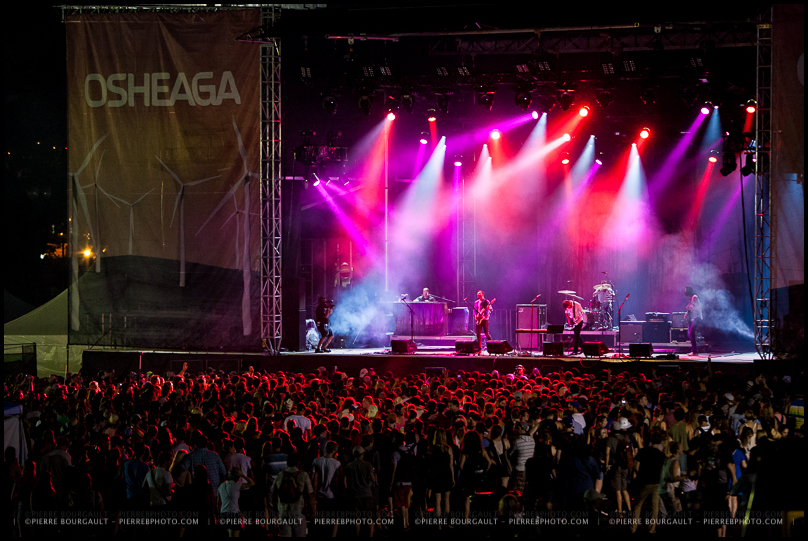 Covering a festival as a media photographer is a hell of a lot of work. You are bouncing from stage to stage, trying to keep up with what your journalists are covering. If you are lucky, your media got more than one photo pass. If you are not, you are flying solo.

Covering one of Canada’s biggest music festivals as part of the official festival team is a whole different level of rush. Osheaga Music and Art festival. 3 days. 6 stages. 5 photographers. One covering the two main stages, one doing the electro stage, one doing the second end stage, one roaming with an open book to shoot anything, and then me… the new guy… covering the two smaller stages. With shorter set times, that means more bands to cover.  Plus we are all doing crowd and installations shots in between bands while we walk around.

I was psyched to be added to the awesome talent already on the official photography team. I knew I needed to bring my A game. But I didn’t know I needed to bring so much energy. My average day was 1 band every 40 minutes. That means a few minutes to shoot (5-6 mins… never had time for the full 3 songs), 10 minute walk to the production trailer, download, editing around 10-15 shots, tag/caption images, upload. All that in 15 mins to make sure I had enough time to walk to the next band I had to cover with a few minutes to spare. From 1pm to 10pm. For 3 days.

Knowing that these images are going to be used by medias without photographers on site and also by the festival themselves… I couldn’t miss a show and my margin for error was quite small.  Shoot quick but shoot very well. But with the help of my fellow photog Tim (who covered a few of my shows, as I did for him – gotta love team work) and an awesome crew behind the scenes, things went amazingly well. And coming home just past midnight to have my girlfriend meet me to give me some home cooked food as I had no time to cook, was the icing on the cake.  I have a good life, what can I say.

You can see full galleries of each day HERE. I’ll just go through my best of shots and bands.

1- The artist that almost never was. 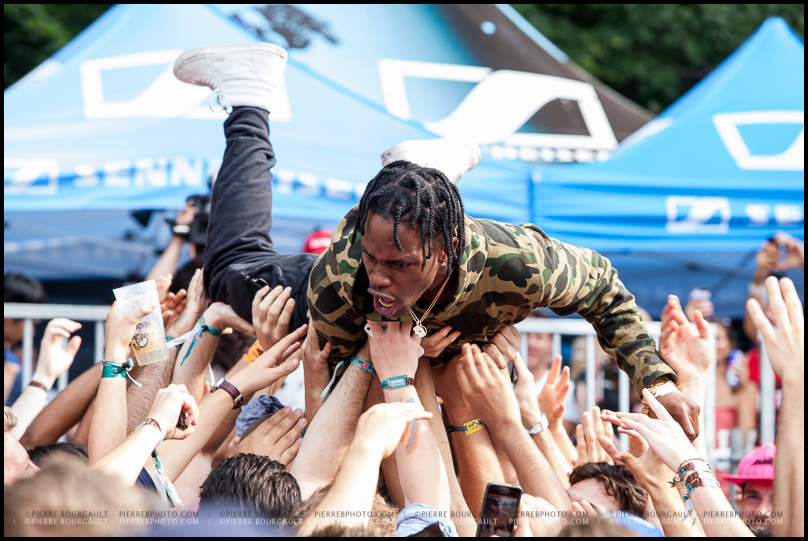 Travis Scott was scheduled to play on the Green Stage (not mine) early on Sunday afternoon. His plane was delayed. He was then assigned to play on one of my stages at 8:30pm. Ok, one more band. No biggy. Around 5:00pm, I get a popup on the app that tells me that he is playing a short set in one of the sponsor’s tents at… 4:45pm! 15 minutes ago. I grab my gear and rush out. While almost running to get there, as we NEED to get all bands, I manage to snap this while my feet are moving. 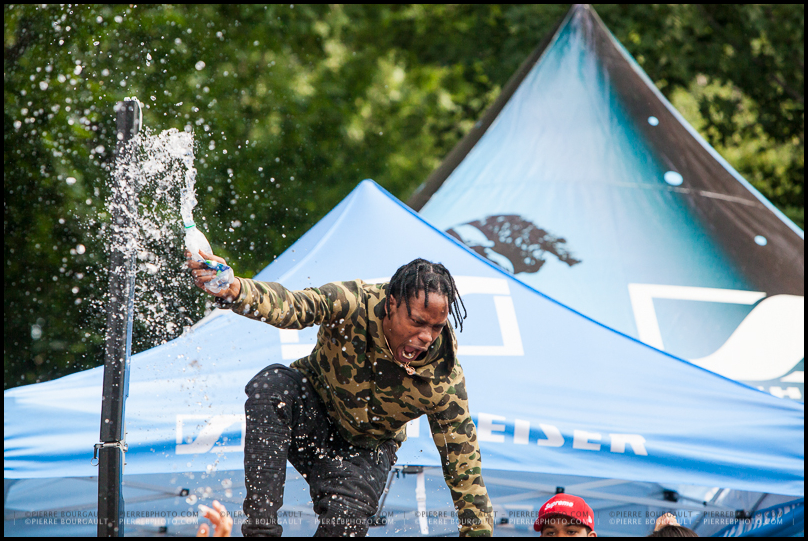 I then hung around a few more minutes and grab a few others. Right place, right time. 🙂

I was heading out to one of my stages and AFI was playing on the Green Stage (our trailer was right behind this stage, 3rd biggest at the fest). I had never shot AFI. So I stepped into the pit and the singer seemed to notice me showing up and gave me this photo. 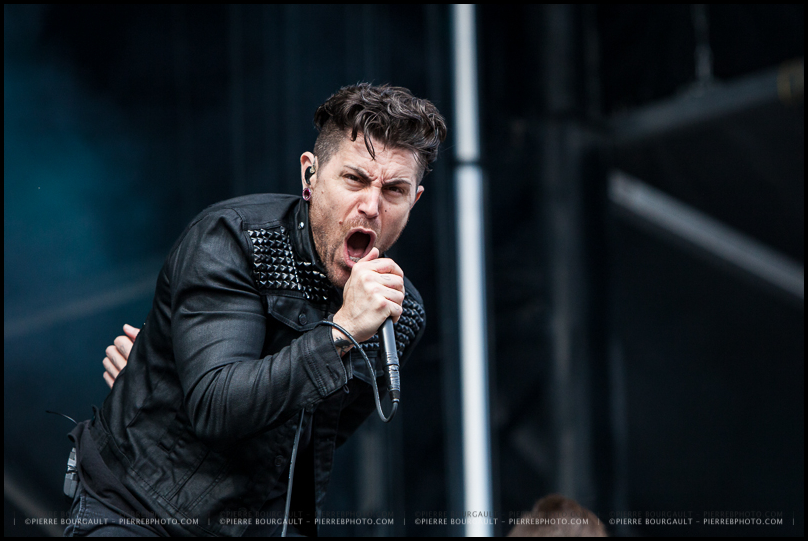 I snapped a few others, but 10 seconds after getting in, I had to leave. I wish all shows were this easy (actually, no I don’t haha). 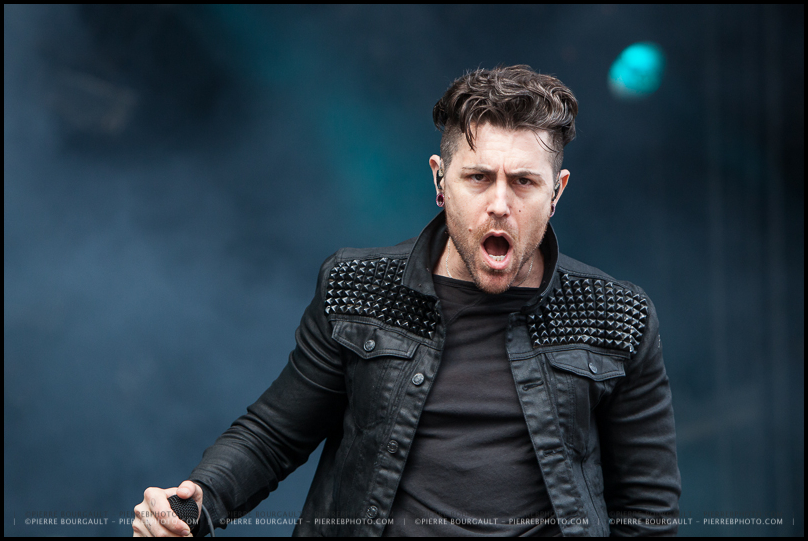 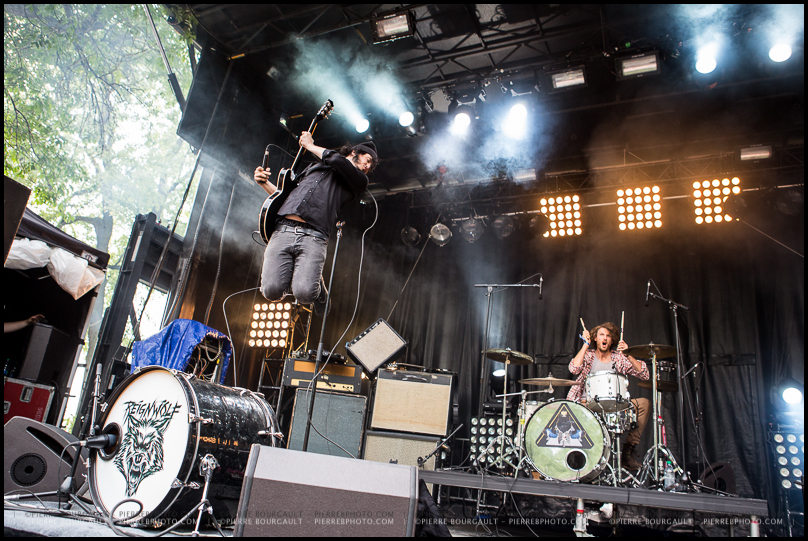 I had seen Reignwolf on the schedule for my bigger stage. I wasn’t sure it was the same band that had opened for Black Sabbath earlier this year, the one’s who had a crap load of energy on the stage. It was! Was honestly a nice breath of photo fresh air shooting a highly energetic rock band in a typically more indie festival. And getting a cool jump shot was all the bonus 😉 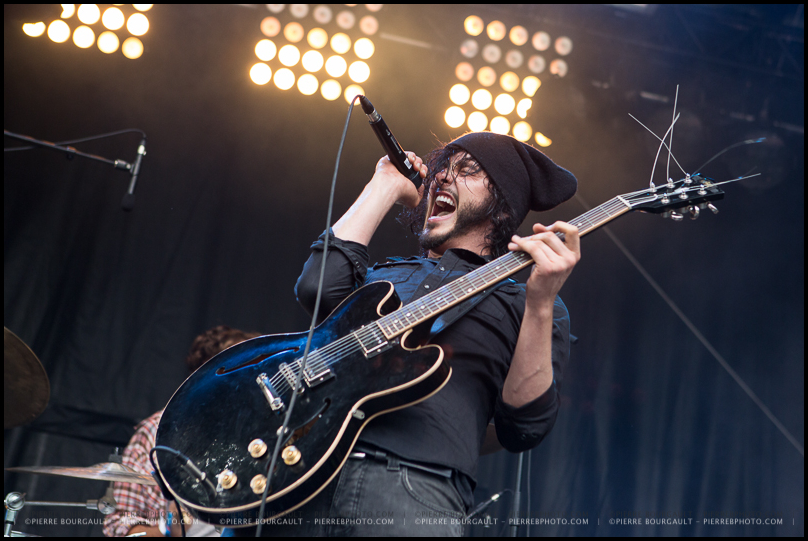 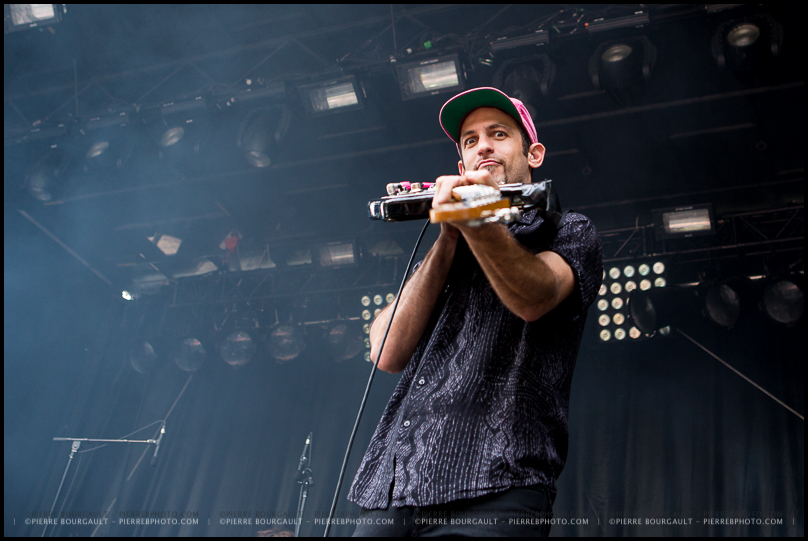 4- When the pirates invaded 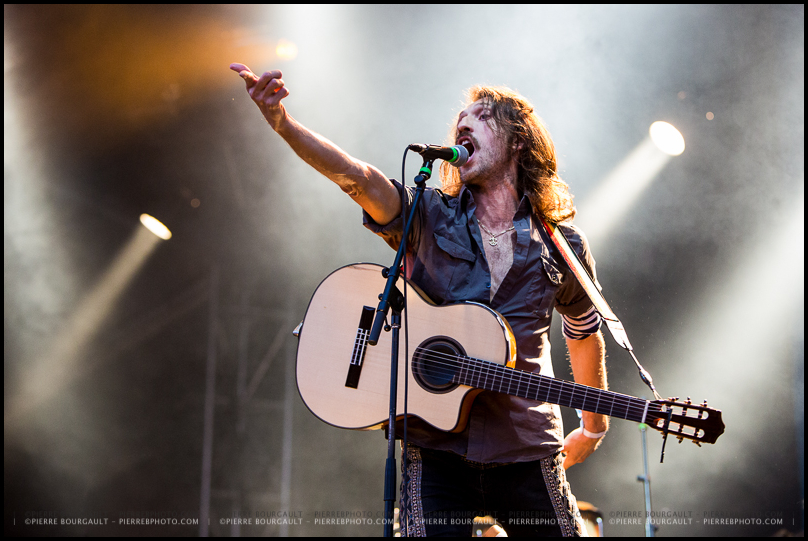 I missed Gogol Bordello the last few times they came to town. When Tim asked me to cover the stage while he headed over the main stage for The Replacements, I was psyched! He made it back on time, but I still shot a few songs. These guys were soooo intense. I was smiling like a kid at Christmas shooting these guys. So much going on on the stage, mouvement, energy, people jumping, moving, switching places, going back… it gave me a well needed adrenaline boost to finish off the last 2-3 bands I had on Sunday 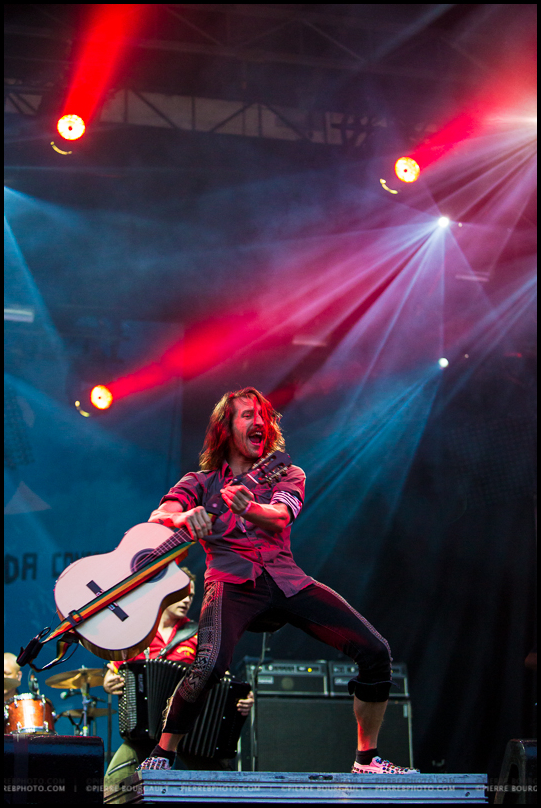 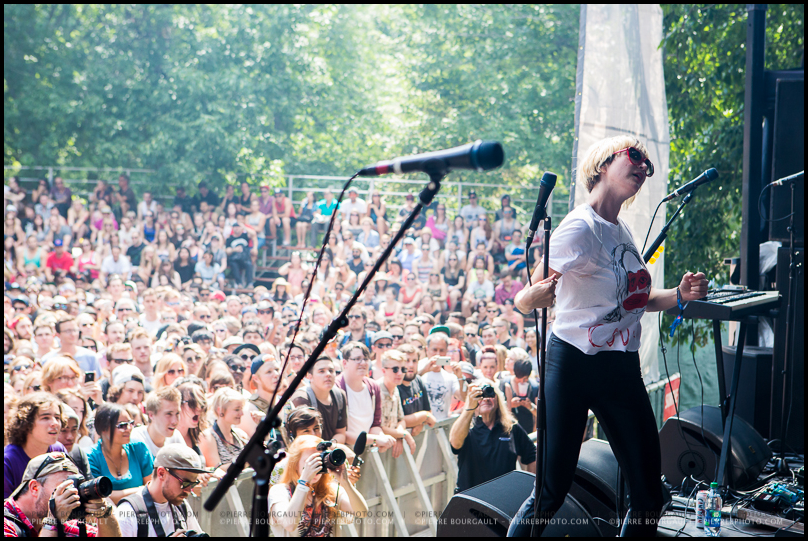 A friend had spoken to me about the band. I gave a listen, never really stuck. Seeing them live? I fell in love. They put on an awe-some show. They were the third band I shot in the entire festival and I think they set the tone. Some great blues rock. I just bought their album. 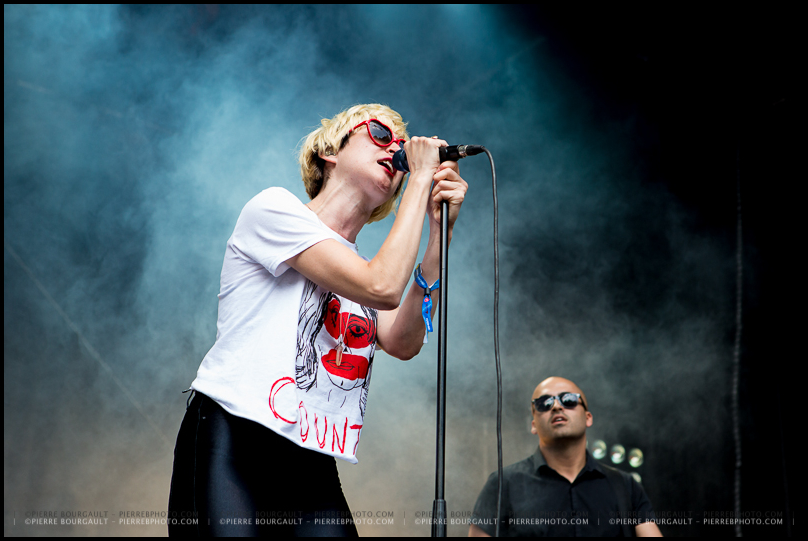 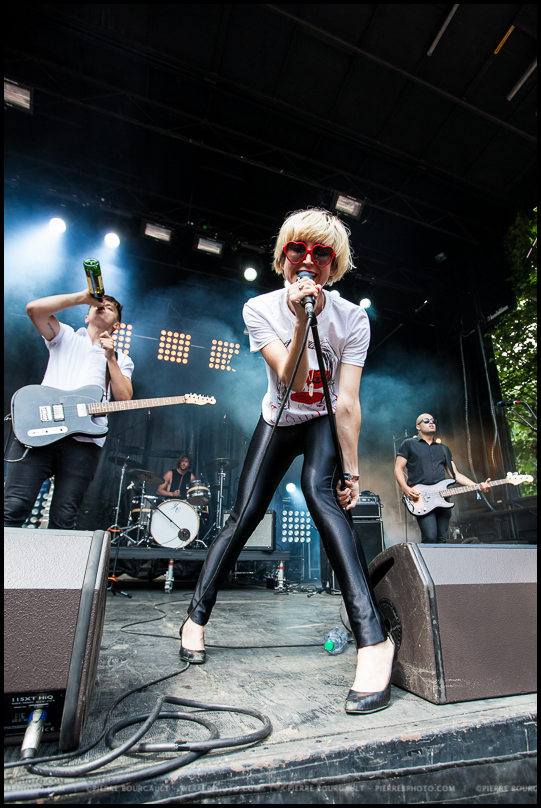 A few other of my favorite shots of the 3 days:

Playing with the light at the Jagwar Ma show. Was intensly backlight. Me likey.

!!! was doing his disco thing all around the stage, and in the crowd. Fun to shoot, didn’t take long to get a great set of images

Kate Nash came on with her band, all decked out in a funky dress and played some pretty sweet rock tunes

All in all, I shot 42 bands. Some more extensively, some for just a minute. I edited on site 39 of them. 3 of them I just shot for myself 🙂

No gear broken, covered all the bands, got some stellar images, shared a bunch of laughs.  A pretty successful first time coverage of the festival 🙂

Time to clean the gear and recharge my batteries (personal and digital haha), and I have 3 more festivals in the next 5 weeks! 🙂