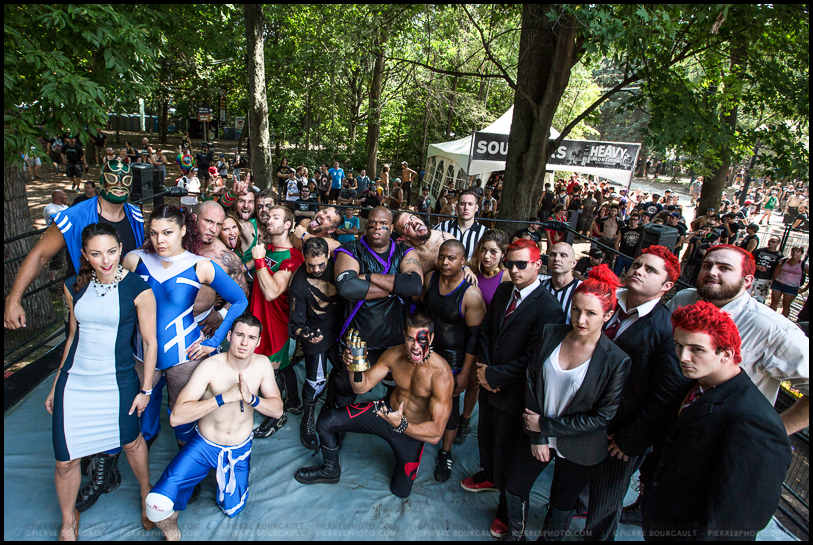 For my coverage of the Heavy Montreal festival this year, I was assigned to cover the Heavy Mania wrestling event.  With all the heavy music going on, I was to spend my days covering wrestlers.  I had mix emotions.  As a wrestling fan in the 80s and early 90s, I know the sport.  I know that it can be highly entertaining.  But with so many great bands on the lineup, I was missing out on shooting many of them (I still made time to shoot almost a dozen bands haha).

After 16 matches and almost 500 images submitted to the festival, I have to say, I had a pretty awesome weekend.  The wrestlers were pretty damn great!  I have seen a few indie wrestling matches over the years and wasn’t that impressed.  These guys and girls however, really gave it their all.  From story lines, interference, high flying acrobatics… to even getting the crowd pumped enough to really REALLY hate the heels (ie the bad guys) to the point where they were throwing beer cups and plastic bottles at them when they left the ring.

Shooting the matches was really intense.  We know it’s staged.  They don’t really hit.  But they put their bodies through so much, and it can happen at almost any time.  And let me tell you that some of those “fake” hits actually land.  A few wrestlers had bandages at the end of the day.  Darting in and out to take close up photos, being aware of people coming in from behind you, all while thinking compositions, settings and so on.  One photographer who wasn’t paying attention while fiddling with his iphone at ringside got ran over.

As I haven’t watched wrestling in a while, I spent the night before the festival watching some wrestling documentaries and old matches on TV to get back in the mood.

I decided to mainly shoot with a wide angle lens (Canon 16-35mm f/2.8) and get close to the action.  Just as shooting a show, you need to give people images they wouldn’t normally see from where they are standing.  I also used a Canon 24-70mm f/2.8 lens, but it wasn’t as useful for the type of shooting I wanted to do.

So I told myself that I was going to get these guys the best possible pictures I could.  I won’t post them all up, I narrowed it down to about 30 images.

The crowd at times was 10-15 people deep all around the ring.  The stands were full each and every match.  Seriously a great turnout for an event that was like it’s own world inside the festival.

Yep, they jumped from the top rope.  They jumped through ropes.  They were dropped on the metal barrier in front of the fans.  They flipped, they drop kicked, they power bombed. 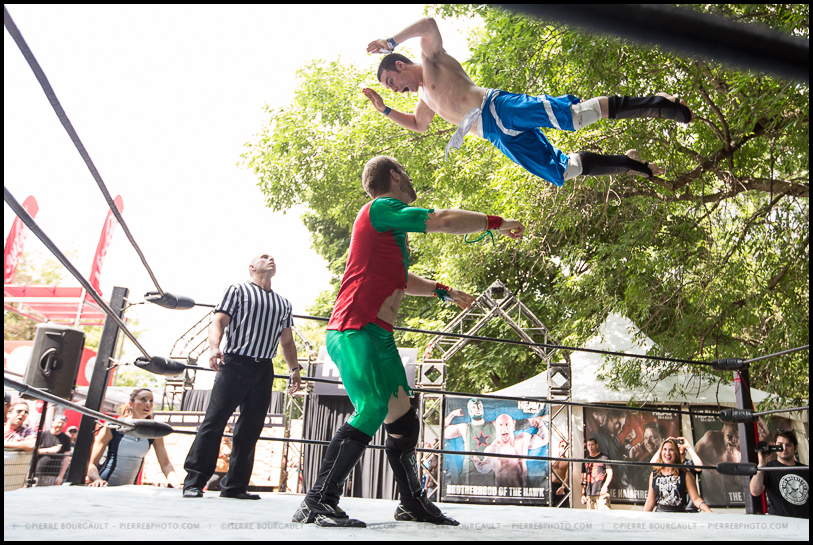 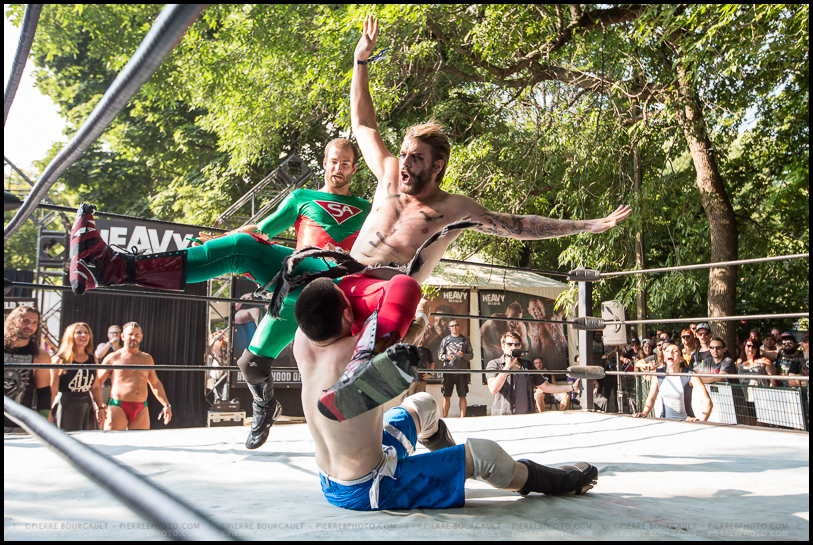 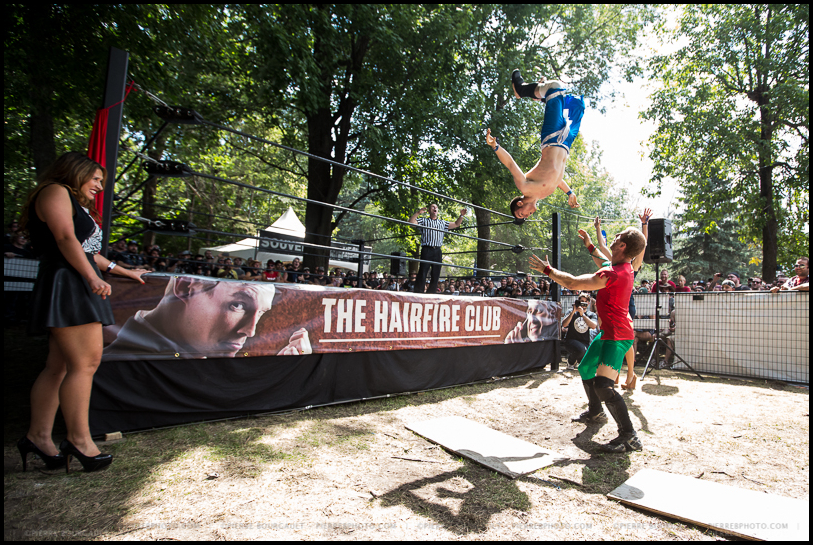 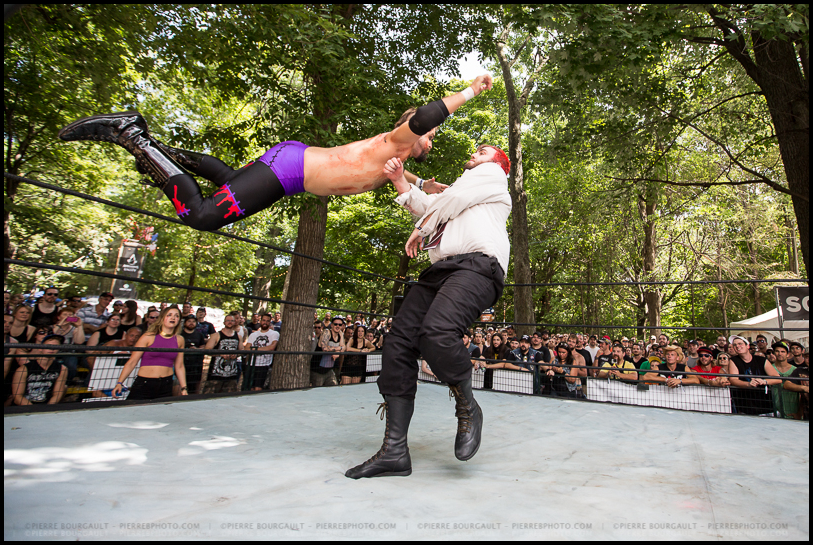 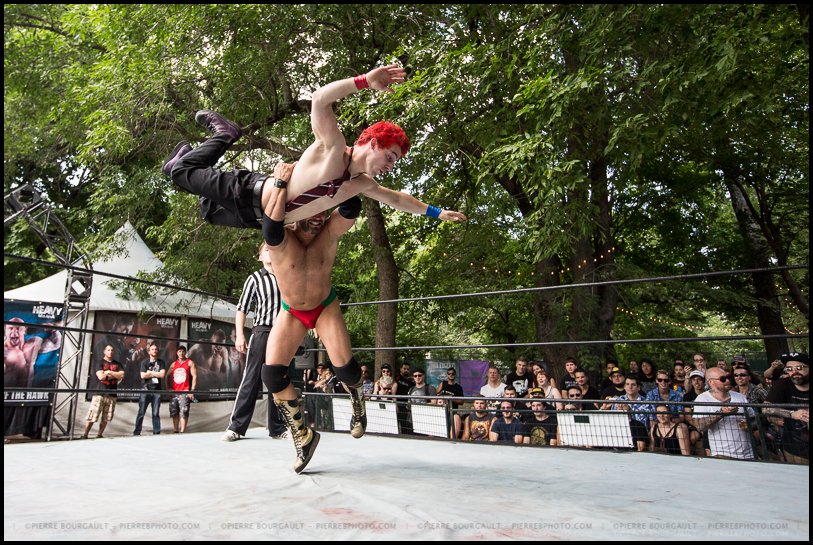 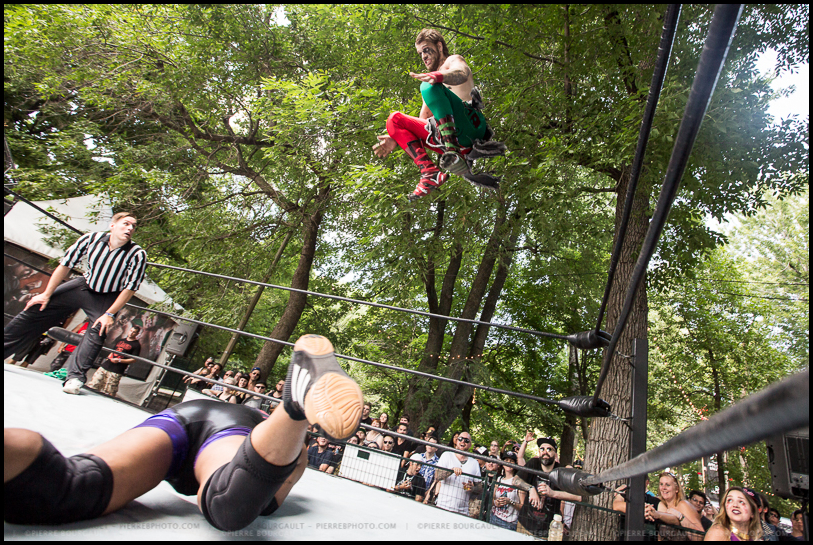 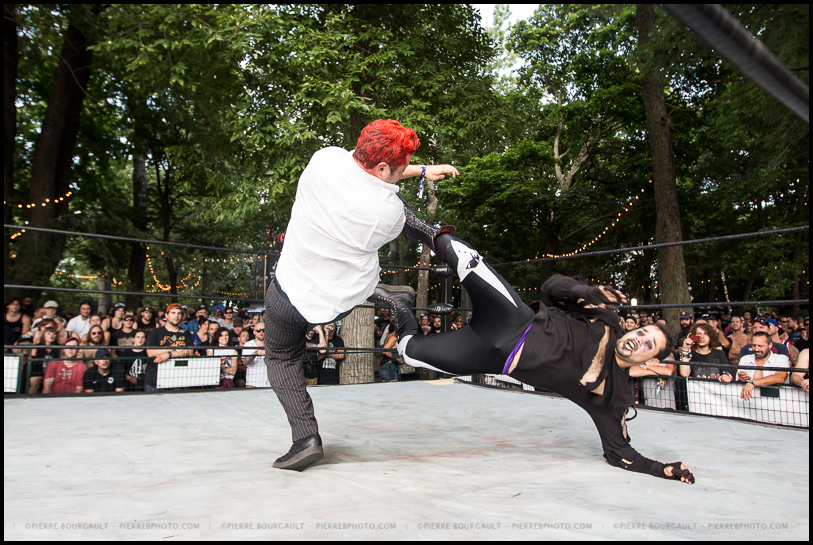 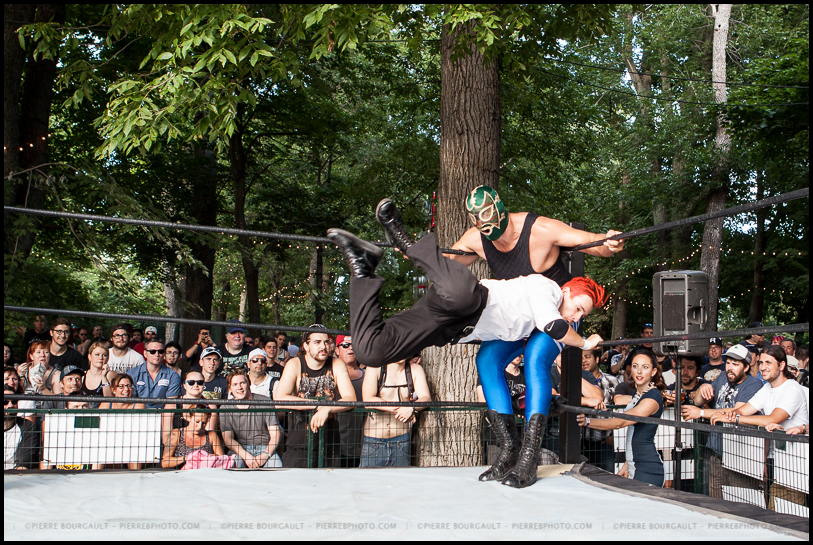 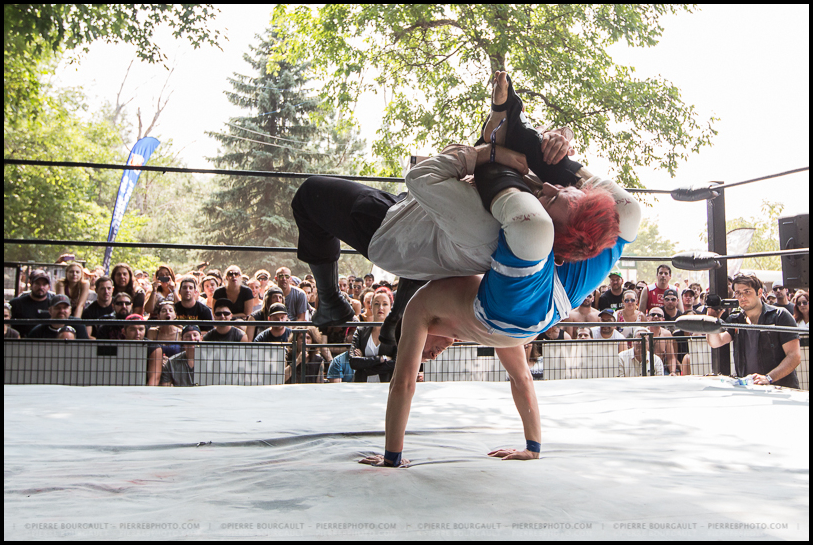 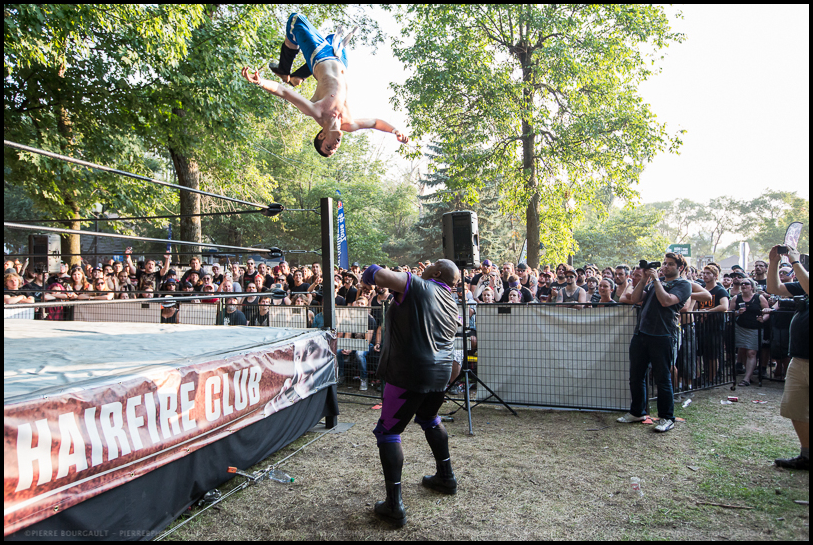 What wrestling match isn’t complete with some good old showing of strength!  Lifts, clotheslines and fists! 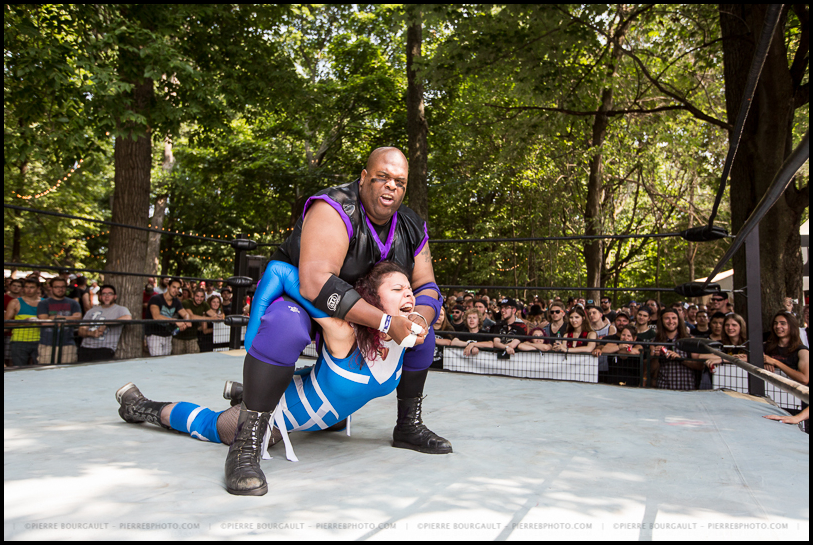 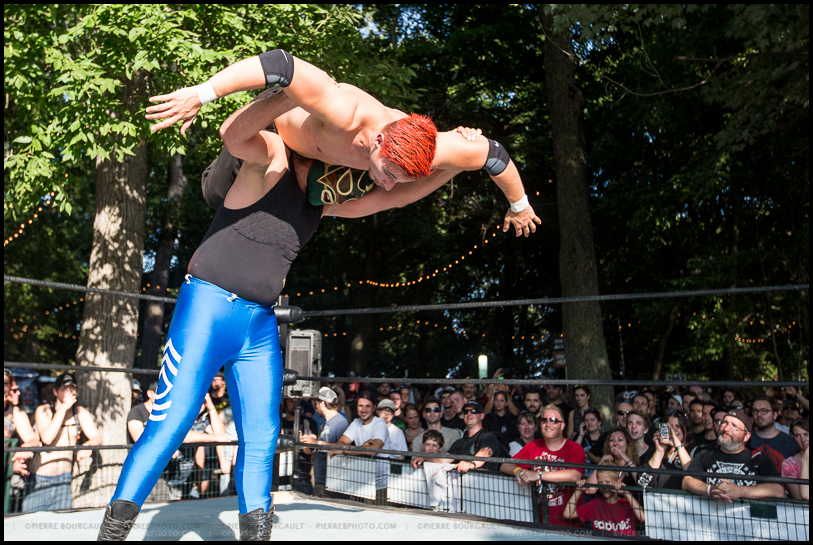 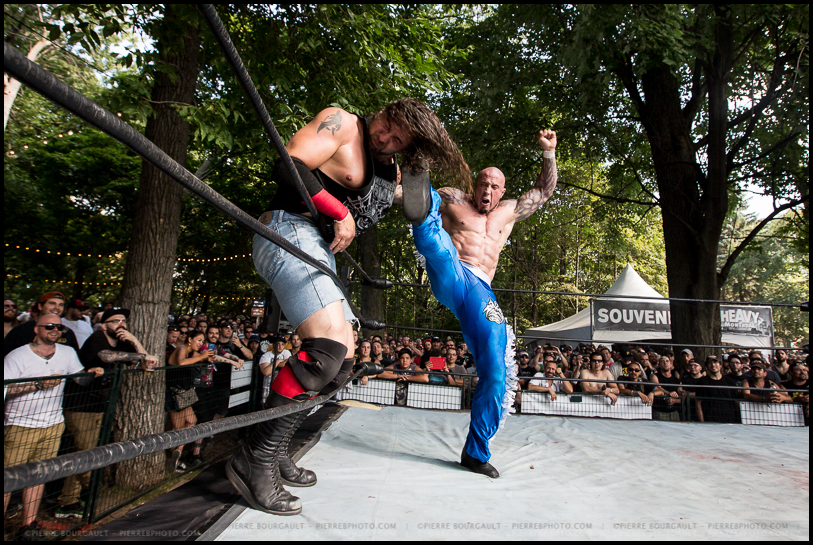 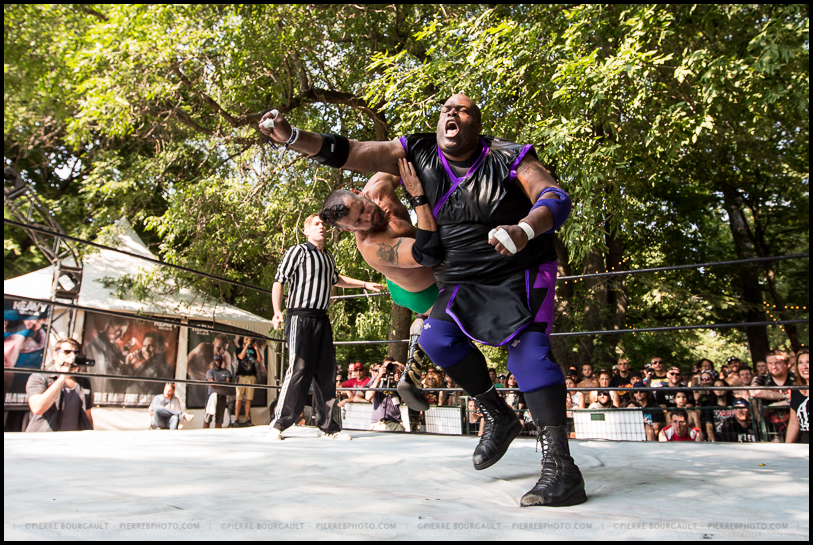 The manager grabbing a leg, foreign objects used on the opponents, double teams.  Heavy Mania had all of that going on! 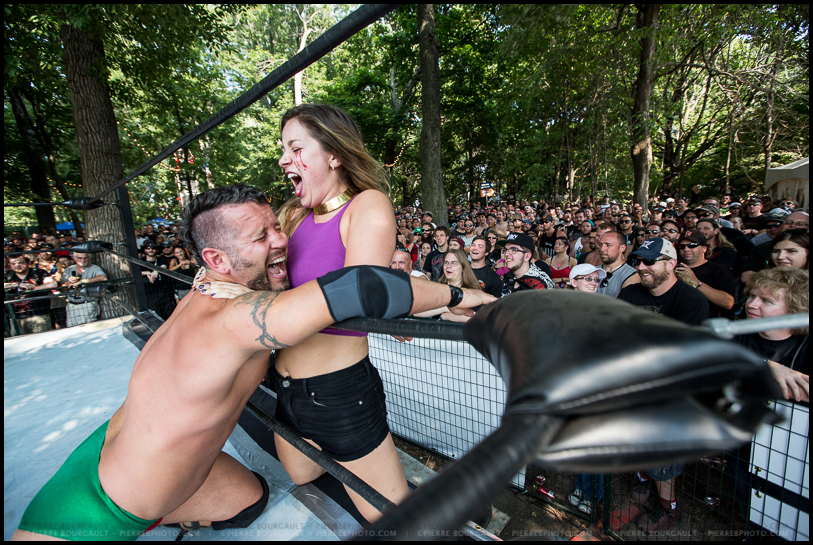 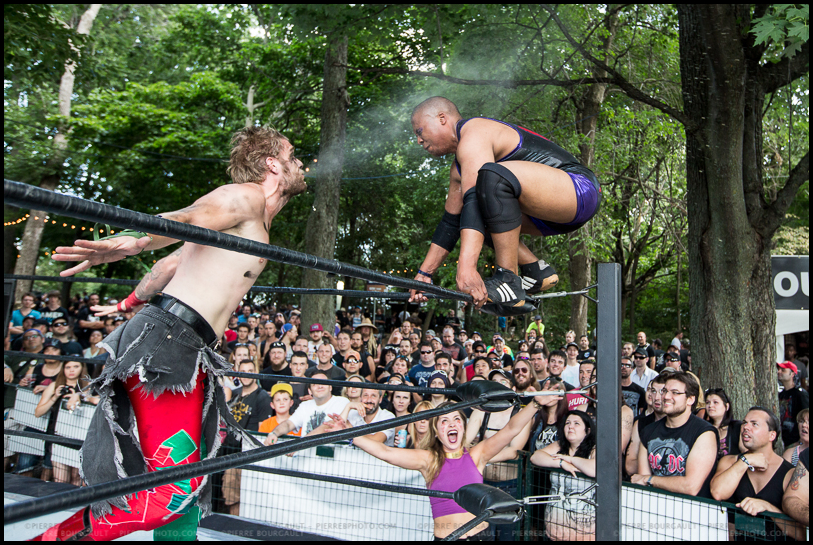 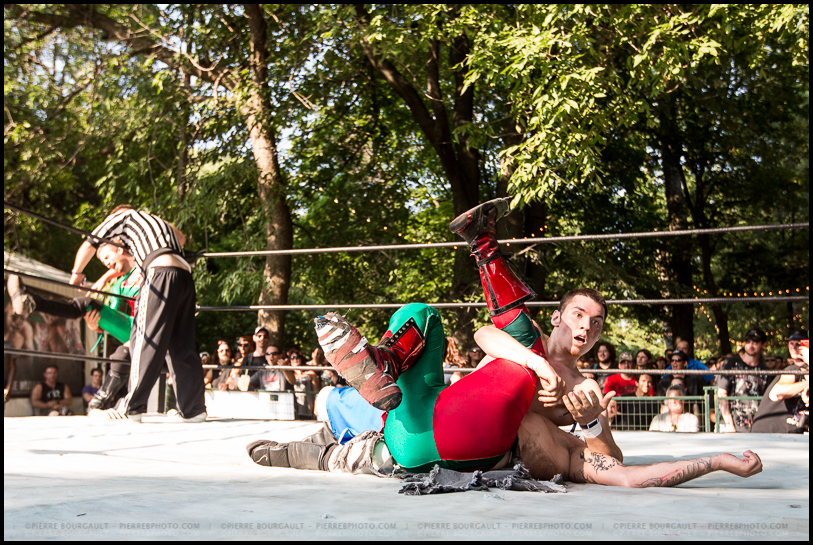 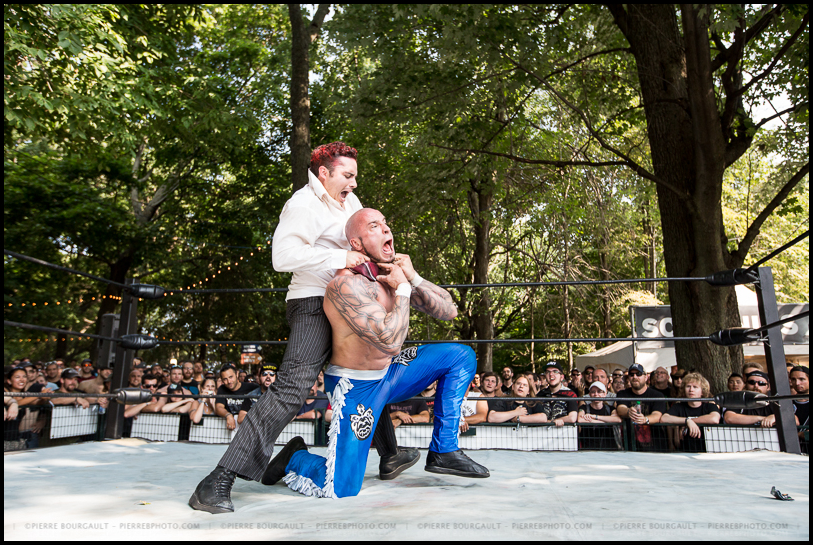 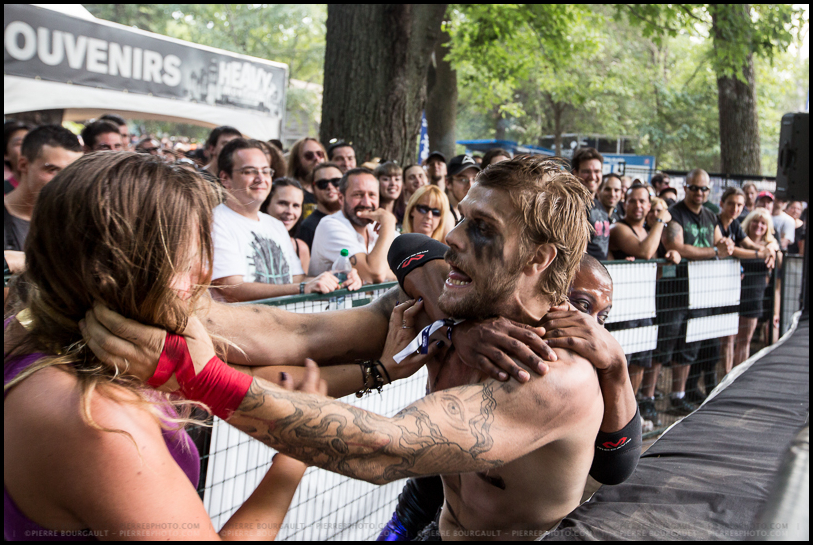 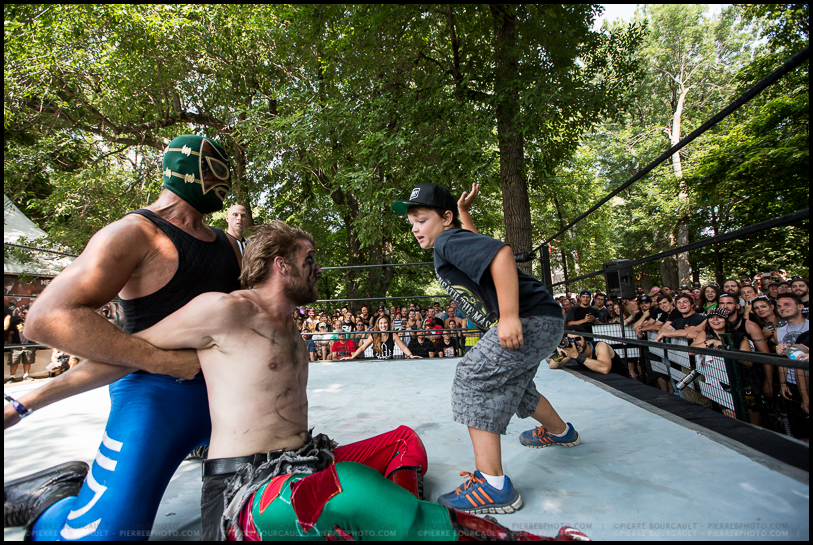 Whether it be the character exaggerating an emotion, the pain of losing a match, feeling energy from the crowd or the rush of a win… 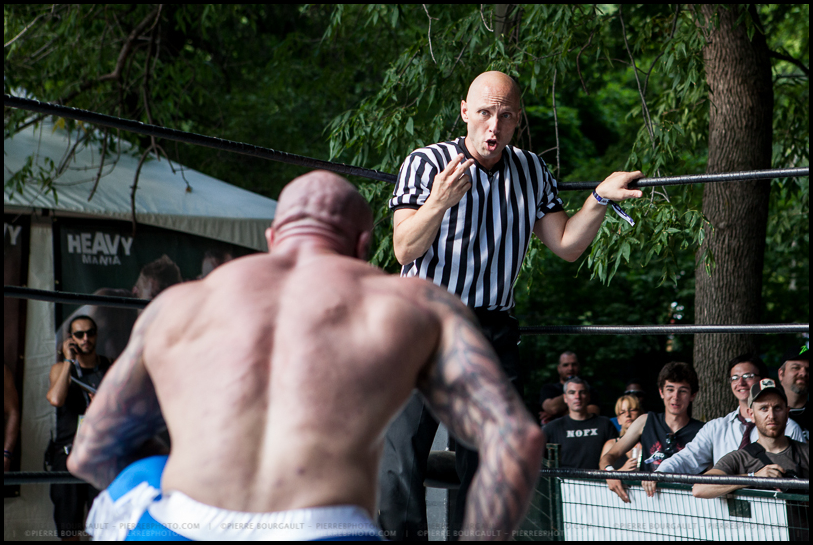 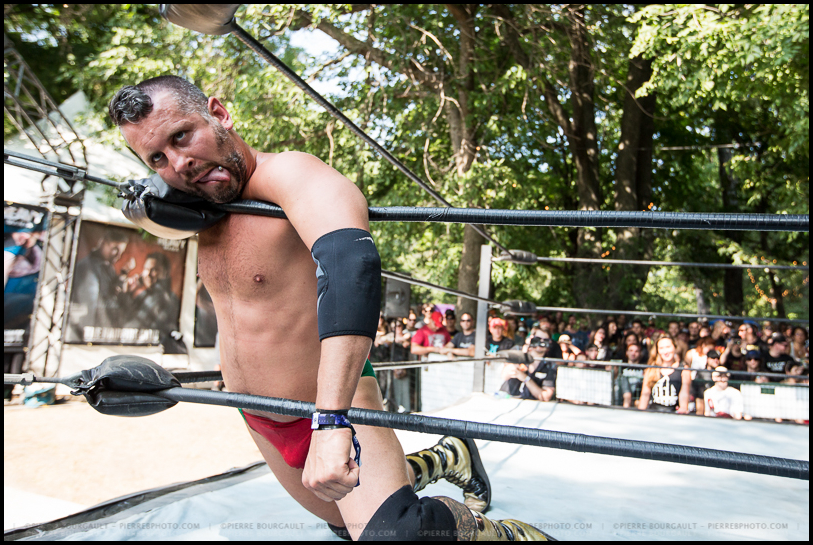 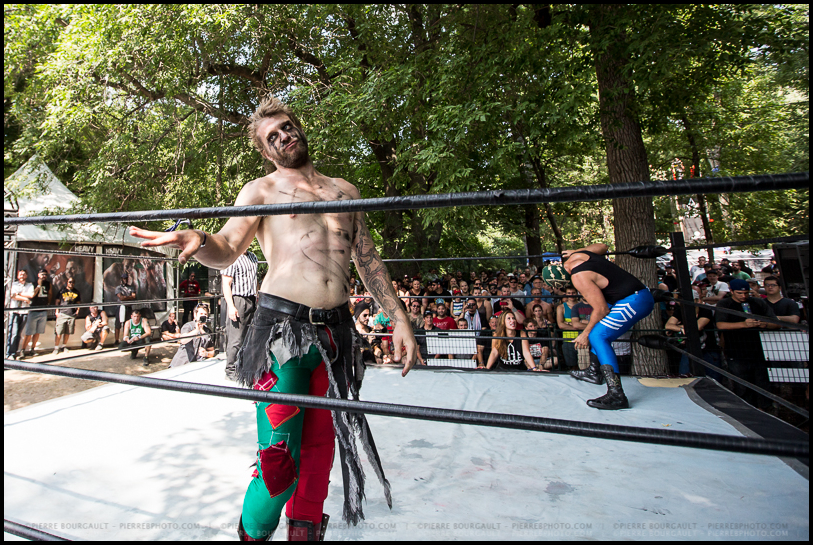 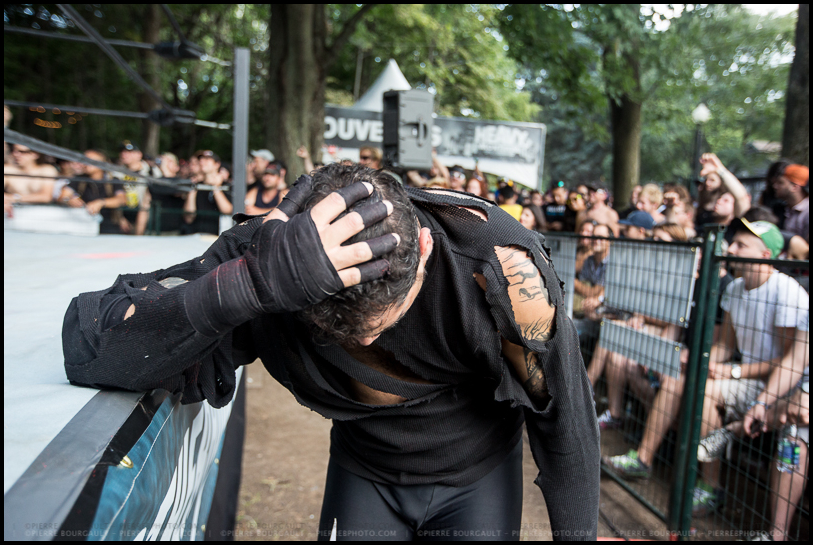 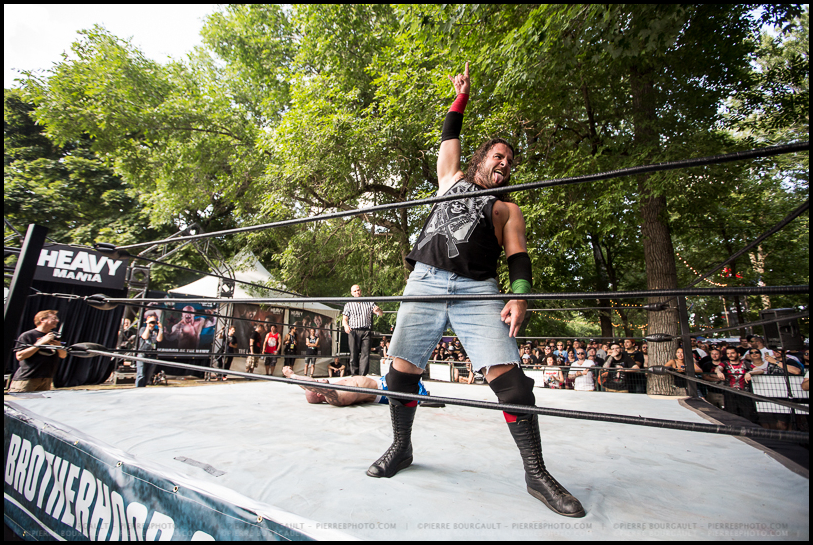 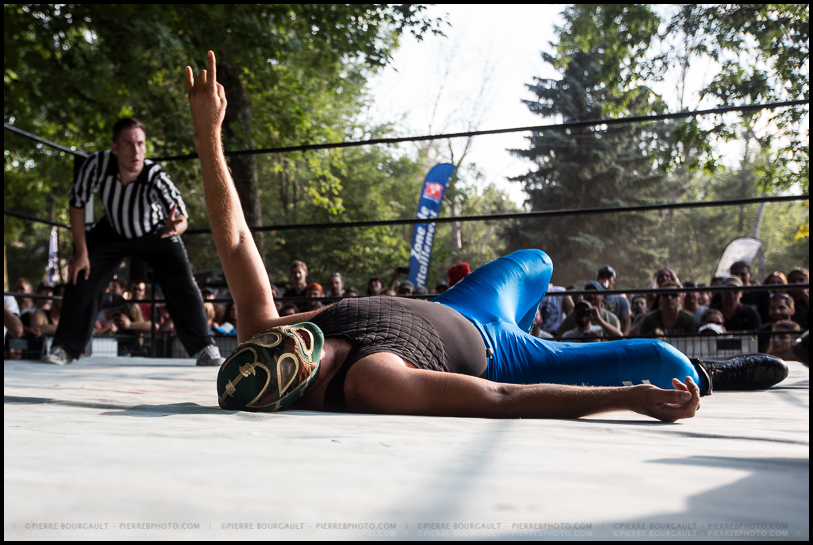 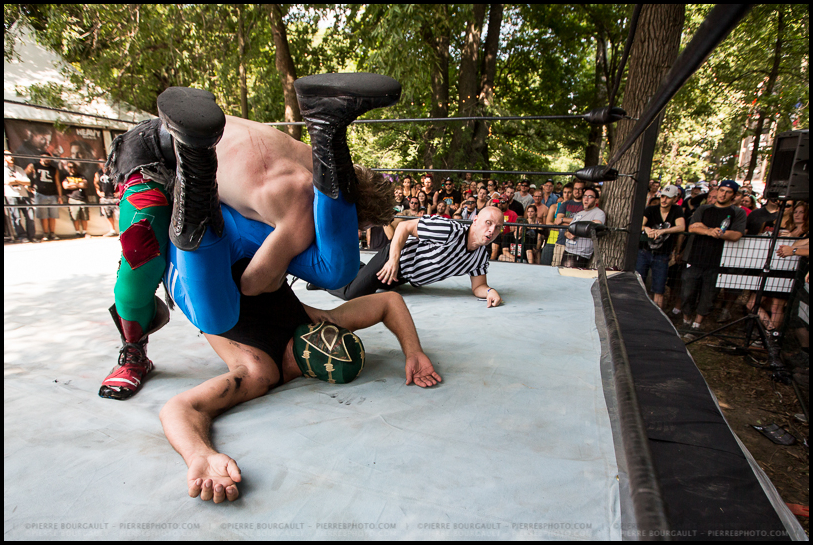 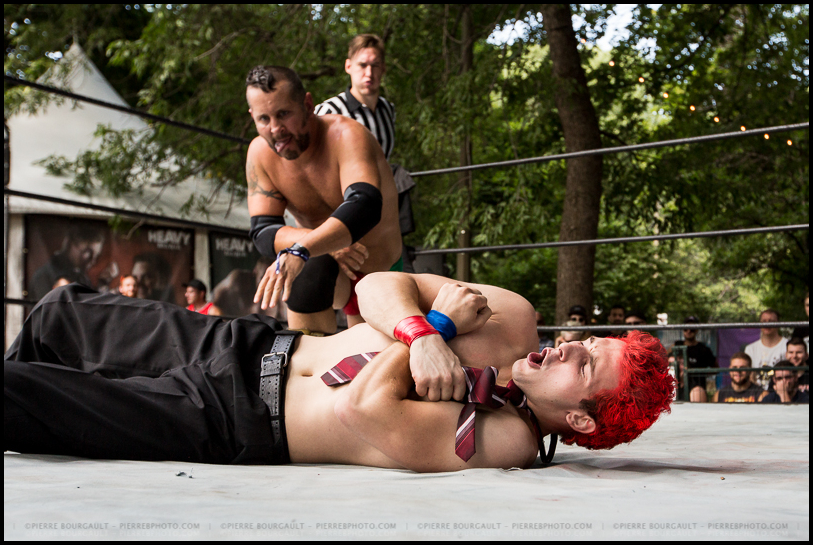 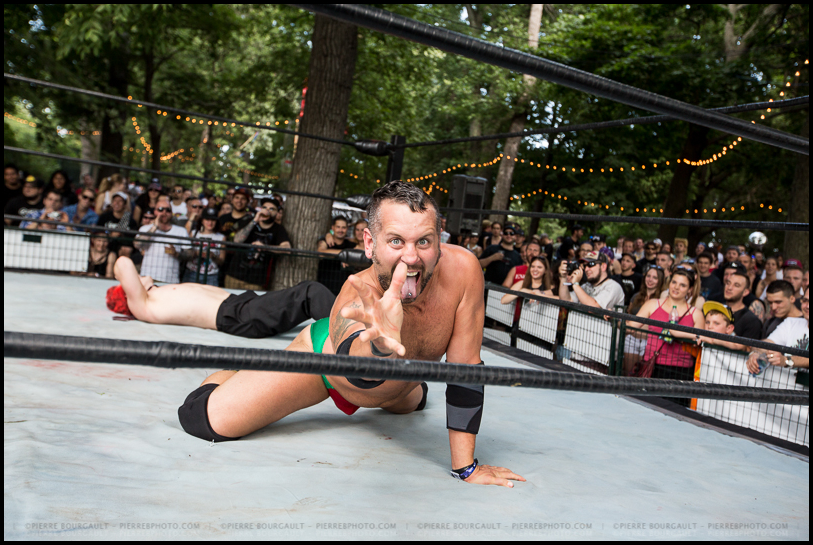 I spread the word to my fellow photographers about how much fun this is to shoot and was happy to see a bunch of them show up during the weekend.  Just as to make a good show, the wrestlers need to be fully invested in what they do, so does the photographer.  Being as close as possible to the action is key.  As is committing yourself to what you are shooting.  I was told I should just shoot for 3-4 minutes, get some shots, and then go shoot bands!!  Hell no.  I’m hired to do a job, I’m going to do it to the best of my ability, even if the “cool” factor of being in the photo pit in front of the biggest metal bands isn’t as high 😉