Another person to brave the public image critiques (all for the sake of seeing things differently and getting better) is Jonathan.  A hobbyist photographer, he sent me 5 pretty different images.

Because I am a sucker for little details and firmly believe that the small details are what make an image stand out from the norm, the cut off fingers really annoy me in this one.   With runners, it is harder to get that right shot and not cut off limbs, specially when they raise their hands up like this.  As he mentioned in his email, this was done at the last second while the runner (who he knows) was coming by.  The intention of using a wide angle is a great idea, but it wasn’t wide enough to get the whole hand.

The composition is a little bit off as well.  When you have someone’s profile, you usually want to have them with their back closer to the edge of the frame and not their face.  For this image, having her more to the left would give the viewer the impression that she is running through the frame and not stuck at the edge about to leave the frame.  Like all “rules”, you need to know them before you break them.

Very nice black and white tones in the image!!   What can I say, I’m a huge fan of contrast. 🙂  This is a candid shot taken during an evening of hanging out with friends.  The look on his face is interesting, like he is into a conversation.  It tells a story.  I like!  And where his gaze is going towards is kind of what I was saying with the first photo where the person is too far to the right of the frame.  His gaze is going towards the empty area of the frame, which is really nice.  Having him more on the left side would make the image seem too cut and tight.

I don’t have much constructive critique to give as I’m really digging the image.  The background is nice and blurry (due to shooting at f/1.8 on a 50mm lens – which is such an awesome lens for portraits!!).  The issue I often see with shooting at f/1.8 is that the subject’s eye’s won’t be in focus as the depth of field is so shallow.  Which is not the case here.

My only comment would be that I’d maybe like to see more of the body.  The image is a bit too much head, but really, it still works.  Try not to cut your subjects off at any limbs (at the knee, elbow… neck!).  It can sometimes give a floating head feel.  But all in all, a great candid capture with exceptional black and white tones

3. Edge of the World

Very cool title with the image.  It does give a feel like the skier is right at the edge.  The muted tones of the snowy day are a nice contrast to the red of the jacket.  Shooting with the colour red is tricky as the colour is very powerful and will draw the viewers eye.  Works totally fine here, but if you are shooting a family and one person has a red shirt, people’s eyes will be drawn to that.

In terms of lines and composition, the buildings are leaning a bit to the left.  I like how the person standing is vertical (duh, as most people who stand are vertical), and think with straight buidings, it would be improved.  I’m also not digging the darker lamp post on the right hand side.  Composing a bit differently to get that out would give a better feel to Edge of the World.

I did some quick editing in Lightroom to show what I mean.  I simply cropped the image and straightened the buildings.  I also upped the overall exposure just a tad to bring out some details in the buildings.  Just because I wanted to 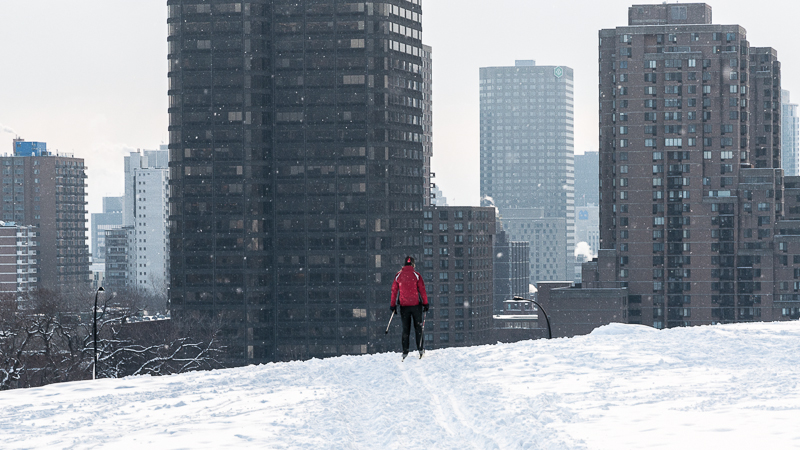 I like how the horizon line is placed on the bottom third of the frame.  However, the tall building being cut is a bit distracting.  Getting lower down, closer to the ski tracks and shooting a bit upwards (keeping the horizon on the lower third) might give the image a feel of being a bit grander, to go with the title.  Using those ski tracks as leading lines to the skier would work as well.

Overall though, as the skier was just about to go down the path, a nicely done quick shot taken.

Awww… look at the birdyyy!  I’m not a pro with animal shots, but I do like this one.  The overall composition in the frame is good, having the bird on the bottom right third is a great choice that goes with the bird’s gaze that is leading off into the distance.  I might like to be zoomed in to the bird a bit more, keeping the overall composition and that diagonal branch that helps frame the subject.

The mix of colours is really nice and keeping a series of trees in the background helps fill the frame with elements that help tell the story.  I like how there are varying levels of branches, from far back/really blurry to closer up/somewhat blurry to clear and crisp.

The one thing that sticks out though are the berries (or whatever they are) right behind the bird.  They kind of mix in with the bird’s head.  Moving slightly to your right to have the head in an emptier space of the frame (with no berries behind it) would help isolate the subject’s head.  We have to be mindful of our backgrounds and not have distracting elements around.

The good?  I like how the various musicians kind of have a leading line, from front to back, with focus on the person the most in the front.  Although I’m thinking the focus is on the second person and not the first.

When doing such leading lines when you have multiple people in the photo, you need to pay attention to have each person in the frame.  The guy on the left side of the frame is cut.  Speaking of cut, the top of the closest musicians instrument is cut as well.  The subject of the photo being Contrebasses, you should aim to not cut part of the main subject.  So shooting a tide wider would have both the top part of the instrument and the guy on the left included in the frame… and the musician’s hand as well.  You can’t always get all hands in there when shooting many people, but you need to at least try and get the main person’s who is in focus.

Now Jonathan mentioned that he didn’t shoot too much during the show as classical music and constant shutters don’t really go together.  Good on ya for respecting both the artists and the fans there!  A few extra shots to get could of been having more of the instruments, again, to go with the subject of the photo.  This would ensure that the hands and bows are not cut.

While I think the leading line created by the musicians works, I think moving more to the left to get more of a straight on shot could also work here.  But sometimes, you need to work with the space you have.

So there ya go!  Hope this is interesting and gets you thinking on some different shots and angles to take when you are out and about shooting!

If you would like some images reviewed, feel free to send me a collection of 5 images, in a decent quality please 🙂

*All images are copyright by their owners, please do not use or reproduce without permission*