I received a set of images from Chantal, a photographer I know and have shot a few shows with in Montreal.  Was fun to see her jump on board with the image critiques!  Merci! 🙂 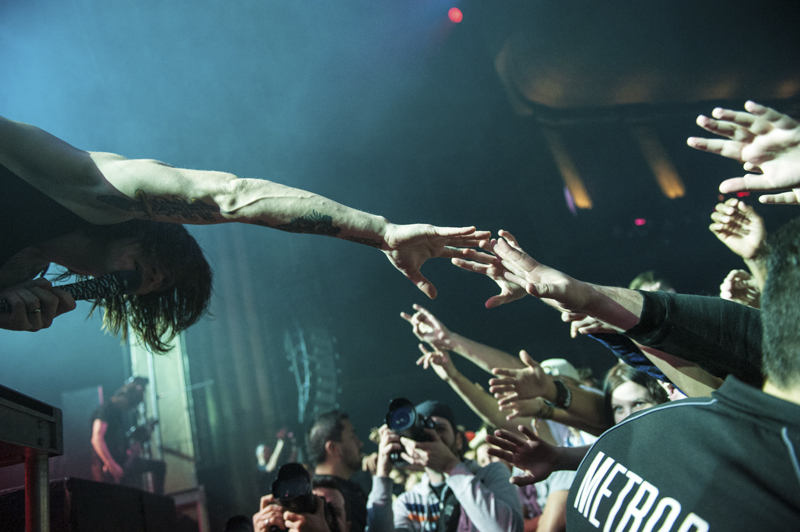 I like this image.  It’s not perfect, but as part of a full set for a show, it is pretty solid.  I love seeing more than just bands on a stage, seeing the crowd interactions really tells the story of the show.

I know show images are often about having a half second to take the image and we sometimes have to settle with what we get, which is the case for this image.  Having the security guy on the lower right of the frame hurts the image.  I see the fan’s eyes right behind his shoulder and it would of added to the image seeing her full face.  While I’m not a fan of cropping outside of my normal image ratio, going with a more panoramic crop would help minimize the impact of having the security guy there… taking a bit off the top, a bit off the bottom.  Something along the lines of a Facebook cover image (851 x 315).

Not sure what the image looked like a few seconds before or after, but I’m thinking you got the better end of the image than the two photographers in the frame, who are shooting the back of his head.  Getting a face in there is always key.  His face looks grainier than the rest, probably due to him being less light and maybe some processing done to lighten the face?

Getting under the singer when he is reaching out with a very wide angle lens could of been an interesting composition.  Although by the time you’d move there, the moment would be gone. 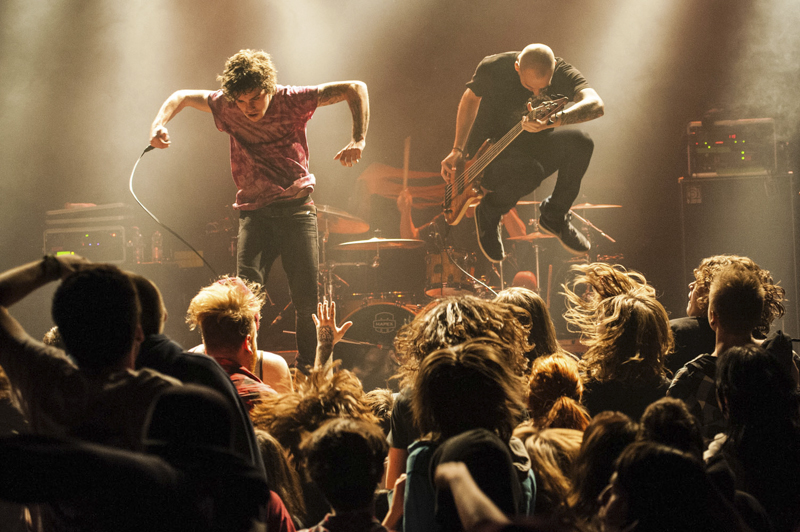 This I like.  Probably my fave of the 5 images sent in.  Love the crowd in the bottom part of the frame, all packed in, very representative of what shows like this are like.  The fan holding her hand up, the one with the hair flying… gives interesting elements to look at.  The light coming from the top adds a nice rim to the band’s heads and back.  Elements that keep me looking at a photo = good

While having the composition tight like this gives a boxed in feel (which is good), I think I would of shot just a bit wider.  I find the heads of the artists are a bit too tight on the top.  And while shooting wider, I’d keep the elbow of the fan on the left, which is currently cut off.  In crowd shots, you will have something cut off for sure… but when it’s an arm bent like this, it is a little too obvious of a cut.  Minor detail, but still one that sticks out for me.

The bassist has some nice height going.  The singer, kind of looks like he is about to fall off a cliff.  Not sure how high his jump was (or if he was jumping or just hopping), but the way he looks adds a somewhat comical feel to the image.

I would add a bit of contrast in the image, as I find it’s lacking a bit on the stage, due to the smoke and light setup.  Makes the band members look flat.  I’d also cool the white balance some to get rid of some of the yellow from the lights and make skin tones a bit closer to reality.  Not much, just a bit.  Personal taste. 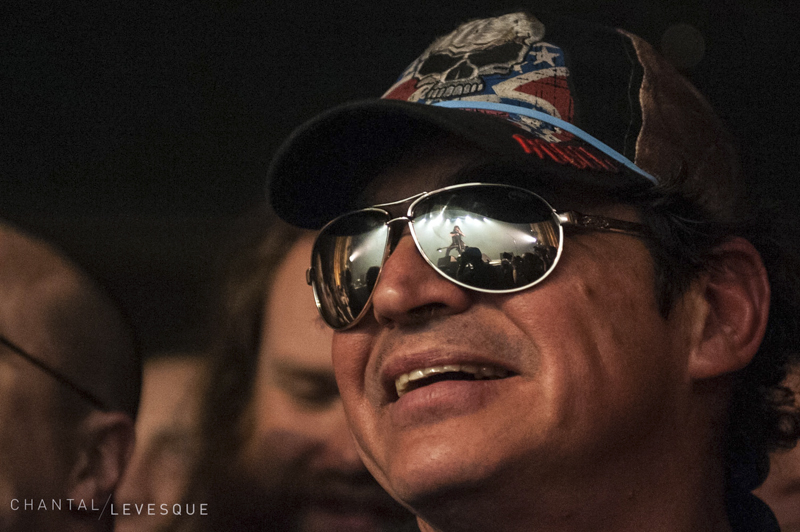 hehe, reflection in glasses!  Love it 🙂

The shot is an in between shot for me.  It’s not close enough for me to put my attention on what’s happening IN the reflection, and it’s too close to make it a portrait.

too close -> just because it’s a show doesn’t mean that basic portraiture should be ignored.  Cutting someone’s portrait off at the limbs (knee, elbow, neck) is a no no.  Makes him look like a floating head.  So backing up / shooting wider to get some of the shoulders makes a more compelling portrait

too far -> One personal rule I live by is make the subject of your image fill your frame.  If the subject is the reflection, get closer in there and make it obvious!  I’d think cropping in as tightly to cut off his chin, ear and part of the hat (keeping some hat 😉 ) would put more emphasis on the reflection.   It’s touchy with the composition as to what to keep in… I’d think keeping his mouth in would be a must, but then again, seeing the mouth draws my eye to it… 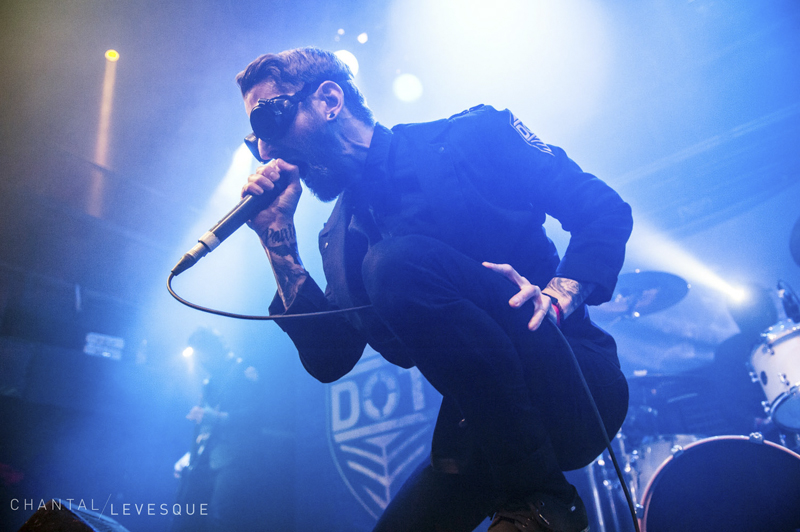 Now this is cool… because I was shooting the same show 😉

HUGE props on taking the image from the side… the singer tends to have his mic over his mouth, making shots from the front not very pleasing.  If there is one thing I think is very amateur is “mic mouth” … where the mic fully (or mostly) covers the singer’s mouth.  Sure, there are some situations where it works (intensity in the eyes, magic moment), but 95% of the time, it doesn’t.  Slightly moving to the sides helps so much.  The voice is a singer’s instrument, so why cut it off?  Well done!

I like the image for the intensity in his face… you caught him in a powerful moment in his singing, great job.

The light was pretty horrible, and the band LOVES smoke a weeee bit too much, making contrast and even focus a pain to nail.

The composition is missing a few points though.  His foot is up on the monitor, visible, so why is it cut?  I’m probably the biggest offender in cutting off obvious feet, but it is something to be avoided… the devil is in the details.  I find his body is a little too much in the middle of the frame, empty space on either side.  Moving him more to the right of the frame would work better I think.

If I couldn’t get wide enough to get his full foot in I’d probably crop / shoot this a bit tighter to focus in on his expression!  Cropping from the bottom right to about his mid shin.  Keeping care not to cut the DOT in the back.  This would also remove some empty space in the back.  His face would be centered, but his body would be to the right. 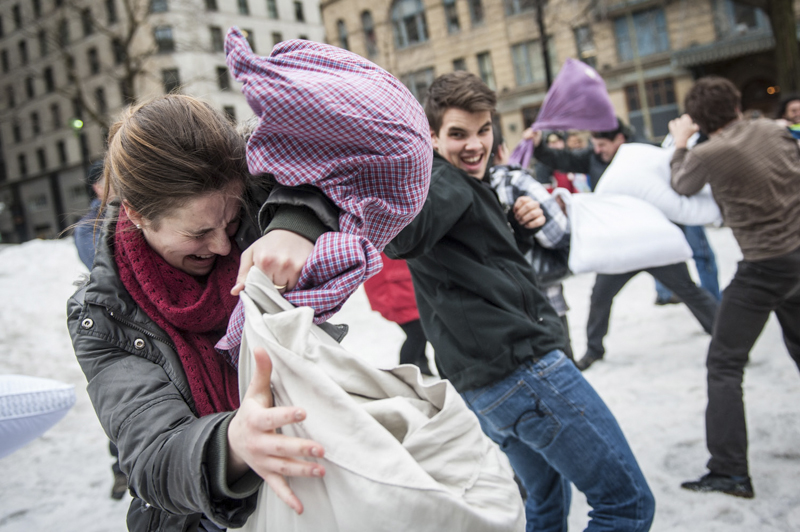 Cute image!  I like how we see the guy hitting’s face with his triumphant smile.  My first impression was to get in closer on the two people, but I think I prefer this wider shot where we see the others also in the pillow fight.  Gives the impression that it’s really a gathering of people instead of just a couple hitting each other with a pillow.  Maybe a sliiiiight crop from the right, while also straightening the horizon somewhat in the photo.  I don’t mind slightly tilted photos, but I feel too many people tilt (and often way too much) as a way to make a photo more dynamic than it is.

I’m also thinking a little contrast would make the girl in the front pop a bit more.  What can I say, I’m a fan of contrast. 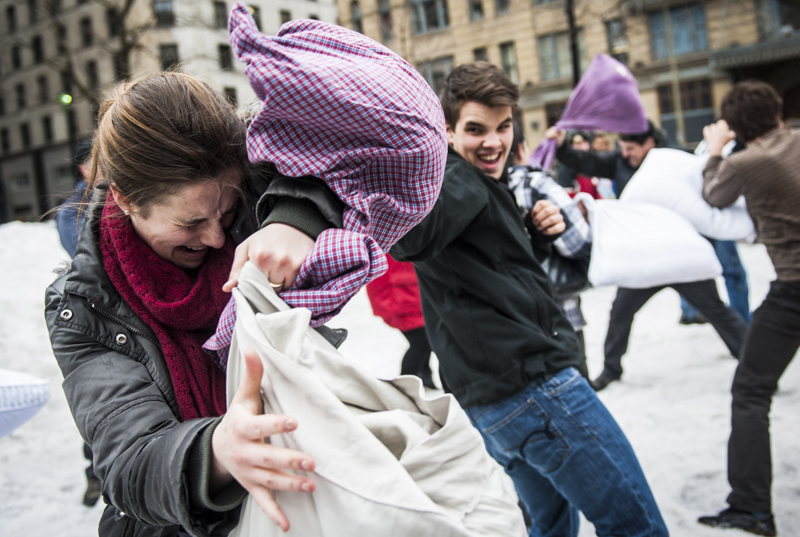 Thanks for sending in your images!
If anyone else would like to have images critiqued, send me a set of 5 good quality images.
*All images are copyright by their owners and used with permission*