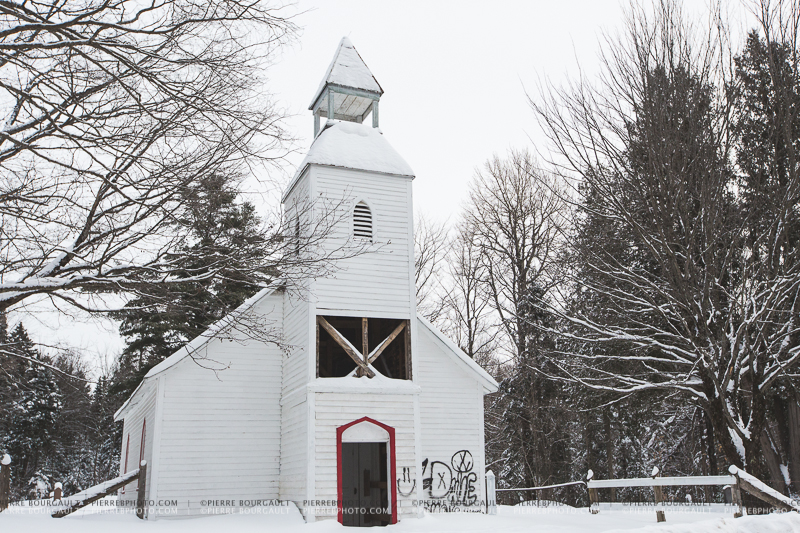 While researching places to go exploring in the country side, my girlfriend found this little church a little over an hour north of Montreal. I believe she had found it on some ghost hunter website and there were rumours of it being haunted as there was a mass suicide that happened in the church (I haven’t been able to find any information on this though).

So on a -38C day, instead of being all cozy and comfy watching a movie at home, we decided to suit up and go check it out.

After driving on some small roads and not seeing any sign of life, we came upon the little church, sitting right by the side of the road. 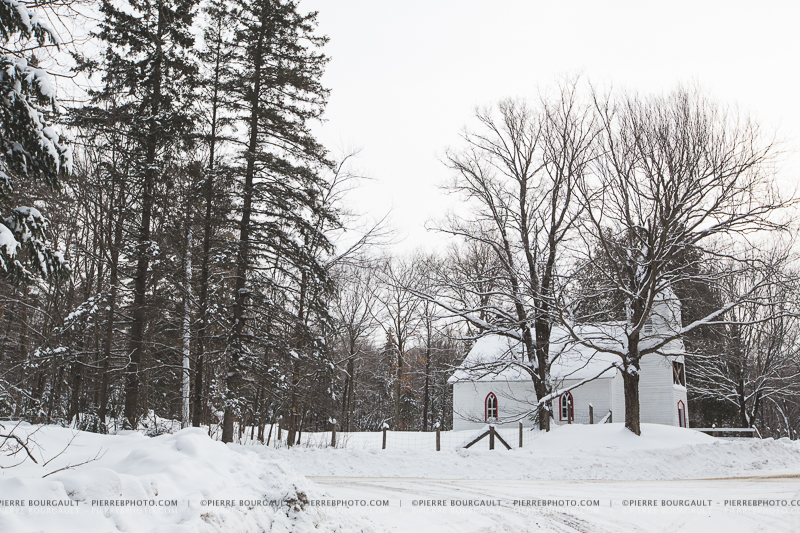 The snow was knee deep at times, and with the extremely cold weather, we didn’t get a chance to check out the cemetery in the back and kept out exploration short. The church is very small, one room with no original furniture. What do you expect from a church built in 1858! 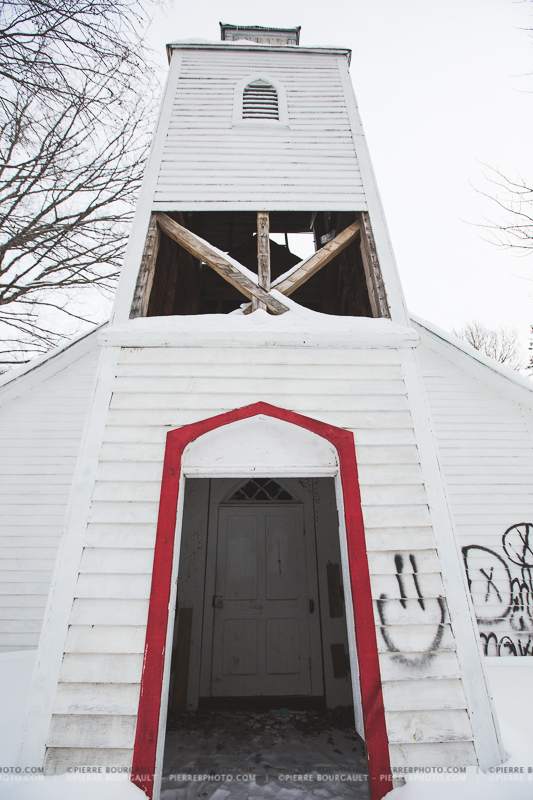 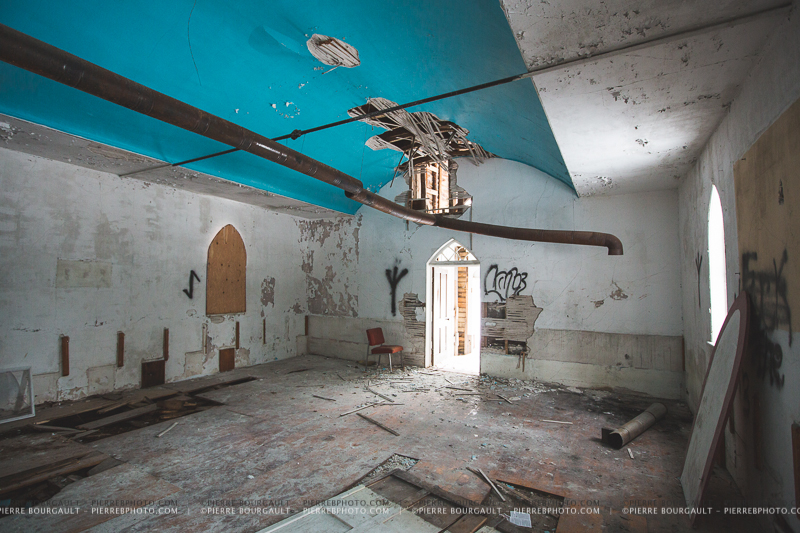 I read up a bit more on the church and thought it had a really cool story dating from the first settlers to arrive in the region. It’s called St. John’s church and is in the now gone town of Shrewsbury. The town’s first settlers, who originated from Ireland, arrived in the 1830s and many of the original inhabitants are buried in back of the church. The town was thriving at some point, with mainly agricultural products (potash) and lumber.

By 1915, the town had half the population it had at it’s peak in 1891. With the developping ski industry in places like Morin Heights, bigger cities were being formed around Shrewsbury, which led to the creation of real cities with bigger city centres. The train made for a quicker commute to these cities. The small village of Shrewsbury, which was a 2 day walk to Montreal, started to be abandoned, with the forest taking over where the town once stood.

Some of the original homes are still there, although they have been renovated and are currently lived in. Most of the homes are gone.

Pretty funny how I felt like I learned more of the areas history that will stick with me more than I ever did in school books. I’m sure many of the founding settlers can be traced to surrounding towns, but having seen where they first set up, even if all that is left is this little lonely church, was pretty cool. 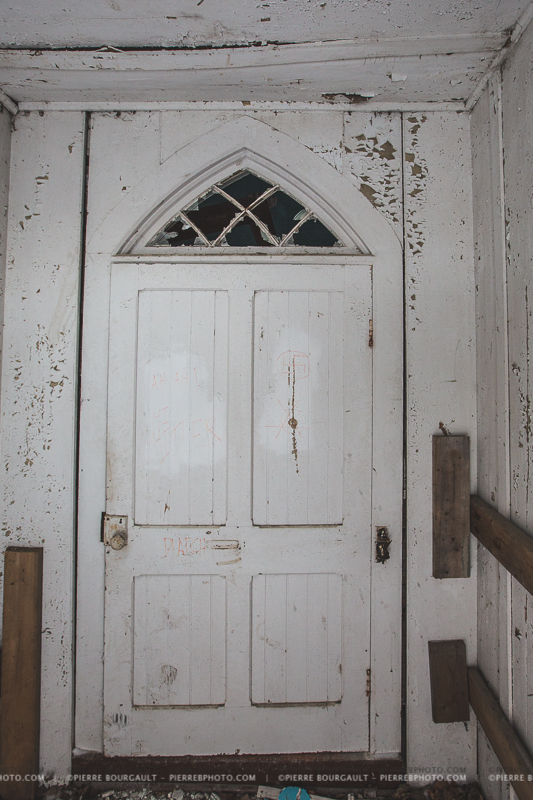 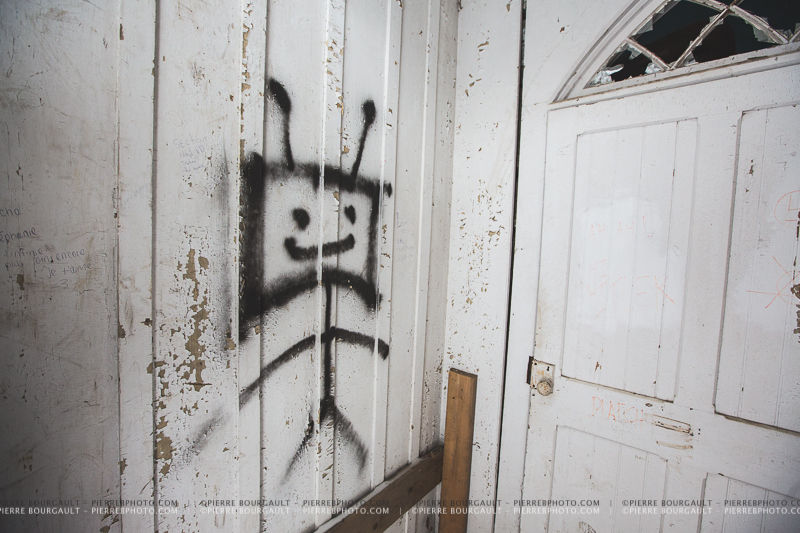 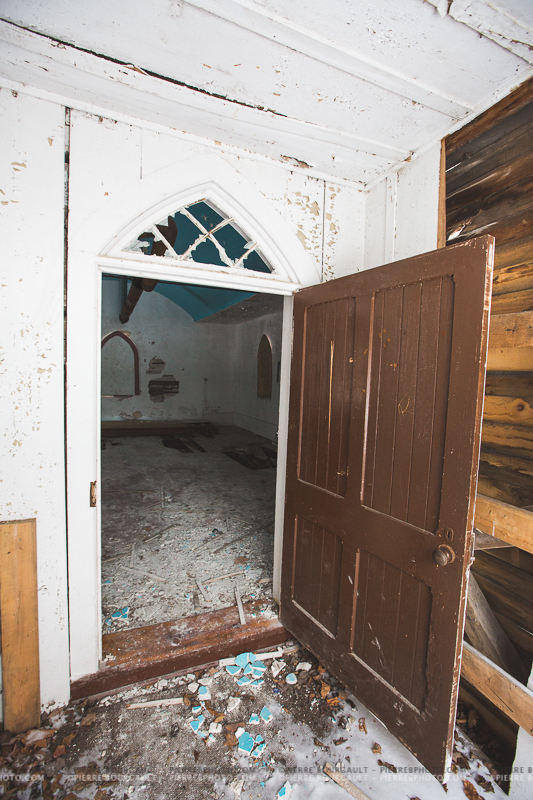 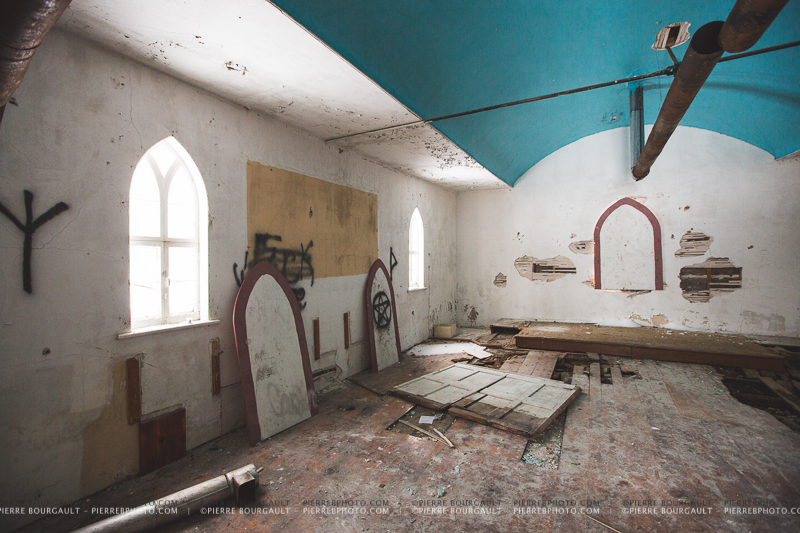 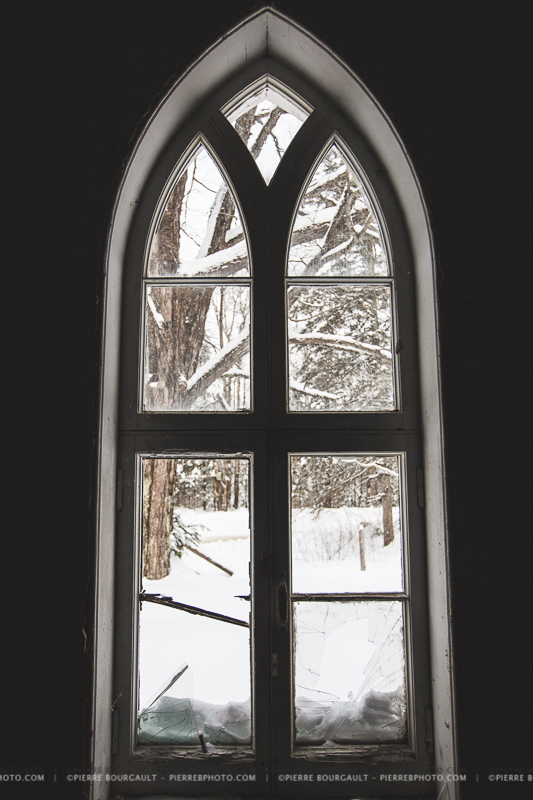 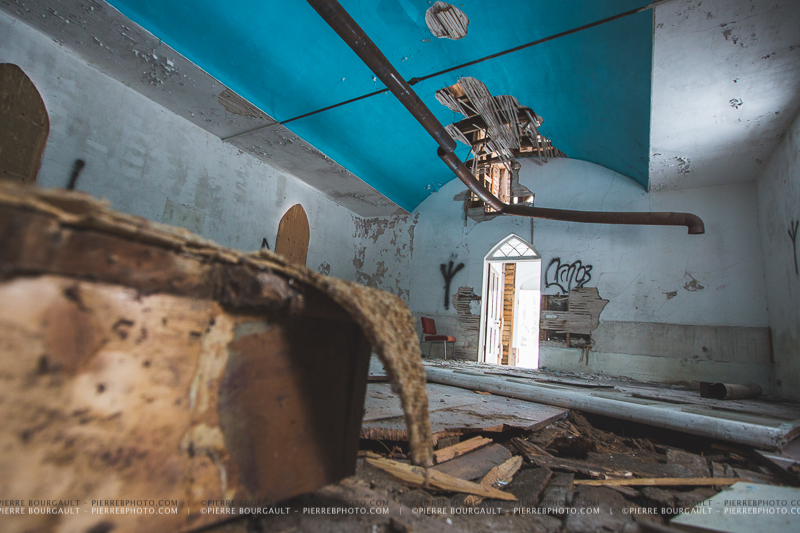 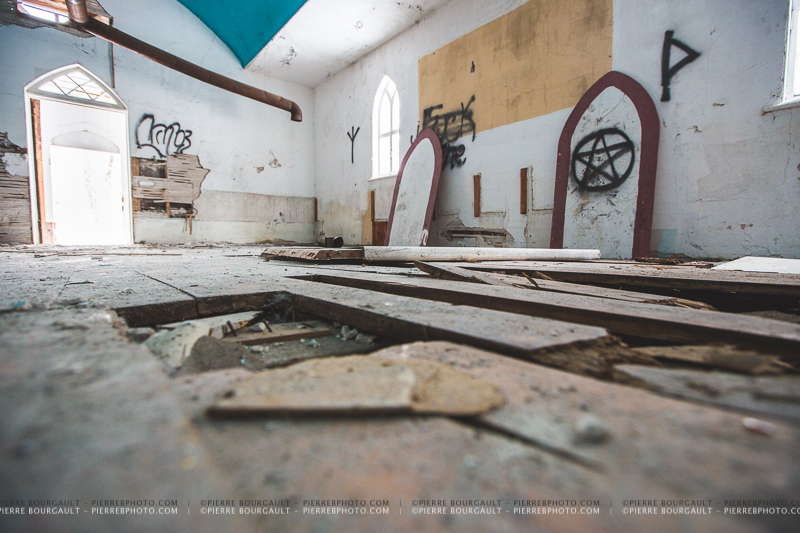 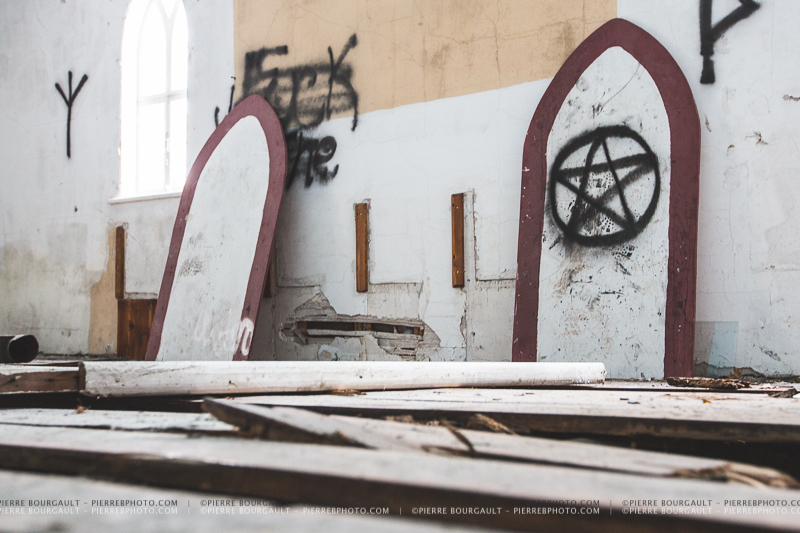 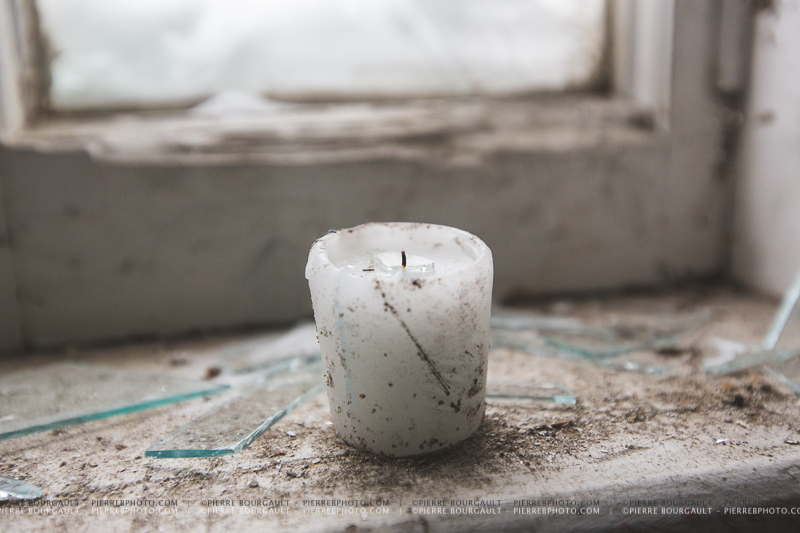 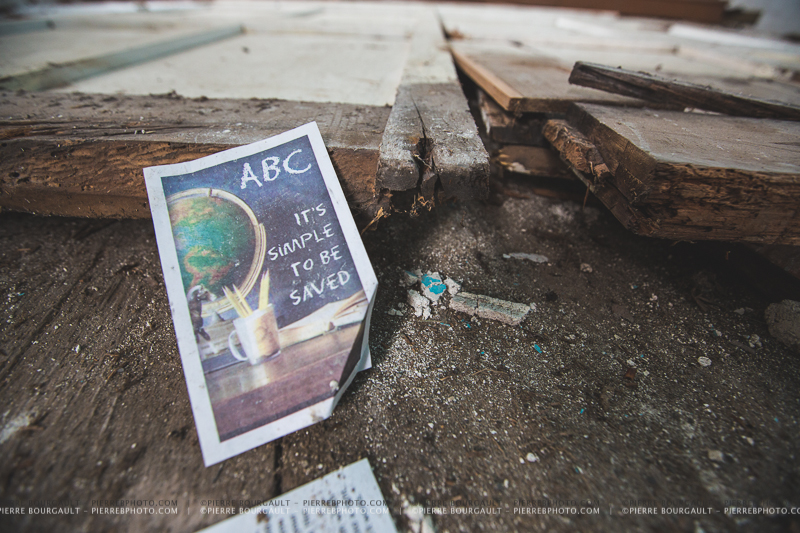 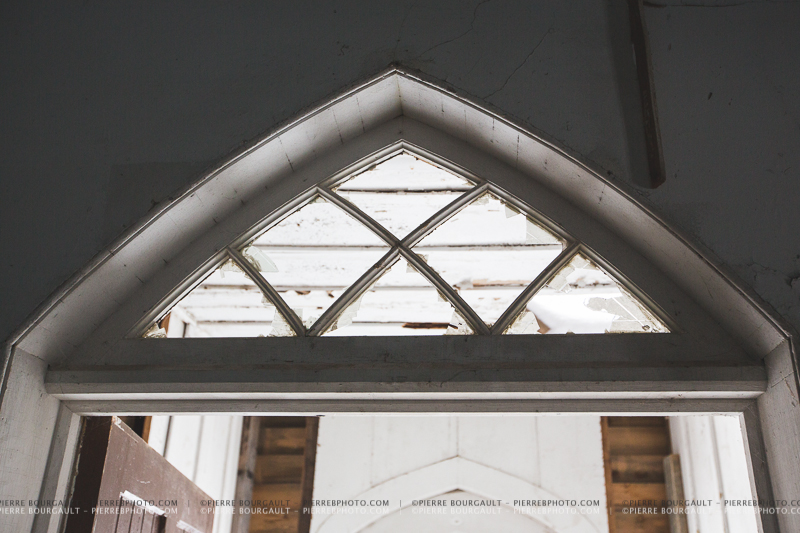 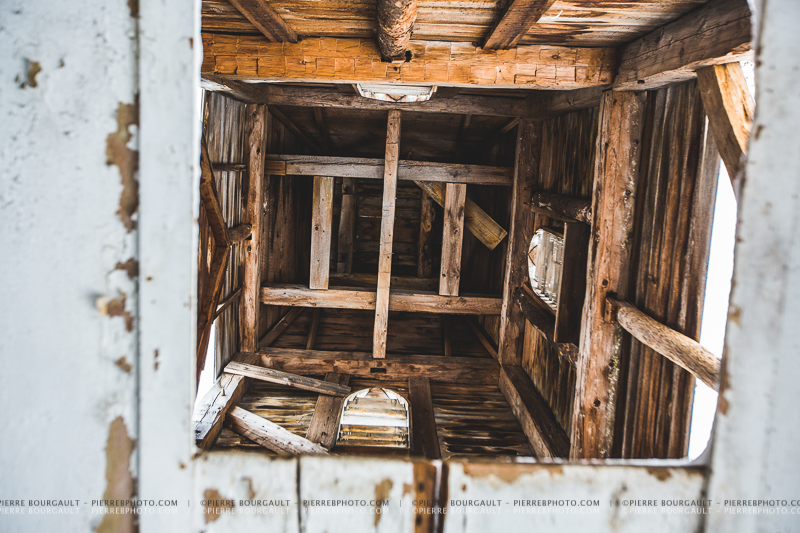 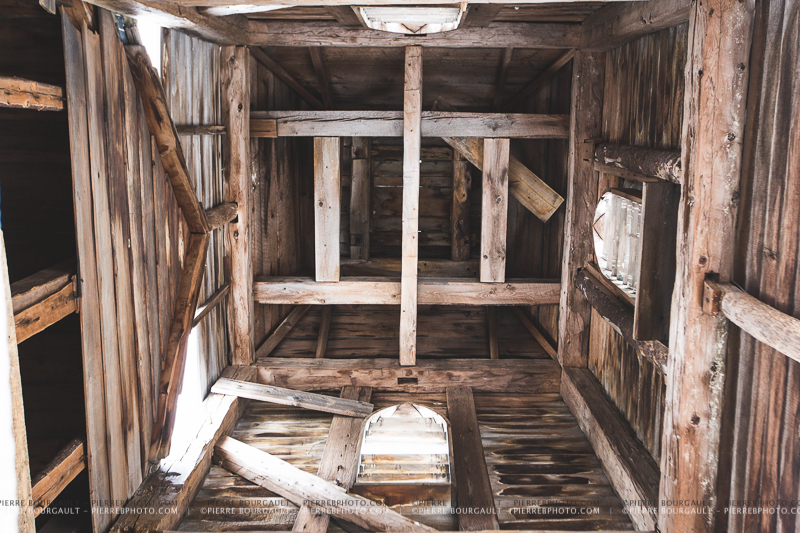 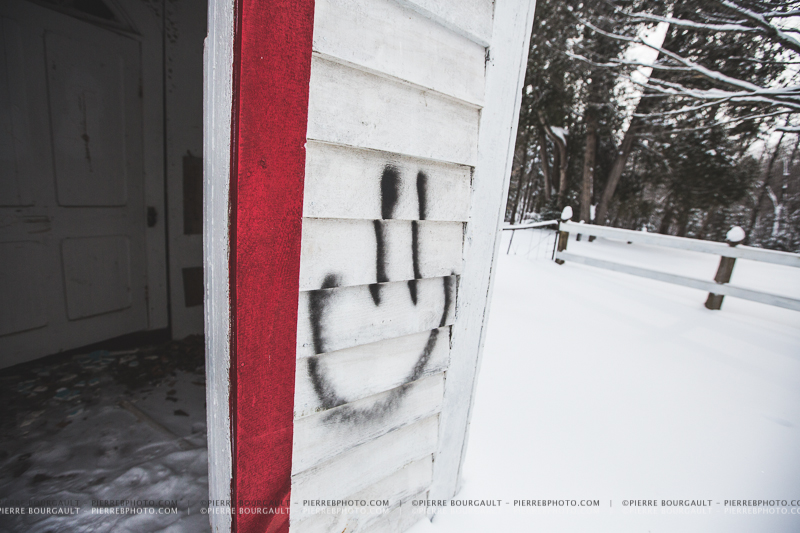 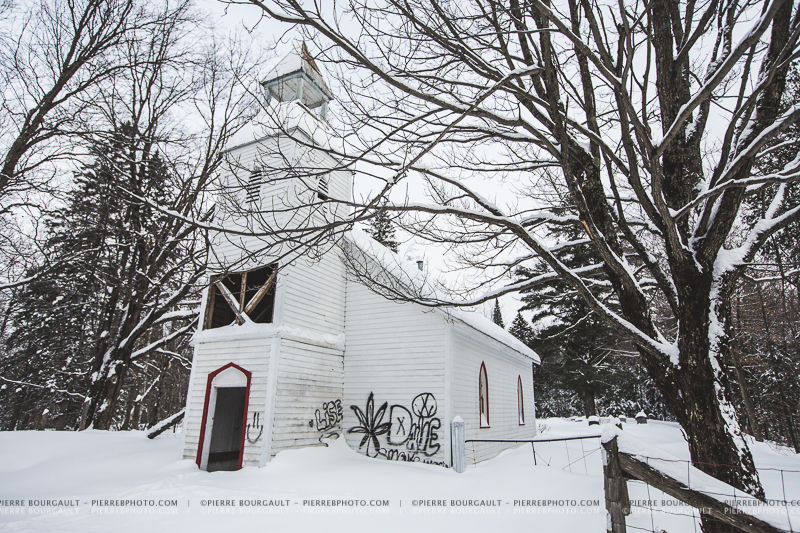 Pretty cool glimpse into the past I must say.  It was pretty damn cold outside so I only brought with me one dSLR and used only 1 lens.  No way was I going to change lenses in this cold.  Seeing the outside of the church, I knew it was going to be pretty small, so I used a 16-35mm lens on my Canon 5D Mark III.  My trusty Fuji x100S had the day off.  The lens is a great lens for small spaces.  I personally love the 35mm range (which is what I have on my Fuji) but I get the added benefit of going ultra wide at 16mm.

TIP: I had a half charged battery in the camera and a second one stored in an inside pocket of my jacket.  If you go out shooting in the cold, keeping a second battery warm is a great idea as the cold tends to kill batteries.  When one seems to die, replace it and put the “dead” one in the inside pocket for it to warm up.  Hopefully by the time the new one dies, the old one is warmed up again.  Thankfully my battery didn’t die 🙂