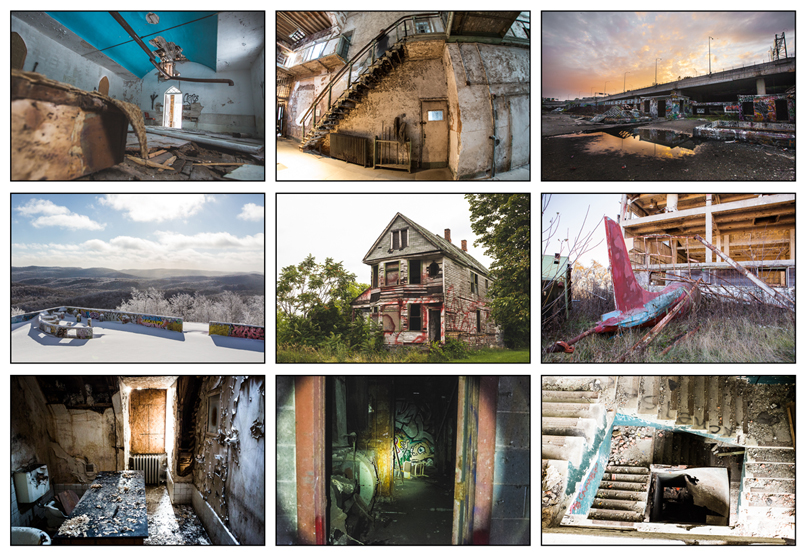 It seems that every time I post an image of an old farm house, abandoned factory or a long forgotten mansion, I get a few emails asking me where the place is.

Many people who do urban exploration have issues with giving out locations and access points.  Why?  It’s not because we don’t want to share, it is because if the word gets out, then the place will start to fill up with the “unwanted”.  Vandals.  People who destroy things.

It is a pretty big issue with urbex here in North America.  It seems the Europeans don’t have the same issues with people destroying places, they have more respect and leave things intact.  Which is what real urbexers do.  We find a place, explore it, and leave it as is.  Some take snapshots, some make awesome photos, some are just happy with the find.

Some of these places have particular ways to get in.  If the neighbors start to see too many people hanging around, the cops are called and these entrances are sealed up, ruining it for everyone.  That’s the reason for the secrecy.  I may personally know you and trust you, but I don’t know your friends.  I don’t know who else will know.  I do share with some people, but these are people I know are doing it for fun and won’t spread the word around too freely.

So how do I find these places?  I’m rarely told of a place.  It’s all about searching.  And in this day and age with all the online resources we have, you can find some amazing things if you want to spend the time looking.  But these technological times and great access to information have made people lazy.  If it’s not available in 10 seconds, we move on.  If it’s not obvious, we go somewhere else.  How many times have I closed a browser while searching for something because the page is too long to load?  Way too many.

You have to follow blogs, facebook pages, instagrams, twitters and other places to get inspired.  You also have to think outside the box and imagine places to visit… “there must of been an old stable somewhere if they are building a new one…”.  The idea to find places doesn’t just pop up in your brain (although it might, and if it does, let me know haha)

Take this photo from Instagram user @jfsavaria.  He’s a guy I’ve been following for a while who posts cool finds and in some of the finds he has posted, the insides of old city buses.  After months of seeing his shots posted, I said I wanted to find the place. 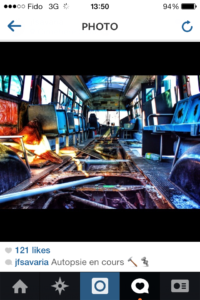 We all use google.  We all love google.  It has helped us find restaurants, cheap flights, pictures of cats.  I don’t really remember a time pre-google, like the world didn’t exist… ok, that’s a bit far, but it’s the best tool to find places.  Seriously, when I tell you to Google it, I mean it.  Because that’s what I do. 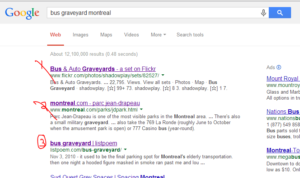 First link in my googling, not much but a few images.  Second link… not really relevant.  But third link… now we are getting somewhere!  It can take digging 3-4 pages deep in your google search to find something worth while.  It can also take dozens of google searches to find something relevant.  Patience is key.  It’s not usually on the first click that you get amazingly relevant information.

So following my third link above to the website http://listpoem.com/bus-graveyard/ , I found a hint of where it might be.  No, there wasn’t text saying “Go check it out at 123 xyz street”.  The site doesn’t have much text, and only 3 images.  But in one of them, they had a pretty unique building and a water tower in the background.  I kept googling, but couldn’t find anything more interesting.

So I went back to Step 2 and started googling Montreal water towers, but this time, went with google images instead of just websites.

And before long, I found that the building with the water tower is the St-Lawrence Warehouse that is located on Van Horne, an icon of Montreal’s Mile End (and maybe a new place to go explore hahaha).  Once you have a building name, getting the address is pretty easy.  35 Van Horne Street, Montreal, QC.  Gotcha

Alrighty… I have a general area where the graveyard might be based off the warehouse.  But instead of randomly driving or walking in the area (which I sometimes do), let’s see if we can narrow it down… If I go back and look at the photo with the two people on the bus, I see that the warehouse has a pretty distinctive facade… it’s not just a rectangular building.  Aaaaaaand part of the weird facade is showing in the photo, giving me a general direction of where they are.  Next stop… CSI Montreal!

Yep yep… now that we have the address of the warehouse, let’s find that odd face side on google earth.  Sure, you can probably zoom in really tight and see the shape of the building in regular google, and confirm using google street to see, but hey, any reason to use google earth is a good reason.

Ahhh ha!  now we have a better idea of where the graveyard is.

But let’s see if we can virtually tour around and get an even better idea with google street!  Judging by the distance of the people and the warehouse, It’s probably a few blocks away.  Let’s hop in the google car and take a drive.

After a bit of driving, looking left, looking right, changing streets, getting lost (yep, I ever get lost driving virtual cars), I manage to get here!  There is a building right near with a series of rectangular windows (shown by the arrow below) which is also a backdrop for the image I found on the website!

We always have an excuse not to go…. it’s cold outside, it’s far, I’m tired, I’m hungover, …. but really, there is no better time than the present.  I took photos of an old church and 2 weeks later some vandals burnt it to the ground.

With the information in hand, we decided to take a drive and go explore!  We didn’t use a GPS at first and we got turned around a bit. But the cool thing about being turned around, we found another totally abandoned building we went to explore another day!

So yep, we drove and drove and finally I was able to snap this shot with my iphone (tilt and approximate crop to match the google images)

I know, right?  Sucks.  But them are the ropes!  I never said that each time we go explore that we manage to:

3- make interesting images… some places end up being boring.

Seriously, did you think I’d give up the actual location of such a cool place?  I guess you didn’t read the start of this post 😉  I know it’s nothing really ground breaking, but finding places isn’t anything new either!  Just takes some time, patience and a bit of imagination.

And yep, we have already explored the other building we found nearby when we got a bit lost, and even spotted another one we plan on checking out.  Haven’t yet found the graveyard, but I’ll keep on digging.