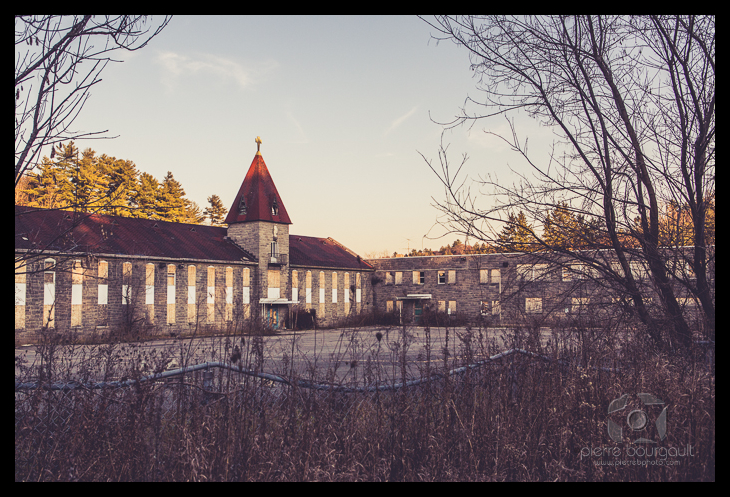 Last weekend, my girlfriend and I decided to get a double dose of urban exploration.  We first hit up an old military heating centre in the south shore of Montreal and then headed north of the island to a place we had been wanting to go for some time… an abandoned manor.

We got there a bit late and had to park the car a ways off and walk to the place as there was no parking around (how odd, right?).  We only had a few hours to check out the place and neither of us had any idea of how massive and how many rooms there were.  We probably checked out a little over half the place.  Most of it was pitch black inside and the only lights we had were our flashlights.  So will definitely be going back to check it out again, now that we know what we are getting into.

A few things about this place… we found a pretty big rat’s nest (no rats, just lots of poop).  Mouse droppings can be toxic (not hugely, but they can be) and if you are prone to allergies you might react.  Plus, rat poo means … rats.  So gotta be a bit careful.  But it stopped us from checking out a certain section of the place.

A bit of history…

Opened in 1795 and was expanded many times over the years.  From the late 1960s to until about 2000, it was used as a high school and a few years after that, was the headquarters for a branch of the provincial police.  It was been mostly abandoned since 2009 and some idiot vandals set fire to one of the original areas.  Seriously.  Idiots.

What was cool about the place was, contrary to what we find in the city, there was a lack of graffiti.  Sure, some on the outside and a few scribbles inside, but generally speaking, the place is pretty clean of wall art.  As it’s old, there are some iffy parts of the floor.  I also tried to get on the roof and my foot slightly sank in a bit, so that was a no go.  Lots of nails and shards of glass around.  But all in all, was a pretty cool find.

So instead of just posting up the images, I decided to flex my totally unused video muscles.  With video, you need a plan before you shoot to make a story.  That I did not have.  I just shot and pieced things together later.  Pretty amateur stuff, but hey, practice makes perfect (or at least it makes less sucky!)

Kind of a quick preview and a few images… there is a lot more to be shot in there!!

And a quick note about urban exploring.  Breaking and entering is usually a criminal offense.  Trespassing laws vary by country and by province (or state).  Read up on your local laws, but always know that local people usually really distrust anyone going on private properties for any reasons.  Be safe. When in doubt…don’t.