On a recent road trip to Detroit, my friends and I found ourselves about an hour out of downtown in East Detroit.  We were heading on foot to the old Packard Motor Plant for some urban shooting (full blog posts on the Plant and on the City coming soooooon!).  On the way, we walked by many abandoned houses that we would stop and take photos of.  To give you a sense of where we were, here is a photo of a house which we called “The Blood House” (yes, we found cute nicknames for the places we visited). 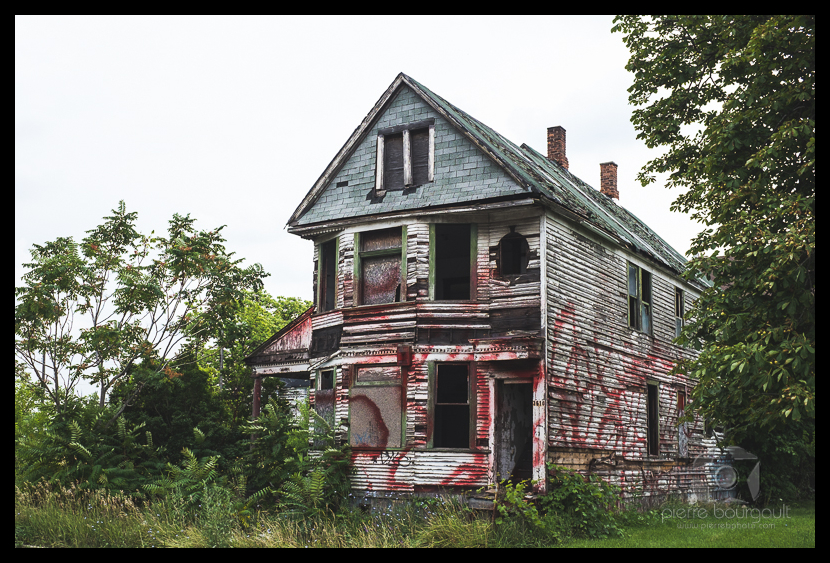 After shooting the Blood House, we were walking down the road and stopped not too far away to shoot an old gas station.  While taking photos, a man came up to us and we started chatting.  Little did we know that this chance encounter would be the highlight of our 3 day photo trip.

“How you guys doing?” was his simple greeting.  After 45 minutes of walking, he was the first person we actually saw.  When you are wandering around unknown cities in unknown areas, you always have to be alert to dangerous situations.  But Damon didn’t give off that vibe.  He was on his way home from work and was curious as to what we were doing.  We chatted for a good 15-20 minutes and he wanted to know what would bring us down from Montreal to take photos of places like this.

“We don’t really have anything like this back home.  It’s part being curious, and part bringing back images that people aren’t used to seeing”.   In the 1930s, Detroit was the fastest growing city in the USA.  Now?  It’s the fastest shrinking city.  Hundreds of thousands of empty homes and lots.  Although 3-4 years ago many of these places were accessible, many no longer are or they have been totally gutted and emptied, most of them no longer accessible.

We got on the topic of freelance photography, shooting urban stuff as he had seen other people around doing similar types of photos.  He then told us that people in the community would love nothing better than to get all this stuff taken down.  They would even be willing to do it themselves, just for the fun of demolition (hell, who doesn’t want to take a sledge hammer to wall!).  Then, as I like to do with people who are true characters that I meet on my trips, I asked if I could take his portrait.

He was reluctant.  See, Damon is a man with pride.  He was dressed in his work clothes and if I was to take his photo, he wanted to look like he does every day.  So I made a deal with him.  A few quick photos at the old gas station and then he can head home, change, and we’ll meet up in an hour or so to take more photos of him dressed in his day to day clothes.  I had the “working man vs every day man” idea in my mind.  And to my surprise, he was totally into it! 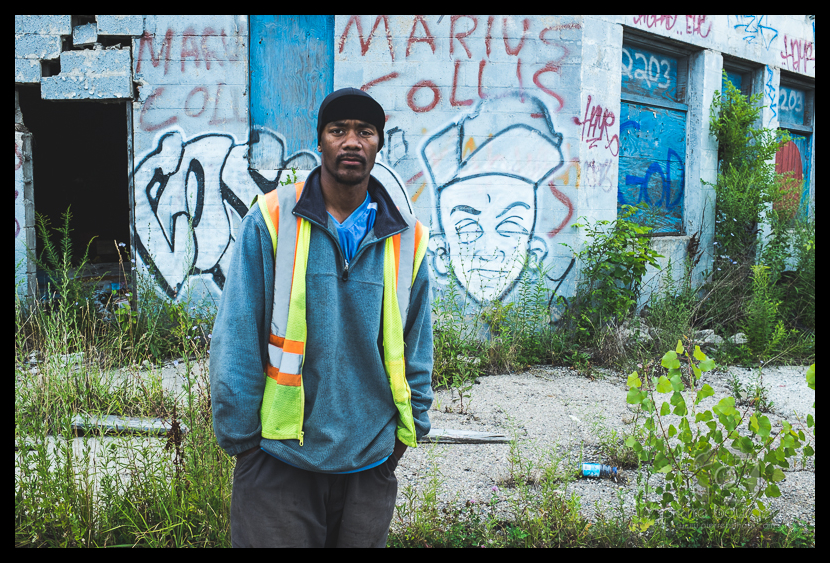 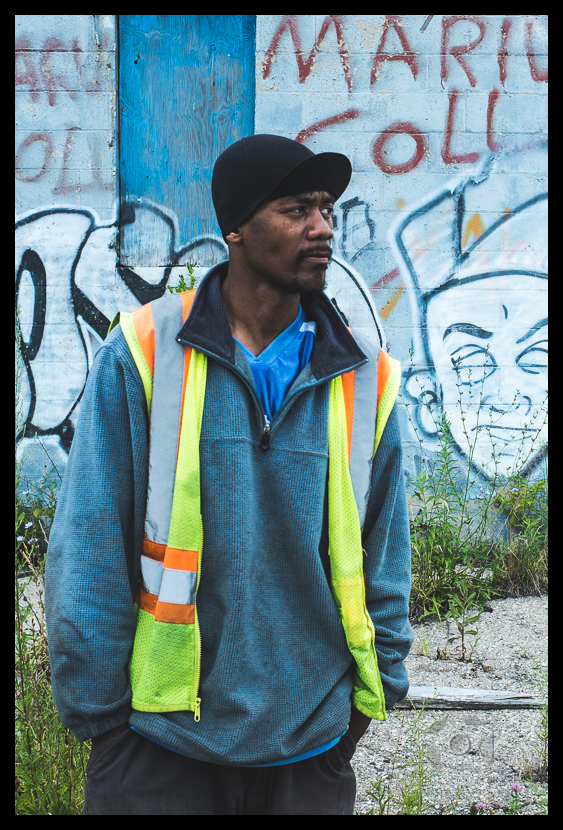 He told us to meet him in a little over an hour at a nearby fast food place.  He looked me square in the eyes and said “Pierre, I’m a man of my word.  If I tell you I’ll be there, I’ll be there.  Don’t make me go home and shower and come meet you all and you aren’t there”.  We shook on it and agreed that we’d wait for him until 2:00 pm.  But after that, we had to get going as we had to reach the Motor Plant before nightfall as no way I was going to venture around there at night.  I gave him my number so he could text/call me.

So we walked to the fast food place.  And waited.  Oh, and I ate cookies.

At 1:57 pm, my phone rings.  It’s Damon.  He’s heading out the door and is actually going to grab a cab (he felt bad he was running late) to come meet us.  “Go on towards where you guys are going, and I’ll catch up with you!”.

And as he said he was a man of his word… he did catch up with us…. showered, changed and looking classy.  Ready for more photos. 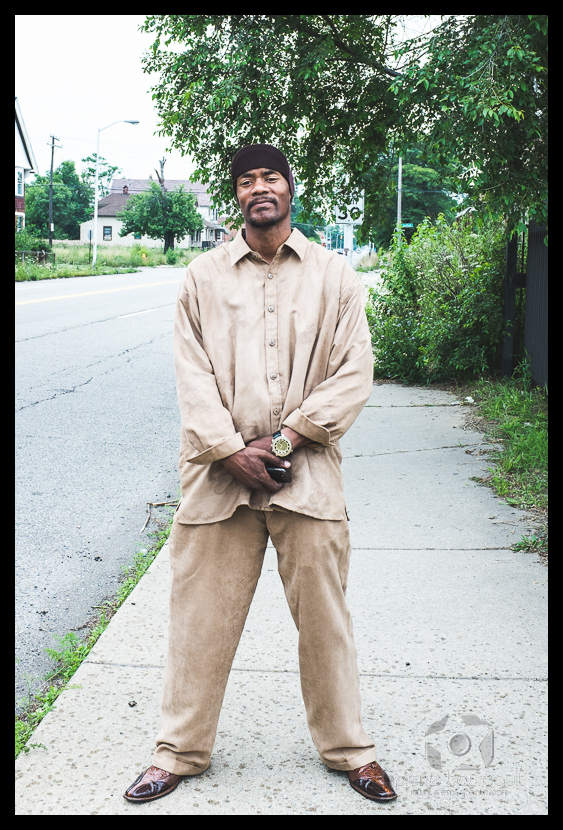 It had started to rain and the sky was getting dark.  As we were doing the photos, Damon told me the story of his mother.  You know, there are moments when you connect with someone?  This was one of them.  Damon’s mother passed in late 2011.  She told him that she wanted him to dress nice, like a man, as he was always wearing baggy jeans and over sized t-shirts.  And so, from that day on, he made sure that he was well dressed.  It hit home with me as my dad passed a few months before his mom.  And that was one of the driving factors to me quitting my job to do photography.  Parents can always inspire us to do things, even when they are no longer with us.

Now the first thing I noticed (and I know you’ll all laugh because of my supposed shoe fetish) were his shoes!  Loved them!  So, in true Pierre fashion, I got down and snapped a photo of his shoes, and the totally amazing socks! 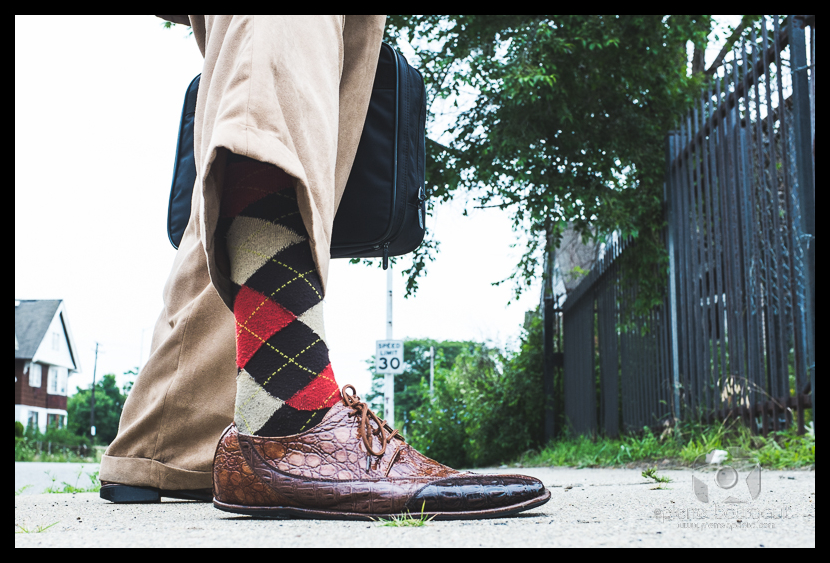 I’m all about the details.  He said that shoes and watches were his thing.  Every man has a thing. 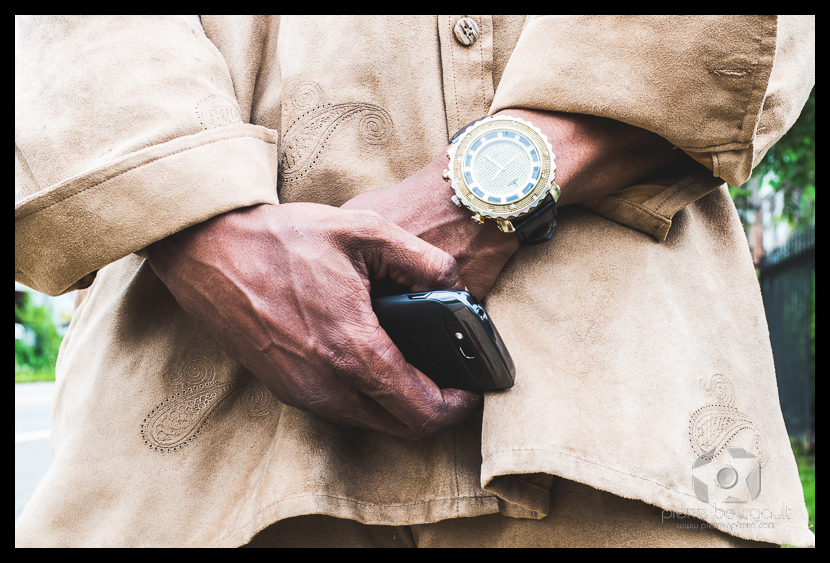 And as the rain started to come down, we had time for another portrait. 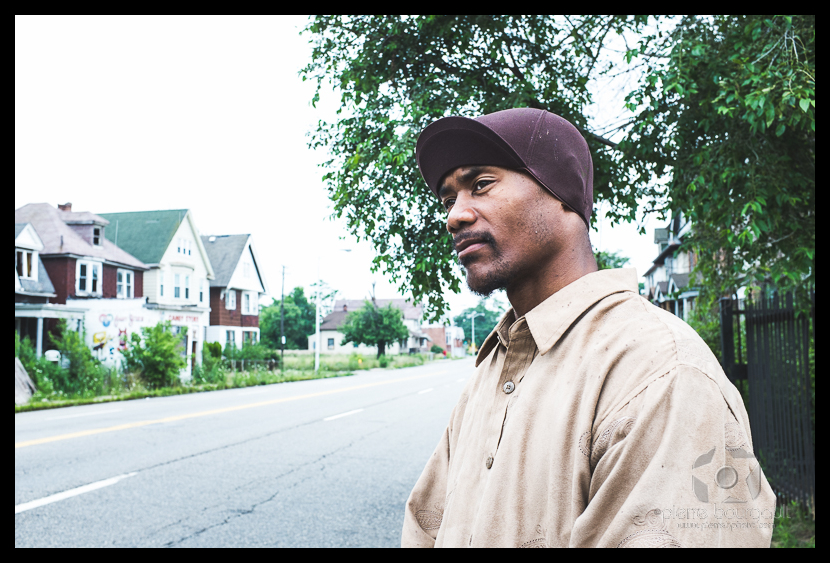 He was going to head back down and get some food.  I asked him what else he would be doing.  “Well, if it wasn’t raining, I’d probably go down by the water and play chess”.  Daaaaamn!  If I had more time (and it wasn’t raining) I would so of gone down to play a game of chess.

So we parted ways, agreeing that if I come back to Detroit (and trust me, that is already in the works), we would meet up again, take more time to chat and play our game of chess.

You never know who you are going to meet when you travel.  I have to say that I was lucky to have had this chance encounter with a really nice guy, a man of his word, a man of pride… with damn nice shoes!