Budding photographers often hear the “Shoot in RAW!!!!” when they first start out.  Most do, some don’t.  Some pros shoot RAW, some don’t.  Personally, I always shoot RAW.

What is RAW?  I don’t want to get in a big technical discussion as to what RAW really is (you can google that).  It is an image format type that more advanced cameras shoot in.  They call it RAW because all the image data is stored.  Compared to JPEG (which is also an image format type, and the standard for most consumer cameras), which has the camera doing some processing on the image before saving it on your memory card.  The fun of JPEG is that the image is pretty much ready to print, and you can somewhat tweak the processing (colour, sharpness and so on) directly in camera.

Press shooters shoot in JPEG as they require a quick turnaround with their images and don’t have time to process, add to that the fact that the size of a JPEG is way smaller than a way allowing for faster burst shooting and so on, I still always always shoot in RAW.  I don’t need to riffle off 15 images back to back and I prefer having all the data to play with in post processing.  I prefer to chose what happens to the image rather than let the camera decide.

But the big thing is that there is a lot more data in the image.  Probably way more than you think!  Sure, it requires more memory cards as a single RAW will be 25mb (if not more) while a good size JPEG will be 8-9mb. (yes, correct me if my numbers are off haha).  A standard 16g memory card will hold 600 RAWs.  Other than weddings and major events, one card is all I need.  You can fit thousands of JPEGs are the same card.

A few weeks ago at the Bloc Party show, there were a bunch of strobes going off.  I was trying to get a shot of the drummer (which is one of the instances where I burst shoot).  So I was shooting while the strobes were going off.  I ended up getting this image (straight out of the camera). 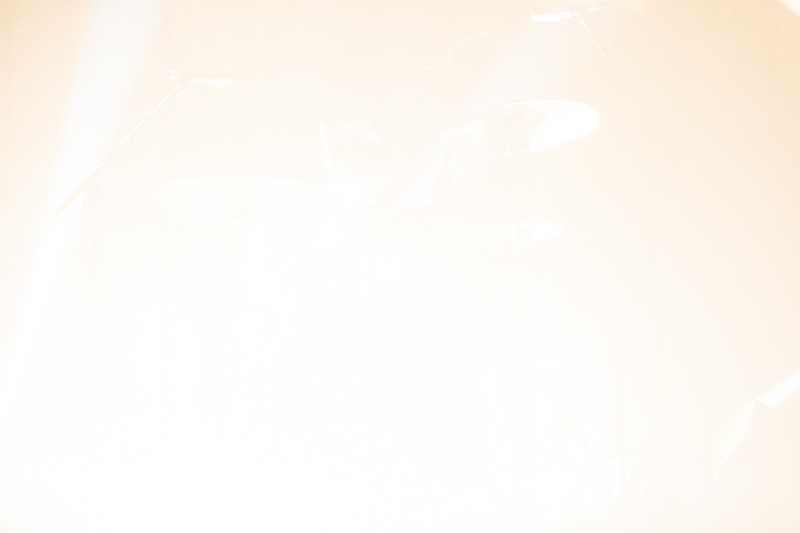 I usually don’t delete photos until a month or so after the gig.  Once I was done my media images, I went back and started to play with images like this one.  I was actually a bit shocked when I hit AUTO in Lightroom to see what was behind the image. And after some extra tweaking and playing around, I ended up with this as a final photo: 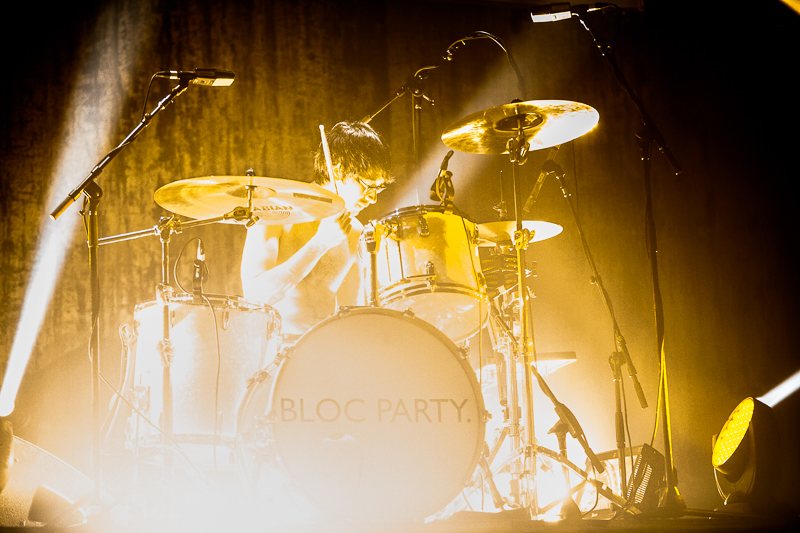 Is this an epic moment?  No.  Still a more funky artsy shot.  But it does show you the power of having RAW data.  The image still needs to be in focus and all, but image if this was an epic show moment that was ruined by a strobe, a fan’s camera flash or anything else?

Someone asked if I could tell them the settings I used for processing.  So here is a print screen of the basic settings in Lightroom.  Yes, pretty damn heavy processing to get the result.  I’ll leave the other settings such as colour treatment and tone curve up to your imagination. 😉 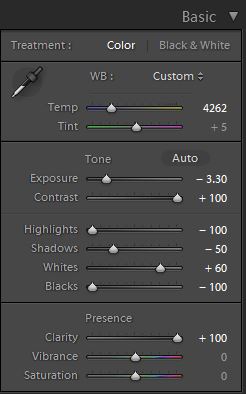