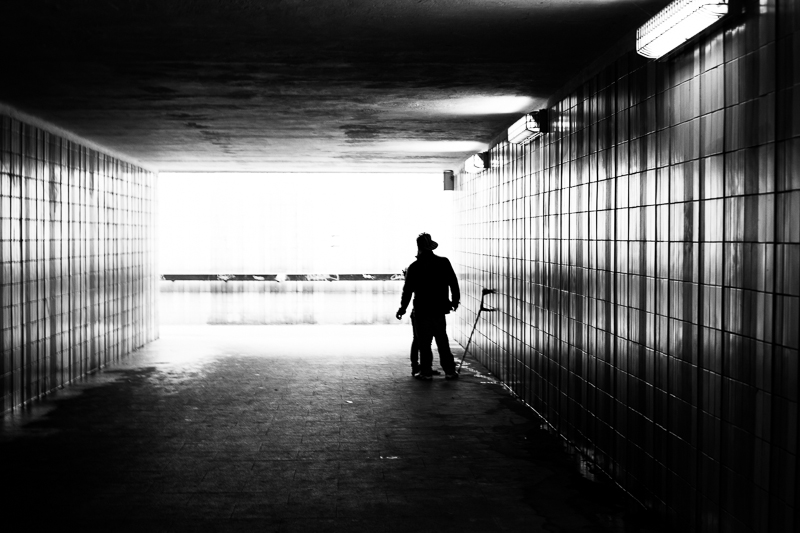 I know, weird title for a photo, right? Here’s a bit of the backstory…

Towards the end of the Prague leg of our trip, we needed to pick up a train ticket to head off to Berlin. Prague has this cool way of getting accross busy streets… they are called… tunnels! I know, these people are brilliant!

We made our way down a tunnel to get to the train station and it gave us a weird feeling. It was damp (it had been raining), and there were some odd people kinda just hanging out and talking in hushed tones.

We hurried our pace a bit as it turned out, this was a popular place to deal drugs (and also shoot up as per the few needles we saw on the floor). As we walked through the series of tunnels to get to the right exit, I turned to one side and saw the image above. Something about the contrast with the bright light in back and the reflection of the lights on the wet walls was just so fitting for the moment.

Why call this one addiction?  Well, part goes with the backstory of where we were.  The overall gloomy feel of the image with the classic “white light at the end of the tunnel”.

I didn’t have much time, as this wasn’t the place I wanted to linger for too long. So I basically stopped for half a second to grab quick focus and shot, and then moved on. This is typical of how I do street photography, you don’t want to stay too long as the moment will be broken by the person seeing you.

Settings wise, this was shot with a 50mm lens. I loved traveling with only 1 lens (well, also had a 16-35, but usually kept one lens on for a while before changing). As it was kinda dark, my settings were at f/4 and 1/30 shutter. Why f/4? That was the aperture it was on and I really didnt think of changing it. Also didn’t have much time to get the image.

Image captured, made our way through the rest of the tunnel and got our train ticket. Had to walk back again, and this time, the people were no longer there. The joy of capturing a moment and a image that won’t be seen again (at least, by me 🙂 )