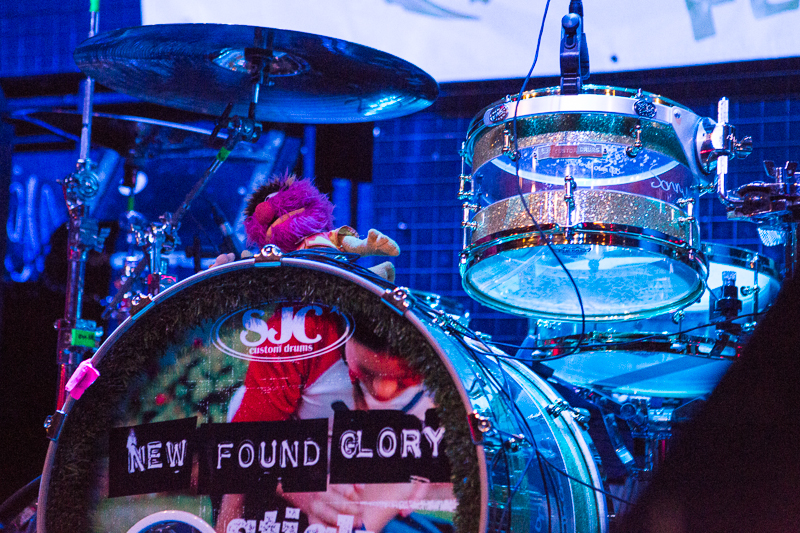 Let me preface this whole thing by saying that in my years of shooting shows, I have never wussed out of shooting in a packed venue.  Rock, metal, punk, whatever… bruised knees, hits in the head from crowd surfers… you name it, I’ve had it happen.  Well, no broken teeth (yet).

But tonight’s New Found Glory show was pretty much my limit.  Probably because I didn’t NEED images from their show.  I was there to shoot Dead To Me (who were awesome, photovideo to come soon), and decided to stick around for New Found.  I had shot them before, I knew they are intense as hell on stage.  If I was actually working, I would of just gotten the shots.  End of the story.  Really.  I swear.  Don’t judge me.

The back-story of the show is that it was originally scheduled for the way bigger Metropolis during this year’s Pouzza Festival.  For whatever reason (I assume lack of ticket sales?), the show was moved a few doors down to the Foufs, which about 1/3 the size of Metropolis.  For this fact alone I wanted to at least see the show as getting to see a band in a small venue is always a treat.  I had my gear, I had my GoPro to put on top of the camera, so why not shoot?

The crowd totally changed over from the Dead To Me set to New Found.  Just a whole different set of fans with a totally different vibe I guess.  I made my way with a friend photographer to the front of the stage to get some shots from the start, as making your way to the front while the crowd is moshing can be pretty hard.  About 5 minutes before the show started, the crowd was dense… and I mean DENSE!  Chatted with some of the fans around, a few apologized ahead of time for running into me.  LOL.  Ok, it’s going to be one of those.

Lights went down, crowd started to roar… and push.  But that’s cool, you expect that.  After a few notes, the pit started going and people started stage diving.  And within a few seconds, I could barely keep my camera up to shoot, so I made my way out to the side.  Hell, I don’t owe anyone images, so rather not put my gear at risk just for fun.  Got a few shots but had a great laugh at the whole situation.  As my fellow photog was following me out, she suddenly started to get sucked back into the crowd!  Like the crowd was alive and wouldn’t let her leave (ok, it’s 3am and my imagination is kicking in).  Was pretty odd (and hella funny) to see… she was…just…disappearing!  Her hand came up in a “SAVE ME” kind of way, so I grabbed it and pulled… and I had to pull hard to get her out of that crowd.  haha.

Yeah… wussing out at New Found Glory.  Thats my Pouzza moment for 2013!