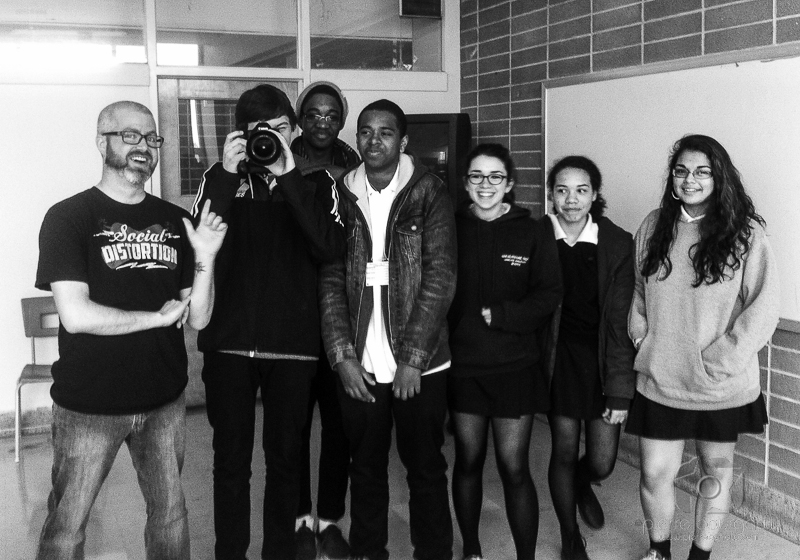 A month or so ago, I was approached by Andrea at the EMSB (English Montreal School Board) about presenting what I do during their annual career day.  Well, by approached, I mean we were having coffee one afternoon and she asked if I wanted to participate.  She was handling the “Jobs in the Media” portion of the career day.  There were a bunch of other presenters, from firefighters, the military, hair dressers, lawyers and many many more.

I was first scheduled to do the morning presentations.  Now, those who follow my regular day-to-day stuff know that I’m not a morning person.  Hell, I’m usually up around 10am, so morning don’t really exist for me.  Going down to the school for 8am would have been… interesting.  Thankfully, the other media presenter, co-anchor of CBC Montreal’s supper time news, Andrew Chang, asked if he could be moved to the morning.  Score!  I can sleep!

I got to speak to 3 groups of approx 20 students.  The photo above are some of the students from the second group. 🙂   I didn’t expect each of them to be paying full attention.  When I was their age (15-17 years old), I would easily zone out during things I wasn’t interested in.  So yeah, a few people slept.  At least I gave them a chance to catch up on some Zzz.

I tried to have a mix of factual information about not only being a music photographer, but also working as a freelance photographer.  It’s not easy.  Paycheques aren’t consistent.  Work hours are a bitch.  I have no health insurance and my time off isn’t paid.  But I wouldn’t change it for the world.  Why?  Because I have passion for what I do.  And this is what I tried to put across as a message… no matter what you decide to do, be it an accountant, auto detailing, photography, just do what you are passionate about.  Sounds corny, I know, but it is so true.  “You all are what, 16? The normal retirement age is now 65, that means you have a wonderful 49 years of working ahead of you.  Why not do something you love?  Even if someone tells you it’s stupid or you won’t make money.  Fuck that… just do what you want to do.”  A few of the kids seem to smile when I said that.  I got a few small “right on” fist pumps.  Was a pretty cool moment.   And seems that they liked it when I said fuck. 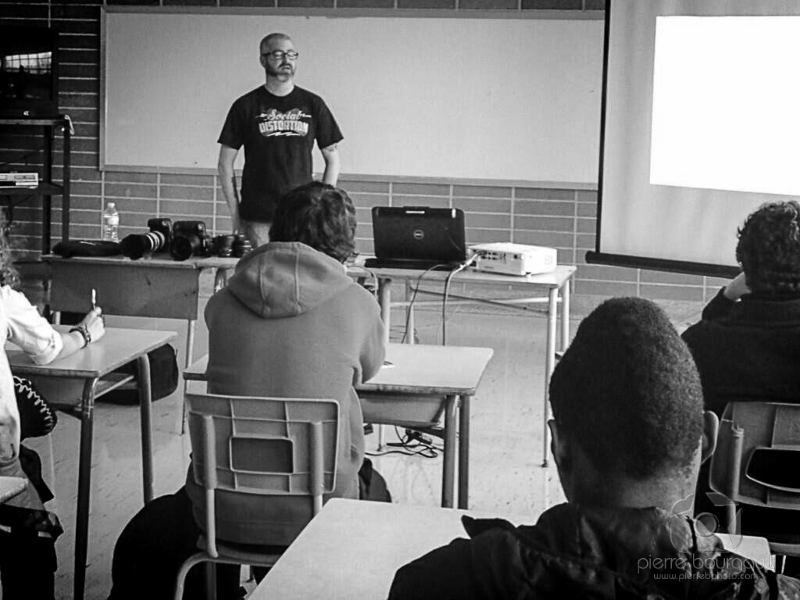 (love Andrea, but yeah, so much for capturing the decisive moment in a photo 😉 )

First group went WAY too fast.  I didn’t have a chance to get through all my stuff!  Second group, I sped through and ended up with 10 minutes to kill.  Holy hell those 10 minutes can be soooo long.  Third group, I finished on time.  I touched on my path in life, and most seemed to get a kick that I was open about totally failing out of CEGEP because I had no interest in what I was doing.  They also enjoyed the use of swear words.  I told them up front I can swear a bit when I’m into what I’m saying.  Each time I said fuck, they laughed.  Ah well.  I am who I am.  Although when their guidance counselor stepped in for a few minutes, I was on my best behavior.  Didn’t want to be kicked out of school (again haha).  Andrea, who was sitting in the back, told me all that was going through her head was “don’t swear, don’t swear”.   No worries, I can pick my audience 😉

A few of the kids signed the “I want more info” sheet and put their emails down.  Three kids came to talk to me after my presentation.  One wanted to work in cinema, producing and behind the scenes stuff and looked genuine about it.  I love seeing kids with passion for something.  He asked for my business card and if it was ok we keep in touch.  Hell yeah dude, any time.  I’m not your best go to guy, but if I can pitch in advice or just motivate, I’m there.

What questions was I asked?  Weren’t a whole many as I had more than enough material.

Do you travel a lot? – before I could answer, another kid spoke up.  “He is doing this out of passion and loves his work.  I get the sense that he’s flat broke and doesn’t travel anywhere”.

The kid then looked up at me and apologized for assuming things, but I thought it cool that he was paying attention lol.  Told him I’m not flat broke, but it’s like being a hockey player and wanting to play in the NHL.  There is such a small subset of people who actually make it there.  And photography is the same thing.  There are only a few people who are paid by Rolling Stone to fly around the world.  Which is when another girl spoke up “Then who do I need to call to get you in Rolling Stone.  Your work is awesome, you deserve it”.

Ah kids.  I try to motivate them, and they end up motivating me. 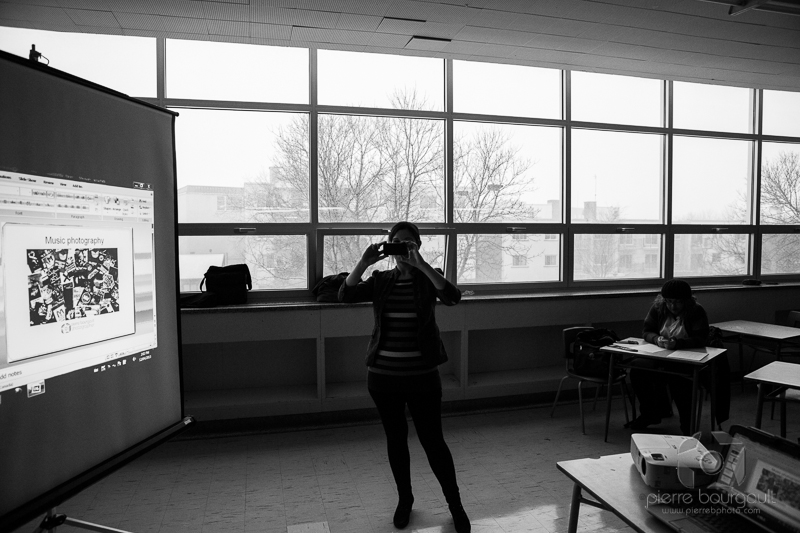 (here is what the student shot in the header image up top haha.  He actually took 14 of these, I left the camera on high speed shooting hehe)