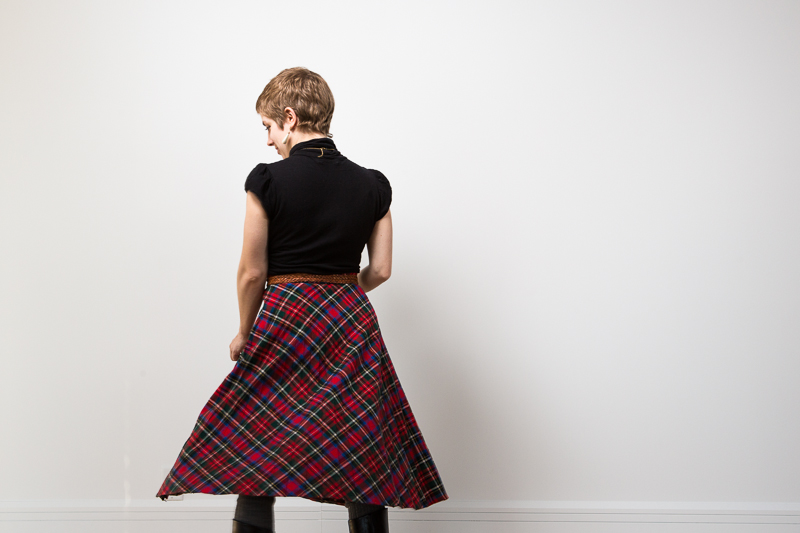 She is a graphic designer, photographer and runs her own online vintage clothing shop (and is also a friend of mine 😉 ).  She often shops at flea markets, thrift stores and other places and has an eye for picking out unusual yet interesting pieces which she then flips and sells on her store (or if the find is really funky, probably just keeps it for herself). Into reducing her ecological footprint and living a healthy and happy life, she had approached me not too long ago about needing some more professional looking images on her blog of her clothes.  We met up a few days ago and had our first photoshoot.  On top of getting her some nice images, we are also trying to define a style and feel for the images.  I had never worked with Emily before (well, not like this), and as style defining is not something that is up my alley, we went with what we had and are going to work from there to really get something that works with what she does.

For our first venture, we went with shooting in a condo with a nice white wall.  I don’t often have the chance to do this type of on-location-white-wall-fashion-blog-style shooting, so sounded like a good place to start.  After slightly redecorating the condo (ie moving furniture out of the way), this is what we ended up with.  When shooting indoors in a room that has a decent amount of natural light, you have a few options.  You can decide to only use the natural light in your images or you can set up some strobes (or in my case a couple of flashes) and create / control the light.  Both options can work.  However, shooting with natural light, you can sometimes be stuck with inconsistent lighting due to clouds outside, the sun changing positions and so on.  So I opted for the more controlled use and setup two flashes and umbrellas.  It also makes for a more interesting blog entry haha. 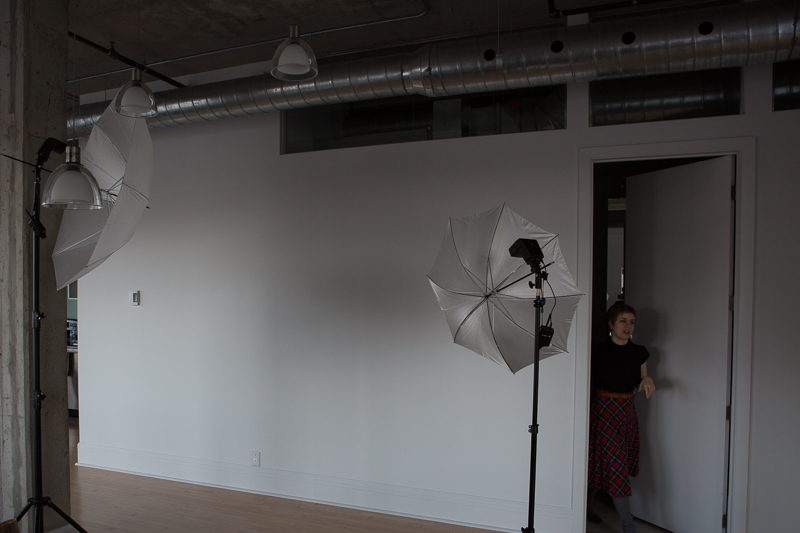 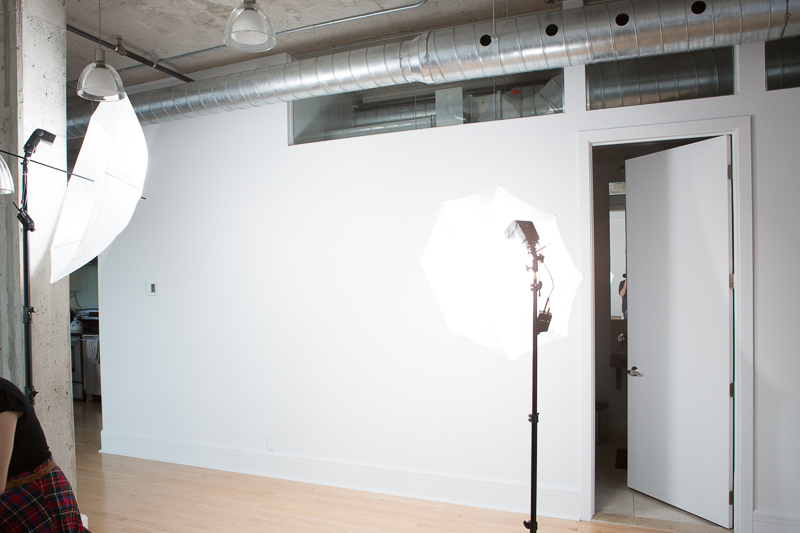 This wall was the longest of the walls in the place.  But things I had to keep in mind while shooting were the opening on the top for the pipes, the light fixture and the electrical outlet.  On a white background, things like this can easily be photoshopped out, but I’m of the mind that I should get things right in camera before taking the picture so as to minimize the post processing.  So simply chosing a good angle or having her move in a way that would hide the outlet was always in the back of my mind.

Why am I using two lights?  Could this of been done with just one?  Sure, it probably could of.  The reason behind the two lights is that I wanted to ensure that I had enough lighting all around and not too many shadows as the point of this shoot was not a portrait of Emily but more showing off the clothes she has.   The left flash is the main flash and was higher powered than the right flash.  Although they weren’t far apart, as I wanted to keep more even light all around.  So with this setup, and having moved the lights and played with the power some, here is what we came up with: (she did get a bunch more images than these 😉 ) 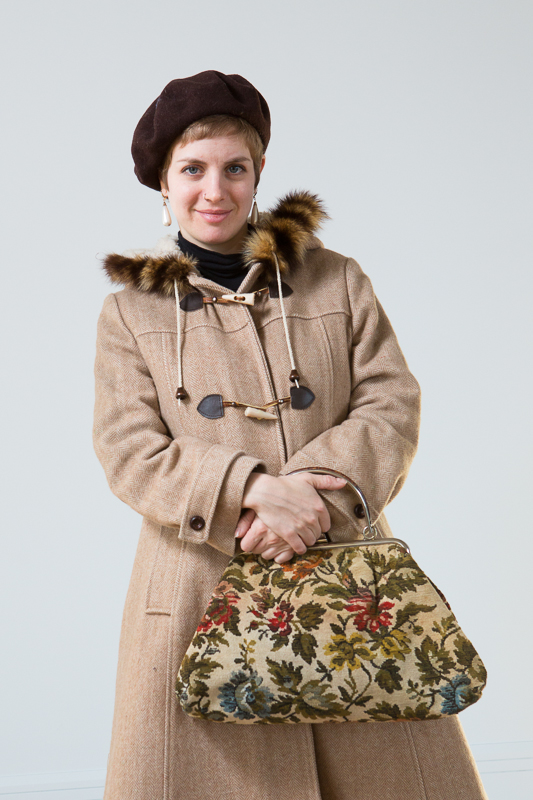 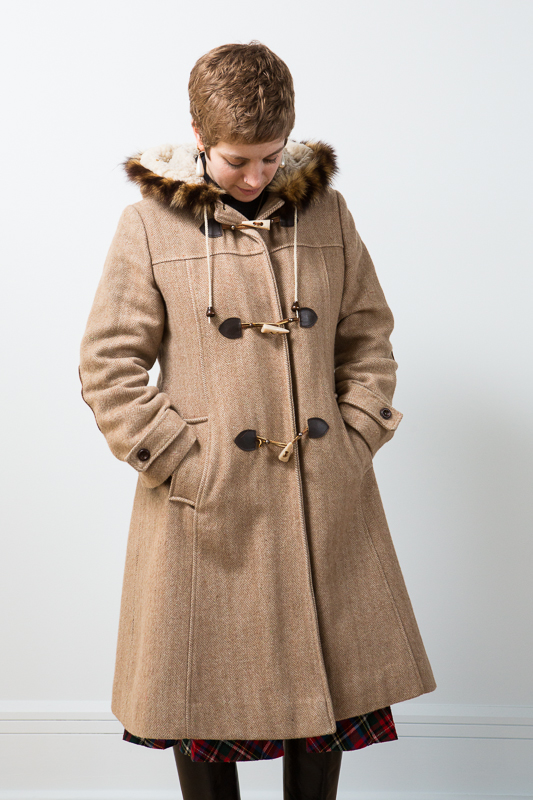 The fun of having a longer wall… TWIRLS!

And as everything she was wearing was vintage, why not get some closer ups of the socks and the jewelry! 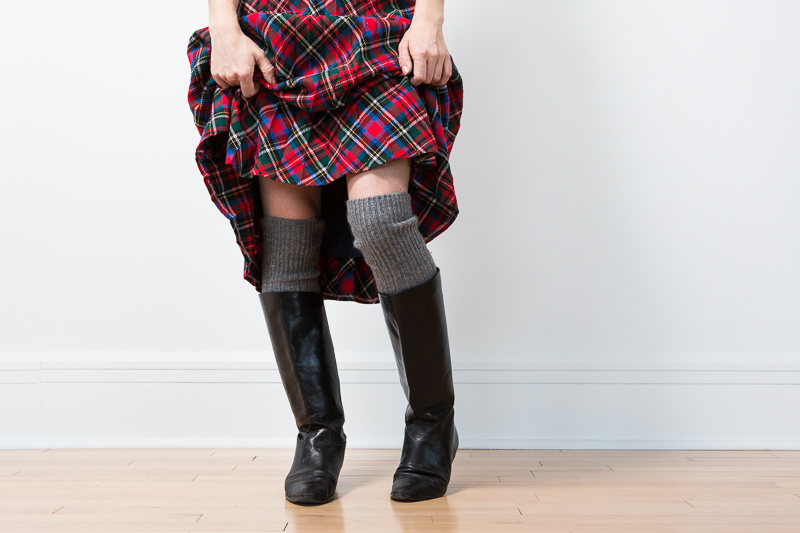 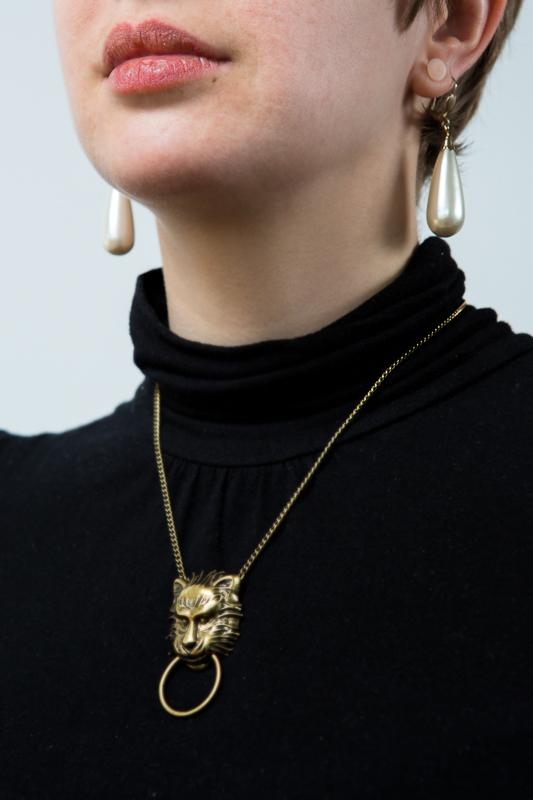 As we were walking into the place, I was intrigued by the hallway.  It had an interesting vibe to it, very industrial (I learned that the building the condos were in used to be a sweater factory).  So we took a few images in the hallway, just playing around to see what could be done.  Didn’t go with what Emily’s blog is, but was still fun!

The first image below is a single flash to camera left.  Not too interesting an image as the background is far away and pretty dark.  Gives her a typical snapshot feel. 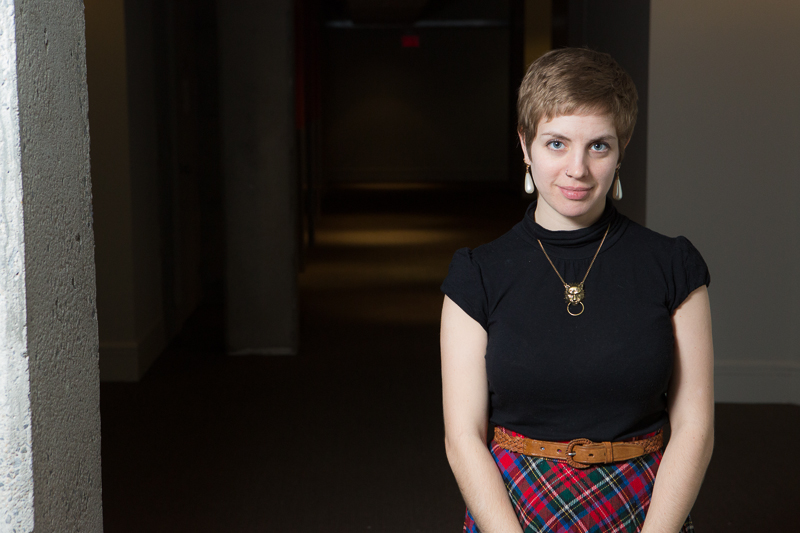 So to spice up the image a bit, I placed a flash in the back end of the hallway and kept it low power.  You’ll notice the flash on the right hand side near her elbow in the image below.  Add a natural smile (usually brought on by me acting stupid), vertical composition to play off the lines in the hallway, and you have something a bit more usable.  A bit of image cleaning could be done to remove the security lights on the top right and such, but this was just for fun to see what we could pull off quickly.  This can so of been played with further for a more sci-fi / Outer Limits feel.  Stronger flash, placed behind her pointing at the camera, more intense look… yep, gotta remember this place. 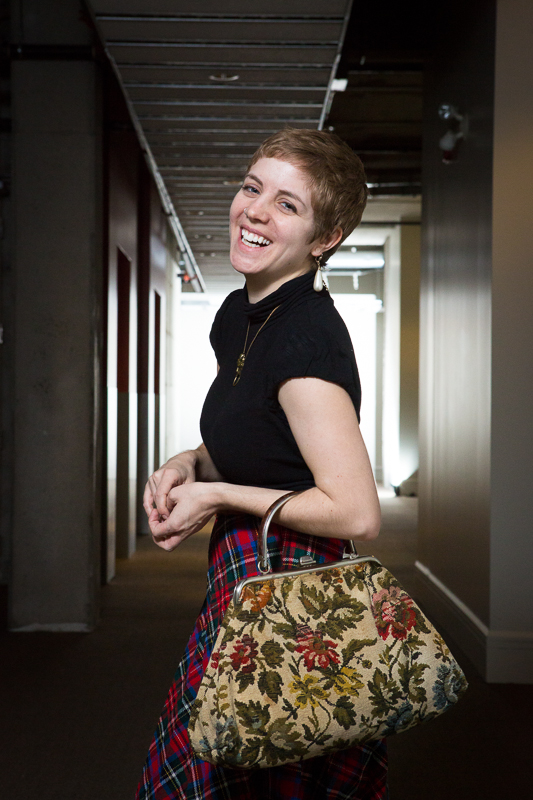 Had a great time with Emily and can’t wait to see what our next shoots will give us.  If you didn’t click on the shop link at the start, you can click here to check out Emily’s site.

In need of portraits?  Have an idea you want to collaborate on?  Feel free to contact me!